Useful synergies continue to emerge among our instruments as we ponder the future of exoplanet studies. Consider the European Space Agency’s PLATO mission (PLAnetary Transits and Oscillations of stars). Operating from the L2 Lagrangian point, PLATO will use 34 telescopes and cameras on a field of view that includes a million stars, using transit photometry, as Kepler did, to find planetary signatures. Working at optical wavelengths, PLATO will look for nearby Earth-sized and ‘super-Earth’ planets in the habitable zone of their stars.

This mission is scheduled to be launched in 2024, an interesting date because it’s also the year that the European Extremely Large Telescope (E-ELT) is scheduled to see first light. Huge new installations like these, although ground-based, are so powerful that they should be able, with the help of adaptive optics, to study planetary atmospheres on the PLATO-discovered planets. Thus we get the best of both worlds, with repairable and upgradable ground telescopes fleshing out the data gathered by our space instruments, just as today we can use Kepler data to find planet candidates and then confirm them using radial velocity studies from the ground.

The TESS mission (Transiting Exoplanet Survey Satellite) launches earlier (probably in 2018) but offers the same kind of synergies with other instruments. Both TESS and PLATO, for example, will hand off data to the James Webb Space Telescope, scheduled for a 2018 launch. Here again we can look for deepened studies of the targets other missions have found. And in the process, we can be assured that we’ll enrichen our catalog of extrasolar worlds. 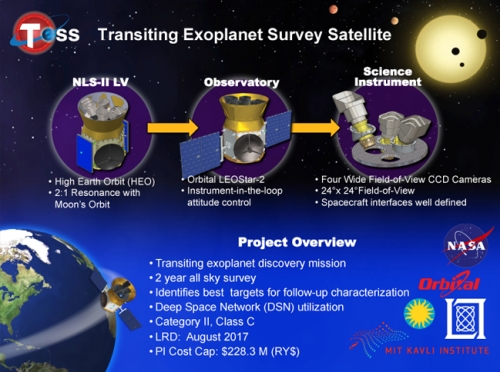 Just what we might find is the subject of new work by Michael Hippke (Institute for Data Analysis, Neukirchen-Vluyn, Germany) and Daniel Angerhausen, a postdoc at NASA GSFC. Writing in The Astrophysical Journal, the duo explain in one recent paper that while planets with sizes and orbits similar to Mars or Mercury will be out of reach (around solar-class stars, at any rate), planets the size of Venus or Earth should show up readily for TESS and PLATO. The optimum target for life-hunters, of course, is an Earth-class world in an Earth-like orbit, and both instruments are believed to be capable of finding these. From the paper:

In this work, we have shown that future photometry will be able to detect Earth- and Venus-analogues when transiting G-dwarfs like our Sun… Larger sized planets (> 2R⊕) will be detected in a single transit around G-dwarfs, in low stellar noise cases, and assuming one can find them in the first place. The search techniques for such single transits will require further research and validation, and will likely be performed remotely, due to the large storage requirements.

But Hippke and Angerhausen’s interests extend beyond planets. They believe that a large planet like Jupiter that has several large moons should produce a characteristic signature, allowing its ‘exomoons’ to be detected. The detection would be marginal, as Angerhausen explains: “We wouldn’t have a clear detection, and we wouldn’t be able to say whether the planet had a single large moon or a set of small ones, but the observation would provide a strong moon candidate for follow-up by other future facilities.”

Let me drop back quickly to one of Hippke’s papers from early 2015, which explored exomoon candidates from the Kepler data, using what is known as the orbital sampling effect, which stacks numerous planet transits and tries to extract an exomoon signature. In this paper, Hippke used numerical simulations to inject exomoon signals into real Kepler data. This is useful because it shows us that there is a size limit to what we can find, one that TESS and PLATO should be able to improve on. The paper finds that for suitable planets with orbits between 35 and 80 days, an exomoon’s detectable radius is approximately 2120 kilometers, or about a third the radius of Earth, while for longer period planets, even larger moons are the minimum.

Such moons go beyond what we generally see in our system, but as the paper notes:

…our solar system might not be the norm – we have no Hot Jupiters, warm Neptunes, or Super-Earths in our solar system, and thus no reference for typical moons around such planets. Also, there is a strong selection bias, based on the detection limits…, and in addition the simple fact that the strongest dips are most significant. The first moons to be found will likely be at the long (large/massive) end of exomoon distribution, as was the case for exoplanets.

Hippke is surely right that the first moons found will be at the larger end of the size range, just as the first exoplanets we detected were massive worlds in close orbits that were the easiest to see with our instruments. For more on Hippke’s work and the methods he employs, see the article he wrote for Centauri Dreams, Exomoons: A Data Search for the Orbital Sampling Effect and the Scatter Peak.

But back to the Hippke and Angerhausen paper I started with. It notes that while the detection of moons will remain problematic for planets analogous to those in our own system, moons around planets orbiting quiet M-dwarf stars should be easier to detect. This paper, “Photometry’s bright future: Detecting Solar System analogues with future space telescopes,” focuses in directly on the capabilities of instruments like TESS and PLATO in offering datasets beyond Kepler’s.

The OSE can be used to detect a significant flux loss before and after the actual transit (if present), which might be indicative of an exomoon in transit. The basic idea is that at any given transit the moon(s) must be somewhere: They might transit before the planet, after the planet, or not at all – depending on the orbit configuration. But by stacking many such transits, one gets, on average, a flux loss before and a flux loss after the exoplanet transit.

And bear in mind that moons are only one of the things we might expect to extract from TESS and PLATO data. Right now we have one detected ring system, around the planet J1407b, a massive ring more than 200 times larger than Saturn’s. The authors show that a transiting planet with a ring system produces a definitive signal. Even Trojan asteroids, which lead and follow a planet by 60 degrees in its orbit, should be in range for detection. In a third paper, the authors use Kepler data, injecting synthetic Trojan light curves to search for the limits of detectability. From the paper:

Our result gives an upper limit to the average Trojan transiting area (per planet) corresponding to one body of radius < 460km at 2σ confidence. We find a significant Trojan-like signal in a sub-sample for planets with more (or larger) Trojans for periods >60 days.

The authors call these results tentative and suggest that improved data from TESS and PLATO should help us refine them. “As good as the Kepler data are, we’re really pushing them to the limit, so this is a very preliminary result,” adds Hippke in this NASA news release. “We’ve shown somewhat cautiously that it’s possible to detect Trojan asteroids, but we’ll have to wait for better data from TESS, PLATO and other missions to really nail that down.”

All of which tells us that we have much to expect from TESS and PLATO and the instruments that will subsequently home in on the targets they have provided. The papers are Hippke, “On the detection of Exomoons: A search in Kepler data for the orbital sampling effect and the scatter peak,” The Astrophysical Journal Vol. 806, No. 1 (abstract / preprint); Hippke and Angerhausen, “Photometry’s bright future: Detecting Solar System analogues with future space telescopes,” accepted at The Astrophysical Journal (preprint); and Hippke and Angerhausen, “A statistical search for a population of Exo-Trojans in the Kepler dataset,” accepted at The Astrophysical Journal (preprint).