An old friend used to chide me about the space program, asking good-naturedly enough why it mattered to travel nine years to get to a place like Pluto (this was not long after the New Horizons launch). ‘Just another rock,’ he would say. ‘Why go all that way to look at just another rock?’ Although we had many disagreements, Abe was one of the shrewdest people I’ve ever known. I had met him when he was in his sunset years, but in his prime he had run a large financial operation, been the subject of a story on the front page of the Wall Street Journal and had made a serious fortune in real estate speculation.

So what about this ‘just another rock’ meme? Abe died a few years back but I think about him in relation to things like yesterday’s story on Charon. The point is, it’s not just another rock. It’s this particular rock. And maybe it’s not a rock at all; maybe it’s a ball of icy slush. And maybe, as we’ve learned, it’s a seriously interesting thing that surpasses expectation. Each time we get to one of these places, or study a planet with transits and radial velocity methods, we’re seeing something never seen before. It may be able to teach us about conditions far different from those we experience and explain deep questions about the history of our own solar system.

Beyond that, each new ‘rock’ is part of a process of building understanding. We need to know what is around us because while we cannot solve all mysteries, we are compelled to solve the ones in front of us, the ones we can get to or develop the tools to investigate. The thing is, each time we go looking we seem to find something surprising, and then we need an answer for the conundrum. It’s a process that presumably began early in the development of our species.

I used to kid Abe by responding, ‘What does another dollar matter? It’s just another dollar.’ He got the point. Abe had a natural touch with money and knew how to make it multiply. Each new business venture was for him a kind of exploration. We just differed in the direction of our passions. I’ll take Charon or GJ 1214b over stock exchanges in New York or Tokyo, and that’s probably while you’ll never be reading about me on the front page of the Wall Street Journal.

So let’s talk about exoplanets. GJ 1214b is likewise ‘just another planet’ when viewed with the wrong filter. Viewed as we view things on Centauri Dreams, it’s one particular planet, and like so many we’ve found, it has its own set of things to teach us. Its star, an M-dwarf, is 42 light years away in the constellation Ophiuchus. Consider this planet a ‘mini-Neptune,’ one of the first discovered. What makes GJ 1214b so interesting is that it’s so close to our own system and gives us such a rich transit signature every 1.6 days. 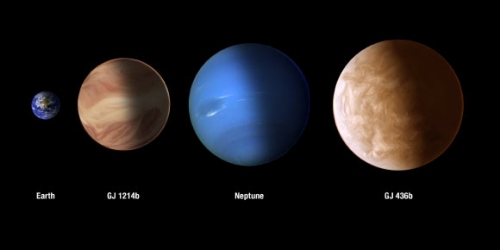 We can use what is called transmission spectroscopy to study the atmospheres of places like this even though we can’t actually see the planet other than through its light curve. A planet passing in front of its star as seen from Earth offers us the opportunity to parse starlight that has been filtered through its atmosphere. The spectrum thus produced tells us about the composition of that atmosphere, its molecules and dust grains. It’s a method that has been used with great effect on worlds like HAT-P-11b and the ‘hot Jupiter’ HD 189733b.

The problem is, when we apply the techniques of transmission spectroscopy to GJ 1214b, nothing much happens. Studies using the Hubble instrument see little variation, a ‘flat spectrum’ that rules out an atmosphere of hydrogen, water, carbon dioxide or methane. Something in the planet’s atmosphere is evidently blocking out light. In a new paper, Benjamin Charnay (University of Washington), working with the university’s Victoria Meadows and several other researchers, has been attacking the problem, setting up models of varying atmospheric temperatures and composition that simulate a three-dimensional cloud structure.

Using a climate model developed by Charnay’s former research group in Paris, the scientist applied models previously used to study Titan to this intriguing exoplanet. GJ 1214b is close enough to its star that atmospheric temperatures are high, exceeding the boiling point of water. Clouds on a world like this would, Charnay believes, most likely be made of potassium chloride (KCl) or zinc sulfide (ZnS), lifted high into the atmosphere to produce such a flat spectrum. The model relies on a robust atmospheric circulation to boost these clouds to altitude.

But there is another potential source of GJ 1214b’s flat spectrum: A photochemical haze. Charnay is now looking at modeling hazes that could produce the same kind of spectrum. Data from the James Webb Space Telescope, scheduled to be launched in 2018, will be needed to rule out alternatives. Assuming 0.5 µm particles (necessary to produce the flat spectra observed), the paper finds that potassium chloride clouds produce a constant reflectivity at visible wavelengths, while zinc sulfide clouds do not absorb at 0.5 µm, producing a peak of reflectivity. Organic haze, on the other hand, strongly absorbs at short visible wavelengths.

A stratospheric thermal inversion should show up at infrared wavelengths. From the paper:

The observation of a few primary/secondary eclipses or full orbits by JWST could provide very precise spectra and phase curves revealing GJ1214b’s atmospheric composition and providing clues on the size and optical properties (i.e. absorbing or not) of clouds. Non-absorbing clouds would suggest KCl particles. Absorbing clouds would favor ZnS particles or organic haze. In that case, the best way for determining the composition of cloud particles would be direct imaging or secondary eclipses/phase curves of reflected light in the visible. The different clouds/haze have characteristic features in visible reflectivity spectra. Future large telescopes such as ELT may have the capabilities for measuring this.

Charnay’s model shows how potassium chloride or zinc sulfide clouds would be created and lifted into the upper atmosphere, while also predicting the effect the clouds would have on planetary weather. The atmospheric circulation in this model is strong enough to carry KCl particles to high altitude regions while producing a minimum of cloud cover at the equator.

Just another rock? Look what we’re doing here: We’re studying layers of atmosphere on a planet we cannot see by using the spectroscopic signatures produced by a star 42 light years from the Sun. In astronomical terms, of course, that’s close, and GJ 1214b’s proximity makes it ideal for the study of mini-Neptunes. Moreover, it may be useful for understanding how our own planet’s atmosphere has changed over time, as Charnay notes in this UW news release:

“Worlds like Titan and this exoplanet have complex atmospheric chemistry that might be closer to what early Earth’s atmosphere was like. We can learn a lot about how planetary atmospheres like ours form by looking at them.”

The trick is in knowing what to look for and developing the tools to investigate — later resources, both space- and ground-based, will then be brought to bear to further the analysis. Given the wild multiplicity of exoplanets, we’re sure to be applying lessons learned at GJ 1214b to other mini-Neptunes, and generalizing from there to broader models of atmospheric evolution. Uncovering things, learning, pushing deeper is a compulsive process. We all have our obsessions, but I can’t think of a better one than the drive to explain other worlds.