A Relatively Nearby Earth-Sized Planet

Given my abiding interest in red dwarf stars and the planets that circle them, I always keep an eye on what’s happening with the MEarth project. Two arrays of robotically controlled telescopes are involved in MEarth (pronounced ‘mirth’), one at the Fred Lawrence Whipple Observatory on Mt. Hopkins (AZ), the other a cluster of eight at the Cerro Tololo Inter-American Observatory in Chile. Both these arrays are controlled from MEarth’s offices in Cambridge (MA). MEarth is all about observing nearby M-dwarfs in the hunt for Earth-class planets.

My fascination in these stars is simply a result of the numbers. We’ve learned that M-dwarfs comprise as much as 80 percent of the stars in the Milky Way. Earth is not, in other words, orbiting the most common type of star out there. We also know that M-dwarfs host planets. If we learn that conditions on such worlds can support life, then we’ve dramatically expanded the search space for astrobiology. The prospect of a living world, probably tidally locked to its star, conjures images strange and wonderful, a world where shadows are permanent and half of the planet is an ice-covered waste, as Stephen Baxter recently portrayed in a planet called ‘Per Ardua’ that circles Proxima Centauri in his novel Ultima (Roc, 2015).

The latest news from MEarth comes out of MEarth-South, whose 40-centimeter instruments have detected an interesting light curve around the star GJ 1132, finding a dip of approximately 0.3 percent in the starlight. The signal, confirmed by other instruments in Chile, flags a planet that is roughly 1.2 times the size of the Earth, in a tight 1.6-day orbit. Given the star’s radius and the amount of light it blocks, researchers led by Zachory Berta-Thompson (MIT) calculate this is a planet with about 1.6 times Earth’s mass, a world that may well be rocky. 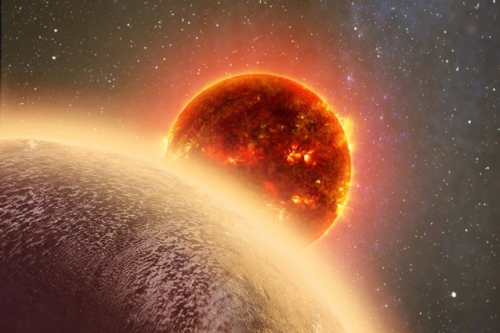 Image: In this artist’s rendering of GJ 1132b, a rocky exoplanet very similar to Earth in size and mass, circles a red dwarf star. GJ 1132b is relatively cool (about 226 degrees C) and could potentially host an atmosphere. At a distance of only 39 light-years, it will be a prime target for additional study with Hubble and future observatories like the Giant Magellan Telescope. Credit: Dana Berry.

The world is probably tidally locked. And life on GJ 1132b looks to be unlikely, given an estimated average temperature of 500 K (226 degrees Celsius). Says Berta-Thompson:

“The temperature of the planet is about as hot as your oven will go, so it’s like burnt-cookie hot. It’s too hot to be habitable — there’s no way there’s liquid water on the surface. But it is a lot cooler than the other rocky planets that we know of.”

That’s a useful fact because while surface conditions appear inimical to life, the planet is cool enough to retain a substantial atmosphere. GJ 1132 is a mere 39 light years from Earth, making it the closest Earth-sized exoplanet yet discovered. Recently we’ve been discussing the next generation of space telescopes, and now we find a world that will surely be a target for scrutiny, especially by the James Webb Space Telescope, which should be able to analyze the chemical constituents of the planet’s atmosphere and even detect the patterns of its winds.

“If we find this pretty hot planet has managed to hang onto its atmosphere over the billions of years it’s been around, that bodes well for the long-term goal of studying cooler planets that could have life,” adds Berta-Thompson. “We finally have a target to point our telescopes at, and [can] dig much deeper into the workings of a rocky exoplanet, and what makes it tick.”

Berta-Thompson points out that some 500 star systems are known to be closer to us than GJ 1132, and instruments like TESS (Transiting Exoplanet Survey Satellite) and CHEOPS (Characterizing Exoplanets Satellite), both scheduled for launch in 2017, will help us study many more targets. Learning how to analyze the atmospheres of nearby worlds is critical for our investigations into exoplanetary life. Planets like GJ 1132b will be useful in refining our tools as we begin to turn them to worlds with better prospects for living things.