The Most Distant Dwarf Planet Yet

Back in the days when Clyde Tombaugh was using a blink comparator to search for ‘Planet X,’ finding a new object in the outer Solar System was highly unusual. Uranus had been found in 1781, Neptune in 1846, and I suppose I should add Ceres in 1801, although it’s a good deal closer than the other two. The real point is that the Solar System seemed straightforward in Clyde Tombaugh’s day. There were eight planets and an asteroid belt. It wouldn’t be until 1943 that Kenneth Edgeworth argued that the outer system might have ‘a very large number of comparatively small bodies,’ with Gerard Kuiper publishing his own speculations in 1951.

Estonian astronomer Ernst Öpik first described what we now know as the Oort Cloud in 1932, with Jan Oort, a Dutch astronomer, reviving the idea in 1950. The Oort Cloud was a way to explain why comets behave the way they do. Oort believed that there must be a cometary ‘reservoir’ far away from the Sun — he chose 20,000 AU as a likely range because of the number of long period comets with aphelia at approximately that distance. Moreover, long-period comets seemed to come from all directions of the sky. As we’ve refined the idea and the numbers, we’ve begun to see just how vast the Solar System really is.

None of this is to take anything away from the discovery of the small world called V774104, announced yesterday at the Division for Planetary Sciences meeting in Washington, DC. Astronomer Scott Sheppard (Carnegie Institution for Science) and Chad Trujillo (Gemini Observatory, HI) have found a world 15.4 billion kilometers out, which works out to 103 AU and makes V774104 the most distant dwarf planet known, fully three times further from the Sun than Pluto. In Tombaugh’s day, such a discovery would have been front page news. Today we’ve come to assume that there are a lot of dwarf worlds out there, and expectations are that as our equipment improves, we’ll find plenty more. 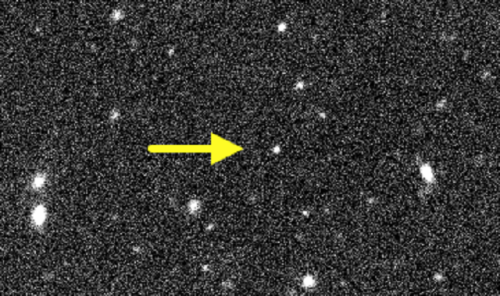 V774104 is currently estimated to be between 500 and 1000 kilometers in diameter, less than half Pluto’s size. Just how significant it is in the larger scheme of things has yet to be determined because we’re not yet sure about the parameters of its orbit. Is it, at 103 AU, close to aphelion, and will it eventually swing back toward Neptune, making its orbit the likely result of a gravitational encounter with that planet? Or is V774104 actually something far more unusual, a world similar to Sedna and VP113 in being a possible member of the inner Oort Cloud?

Neither Sedna nor VP113 comes close enough to the Sun to experience gravitational effects from the giant planets. In fact, both stay outside 50 AU, thought to be the outer edge of the Kuiper Belt, and have aphelia as distant as 1000 AU. Colin at the Armagh Planetarium site notes the problem in V774104: Could a Dark World Put a New Light on Solar System History?:

…the current highly elliptical orbits of Sednoids cannot be their original orbits, the chance of smaller bodies in such eccentric paths accreting into objects hundreds of kilometres across is fantastically low. Sednoids must have originally formed in relatively circular orbits, possibly in the Oort Cloud.

So how did they get where they are today? One possibility to explain their orbits is that they reflect conditions in the Solar System’s infancy, when the young Sun was in a local environment rich in nearby stars. The other possibility is one that Percival Lowell would have loved. There may be a large, rocky planet out there that has elongated previously circular orbits.

The data from the 8-meter Subaru instrument in Hawaii that produced V774104 have also yielded a number of other objects roughly 80 to 90 AU from the Sun, all of which will need lengthy follow-up study to clarify the nature of their orbits. Like V774104, any of these might join Sedna and VP113 in never coming closer to the Sun than 50 AU. We may be about to see a surge in the numbers of dwarf worlds in this unusual category. Explaining why a region once thought to be empty is not should occupy astronomers and theorists for years to come.

Next post: The Initiative for Interstellar Studies: A Three Year Update