Pluto and How We See It

As I did after yesterday’s post, I occasionally get requests for pictures of objects in natural color, as opposed to significantly enhanced images (at various wavelengths) designed to tease out structure or detail. Here are Pluto and Charon as seen by New Horizons’ LORRI (Long Range Reconnaissance Imager), with color data supplied by the Ralph instrument. The images in this composite are from July 13 and 14 and according to JHU/APL, “…portray Pluto and Charon as an observer riding on the spacecraft would see them.”

For those interested, Jenna Garrett wrote a fine piece for WiReD last summer called What We’re Really Looking at When We Look at Pluto that goes into the instrumentation aboard New Horizons and discusses the philosophical issues separating what we see from what is really there. Let me quote briefly from this:

It’s not hard for a photographer to understand why you’d question actually seeing Pluto—the same question has nagged photographers since Nicéphore Niépce made View from the Window at Le Gras in 1826. A camera is a simple machine: A lens and a shutter that allows the passage of light, which hits the chemical emulsion of film or the pixels of a digital sensor. That intervening technology takes photons bouncing off an object and interpolates them into data. More technology turns that data into an image. And still more technology disseminates that image so you might see it.

I don’t want to get too far into philosophy, but just for fun, here’s the Niépce image. 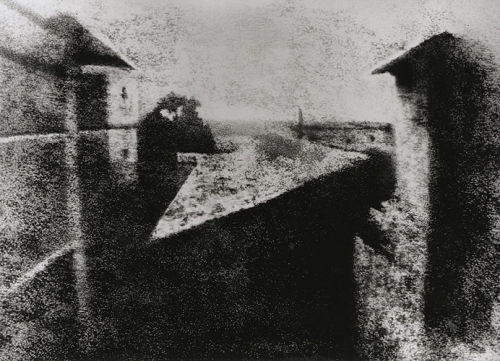 Image: The first recorded photograph, taken from a window in his study by Joseph Nicéphore Niépce. For more, visit this University of Texas site.

It’s always good to ask how images are processed, especially when dealing with data being returned from the edge of the Solar system through a number of instruments. New Horizons carries three imagers: The aforementioned LORRI and Ralph, along with Alice, an ultraviolet imaging spectrometer. Ralph has ten times the resolution of the human eye, but we use data as needed from the instrument packages to ferret out what scientists are looking for.

I also like this quote by Jon Lomberg, a deeply felt ratification of New Horizons from Garrett’s piece:

“You don’t really have to understand a lot about astronomy to know how difficult this is,” says Lomberg. “Getting it there, having it work for nine years and having it do exactly what they’re telling it to do. You just want to applaud. It makes everybody think Goddamn! that was a good thing to do!”

I’m sure that most of the Centauri Dreams audience is with Jon on that sentiment. But let’s move on to further news about Pluto from the Division of Planetary Sciences meeting in Maryland. In analyzing the New Horizons data, we learn that Pluto’s upper atmosphere is a good deal more compact and significantly colder than we had thought based upon earlier models. Pluto’s atmosphere seems to escape more or less the same way that atmospheric gases do on Earth or Mars, rather than acting as we would expect from a cometary body. Here is the already famous image that showed us ‘blue skies’ (of a sort) on Pluto. 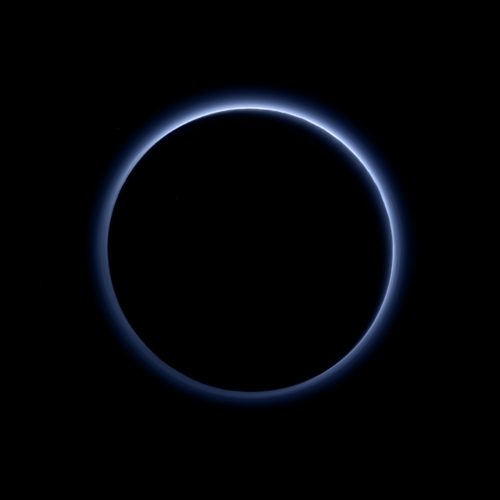 Image: Pluto’s haze layer shows its blue color in this picture taken by the New Horizons Ralph/Multispectral Visible Imaging Camera (MVIC). The high-altitude haze is thought to be similar in nature to that seen at Saturn’s moon Titan. The source of both hazes likely involves sunlight-initiated chemical reactions of nitrogen and methane, leading to relatively small, soot-like particles (called tholins) that grow as they settle toward the surface. This image was generated by software that combines information from blue, red and near-infrared images to replicate the color a human eye would perceive as closely as possible. Credits: NASA/JHUAPL/SwRI.

Here again we’re aiming at something close to what the human eye would perceive.

We also learned at DPS that Pluto’s moons are unlike anything we’re familiar with in the rest of the Solar System. Most inner moons in the Solar System (including ours) move in synchronous rotation, with one face always toward the planet. But the small moons of Pluto do nothing of the kind. Hydra rotates 89 times during a single circuit of Pluto, while the rest of the small moons rotate faster than we would expect as well. Have a look at the chart that Mark Showalter (SETI Institute) prepared for presentation at DPS. 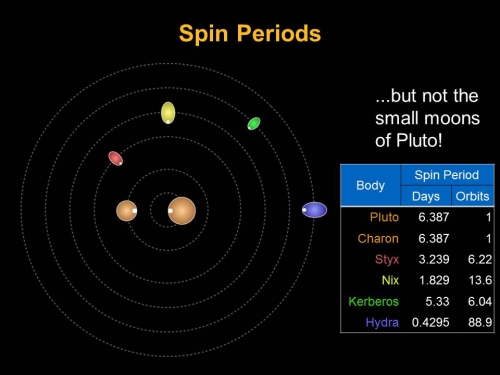 We may well be looking at chaotic spin rates — variable over time — and likely the result of the torque Charon exerts, which would keep the moons from settling into synchronicity. Showalter characterized these wobbling moons as ‘spinning tops,’ and it also appears that several of them may have been formed by merger, with two or more former moons coming together following the event that created Charon. That would make sense — surely there were a large number of objects after a massive impact, with the present system having consolidated from these. Here’s the slick video illustrating the motion of these moons that NASA has produced.

I love Showalter’s take on all this in a SETI Institute news release: “There’s clearly something fundamental about the dynamics of the system that we do not understand. We expected chaos, but this is pandemonium.”