Justin Atchison’s name started appearing in these pages all the way back in 2007 when, in a post called Deep Space Propulsion via Magnetic Fields, I described his work at Cornell on micro-satellites the size of a single wafer of silicon. Working with Mason Peck, Justin did his graduate work on chip-scale spacecraft dynamics, solar sails and propulsion via the Lorentz force, ideas I’ve tracked ever since. He’s now an aerospace engineer at the Johns Hopkins University Applied Physics Laboratory, where he focuses on trajectory design and orbit determination for Earth and interplanetary spacecraft. As a 2015 NIAC fellow he is researching technologies that enable asteroid gravimetry during spacecraft flybys. In the entry that follows, Justin reports on his trip to Jerusalem for this fall’s International Astronautical Congress.

by Justin A. Atchison 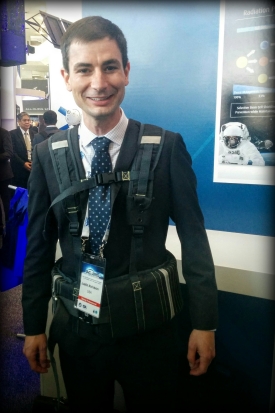 Greetings. I’m Justin Atchison, an aerospace engineer at the Johns Hopkins University Applied Physics Laboratory. I’m proud to have previously had my graduate research included on Centauri Dreams (1,2, and 3). Now, I’m guest-writing an article about the three most futuristic talks I saw at the International Astronautical Congress in Jerusalem this past October. I was able to attend the conference thanks to a travel fellowship through the Future Space Leaders Foundation (FSLF). I’d strongly encourage any student or young-professional (under 35) to apply for this grant next year. It’s a fantastic opportunity to attend this premier conference and interact with a variety of international leaders and thinkers in the aerospace field. FSLF also hosts the Future Space Event on Capitol Hill each summer, which offers engagement with US Congress and aerospace executives on the latest and most relevant space-related subjects.

Image: Justin in the IAC-2015 exhibition hall trying on a protective harness that minimizes radiation exposure to the pelvis bone, which is particularly sensitive to radiation due to its high bone marrow production.

So with that note of thanks and recommendation, I give you “The 3 Most Futuristic Talks at IAC 2015.”

1. An Approach for Terraforming Titan

The authors of this paper explore options for terraforming Titan in the distant future. Specifically, this means liberating oxygen and increasing the surface temperature.
In addition to having water-ice, Titan is a candidate for human settlement for a few compelling reasons:

However, Titan presents challenges for habitation, namely a lack of breathable oxygen and the presence of extremely cold surface temperatures (90K). The authors suggest that the solution to these two challenges is a nuclear fission plant that can dissociate oxygen from water and produce greenhouse gases.

Generating Oxygen – The main idea is to use beta or gamma radiation to set up a radiolysis process that converts hydrogen and oxygen atoms into usable constituents, including O2. This requires an artificial radiation source and a means of liberating the hydrogen and oxygen atoms from the native cold ice. They suggest a nuclear fission plant as the source of the radiation, and a duoplasmatron as the means of liberating and exciting the H and O atoms. The duoplasmatron would accelerate a beam of argon ions, which would be aimed at the water-ice. The collisions cause sputtering, where the argon ions literally knock O and H atoms out of the ice. These atoms are then collected and radiated to generate usable O2.

Heating Up the Atmosphere – At about 9.5 AU from the Sun, Titan receives only ~1% as much solar energy as Earth. The goal for raising the temperature on Titan is to capture and retain that limited energy. The authors consider the generation of greenhouse gases as the solution. There are two options they suggest:

The authors don’t estimate the total time required for terraforming, the size of the nuclear plant required to start the process, or the maximum theoretical surface temperature achievable, but they nonetheless posit a potential path forward for planetary habitation…and that’s a meaningful contribution.

How can present day humanity leave a message for distant future civilizations (human or alien)? This question first became an option with Carl Sagan’s famous Voyager Golden Record. The authors of this review paper evaluate the requirements and near term options available to store and interpret data for millions to billions of years in space. That’s a long enough timescale that you have to start to consider the lifetime of the sun (5 billion years) and the merging of the Milky Way and Andromeda galaxies (long term dynamics may destabilize orbits in the solar system). There are a variety of current efforts, most of which are crowd-funded, including: The Helena Project, Lunar Mission Project, Time Capsule to Mars, KEO, The Rosetta Project, The Human Document Project, One Earth Message, and Moonspike.

The data storage mechanism has to survive radiation, micrometeoroids, extreme temperatures, vacuum, solar wind, and geologic processes (if landed on a planet or moon). In terms of locating the data, the authors consider just about every option: Earth orbit, the Moon, the planets, planetary moons, Lagrange points, asteroids and comets, escape trajectories, and even orbiting an M-star. The Moon appears to be a good candidate because it remains near enough to Earth for future civilizations to discover, yet distant enough to avoid too common access (it can’t be too accessible or it might be easily destroyed by malicious or careless humans). One of the proposed implementations is to bury data at the lunar north pole, where regolith can be a shield against micrometeoroid impacts.

There are a variety of near-term technologies available for this challenge, including three approaches that could likely survive the requisite millions to billions of years:

As humans continue to send probes to unique places in the solar system, I hope that we’ll consider and incorporate these new technologies. Who knows–In a few million years, our “cave paintings” may be hanging in some intergalactic museum.

These properties, specifically the strength-to-weight ratio, make them candidates for things like space elevators and momentum exchange tethers.

The authors of this paper posit a different application for SWCNT: space based solar power. This is the concept where an enormous array of solar cells is placed in orbit around Earth. Power is collected, and then beamed down to the surface at microwave frequencies for terrestrial use. The main idea is to collect solar power outside of Earth’s atmosphere, which attenuates something like 50-60% of the energy in solar spectra. The spacecraft has access to a higher energy density of solar light, which it then beams down to Earth at microwave frequencies, at which the atmosphere is transparent. A second advantage is that high orbiting satellites have much shorter local nights (eclipses) than someone on the Earth (there’s only up to about 75 minutes of darkness for geostationary orbit).

In this paper, the authors describe an implementation of a solar power satellite that would use semiconducting SWCNT as the solar cells. Based on the authors’ analysis, it’s feasible to mature this TRL 4 technology to achieve a peak energy of 2 W/g at 10 cents per W. This is compared to current TRL 9 options that offer roughly 0.046 W/g at 250 dollar per W. The design is entirely developed from different forms of SWCNT, which are used to make a transparent substrate, a semiconducting layer, and a conducting base. The three-layered assembly would have a density of 230 g/m2, roughly a third of current technologies.

Additionally, the authors advocate for SWCNT based microwave transmitters, which could potentially be more efficient than traditional Klystron tubes and wouldn’t require active cooling.

As an added benefit, this type of SWCNT microwave source could potentially be used in the newly discussed (and certainly controversial) CANNAE drive. In the paper’s implementation, CANNAE propulsion would only be used for station-keeping…But it’s not hard to extrapolate and conceive of a solar powered, CANNAE-driven spacecraft for interplanetary exploration.

I have to admit, I’m a bit skeptical of the economics of space-based solar power concepts. But this paper is nonetheless exciting as it highlights the potential applications for this relatively new engineered material. I can’t wait to see how SWCNT are used in the coming decades and what new exploration technologies they’ll enable.