Oh to be in Hawaii for the Extreme Solar Systems III conference rather than simply following events on Twitter! The exoplanet community’s choice of venues for these gatherings is hard to beat, the first of them, in 2007, having occurred on Santorini, a storied island in the Aegean Sea southeast of the Greek mainland, with a 2011 follow-up in Jackson Hole, WY. If you haven’t been following events on Twitter (#ExSS3), you can at least check the full program with abstracts online, where you’ll see quite a few familiar names.

Alexandre Santerne’s session at ExSS3 is one I wish I could have sat in on yesterday. Leading an international team, Santerne (Instituto de Astrofísica e Ciências do Espaço, Portugal) has gone to work on Kepler detections of gas giants. You would think that planets of this size would be fairly straightforward detections, but it turns out that this is not the case. In fact, Santerne and team find that half of the giant exoplanet candidates are false positives.

To be specific, the group’s five-year radial velocity study of these candidate worlds using the SOPHIE spectrograph reveals that 52.3 percent are actually eclipsing binaries, while 2.3 percent are brown dwarfs. An eclipsing binary simply involves a binary star system aligned so that the larger star can eclipse the smaller and the smaller can transit the larger’s disk. Eclipsing binaries are a known issue in exoplanet detection but I don’t think anyone believed the false positive rate could be this high. Says Santerne:

“It was thought that the reliability of the Kepler exoplanets detection was very good – between 10 and 20% of them were not planets. Our extensive spectroscopic survey, of the largest exoplanets discovered by Kepler, shows that this percentage is much higher, even above 50%. This has strong implications in our understanding of the exoplanet population in the Kepler field.” 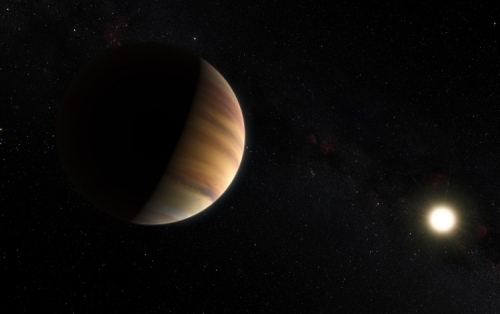 Image: This artist’s view shows the hot Jupiter exoplanet 51 Pegasi b, which orbits a star about 50 light-years from Earth in the constellation of Pegasus. This was the first exoplanet around a normal star to be found, in 1995. Twenty years later this object was also the first exoplanet to be be directly detected spectroscopically in visible light. Credit: ESO/M. Kornmesser/Nick Risinger (skysurvey.org).

The research reduced the 8826 objects on the list of Kepler objects of interest (KOI) down to 129 KOIs by removing known false positives, candidates with orbits of more than 400 days (where fewer than three transits could be observed) and stars that the SOPHIE instrument found too faint to work with. Installed on the 1.93 meter telescope of the Observatory of Haute-Provence, SOPHIE (Spectrographe pour l’Observation des Phénomènes des Intérieurs stellaires et des Exoplanètes) is capable of measuring radial velocities of 2 meters per second.

With a hard 129 KOIs chosen as its defined sample, the team then went to work on the remnant. These KOIs all showed a transit depth between 0.4% and 3% and a period of up to 400 days. The method was to perform a radial velocity follow-up on these candidates using SOPHIE during six observing seasons. The paper describes the result:

…we found that 45 bona-fide planets (30 already known and 15 new ones characterised by our team), 3 sub-stellar companions that are likely brown dwarfs, 63 multiple stellar systems… out of which 48 are eclipsing binaries and 15 are more complex stellar systems. Finally, for 18 objects, we rejected that they are grazing EBs or brown dwarfs, but we could not establish their planetary nature. For these, we were able to put an upper-limit on their mass.

The false positive rate turns out to be significantly higher than previous values, and the paper argues that the absolute number of false positives is expected to grow as we look at planet candidates with a smaller radius. It’s interesting to see in the results that the occurrence rate of ‘hot Jupiters’ is lower by a factor of 2 compared with other surveys. This lower occurrence rate is not found for gas giants with orbital periods longer than 85 days, leading the authors to speculate that there may be mechanisms of ‘hot Jupiter’ formation specific only to them. 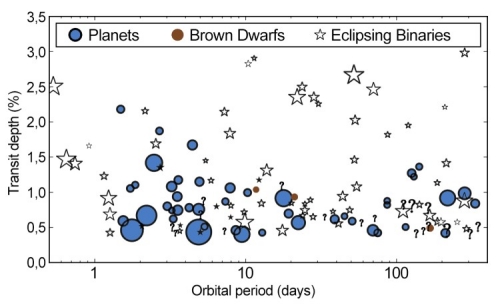 Image: Selected population of planet candidates detected by the Kepler Space Telescope. Their transit depth is displayed here as a function of their orbital period. The size of the marker is relative to the magnitude of the host. Credit: Santerne et al.

We always knew that finding exoplanets, much less characterizing them, was an exceedingly fine-grained task, but these results tell us that even the largest planets, and presumably the easiest to detect, present their own set of problems. The importance of radial velocity follow-ups is clear given the numerous sources of noise in the data. The paper goes on to discuss what may be a connection between the density of moderately irradiated giant planets and the metallicity of their host stars, but the authors say that the correlation needs to be confirmed with more planets in this category.