Where to Look for Rocky Planets

If you were trying to identify the kind of star that should produce Earth-like planets, you’d think the task would be straightforward. Our theories of planet formation focus on a circumstellar disk around a young star out of which planets form, and we’ve already gathered evidence that gas giant worlds are more likely to form around stars that are rich in iron. Since rocky planets are rich in iron and silicon, doesn’t this mean their stars should be rich in metallic elements?

New work out of the Carnegie Institution for Science suggests that the answer is surprisingly complex. As presented by Johanna Teske at the Extreme Solar Systems III meeting in Hawaii, the team’s work has revealed that smaller planets do not require high iron content in their parent stars. In fact, looking at the abundance of 19 different elements in seven stars orbited by at least one rocky planet (these are drawn from the Kepler catalog), the team finds that rocky worlds do not preferentially form around stars rich in metallic elements like iron and silicon.

The data were taken as part of the Kepler Follow-up Observing Program and supplemented by independent observations using the 10-meter Keck telescope and the HIRES echelle spectrometer. From the paper:

The metallicities of the seven stars range from [Fe/H] = −0.30 to +0.15, further demonstrating that small planets form around stars with both low and high metallicities… The abundances of 15 elements are compared to those of a Galactic disk population that includes stars with and without known planets. The abundances of the Kepler planet host stars fall along the Galactic trends, suggesting that stars with small planets have compositions that are typical of the Galactic disk.

Stars with small planets, then, are nothing exceptional in terms of their metallicity. This implies they are common throughout the galaxy. The paper goes on: 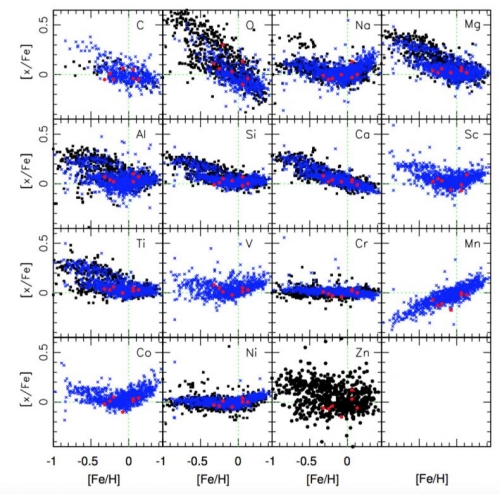 Image: This figure from the paper shows the abundance of different elements in stars versus their abundances of iron. In each square, you can see a plot of the abundance of one element (represented by [x/Fe]) against the abundance of iron (represented by [Fe/H]). Each red dot, black square, or blue X represents a star. The red dots are the small planet-hosting stars studied in this new work. You can see how they do not stand out from the rest of the stars, which were studied in other publications, some of which host planets and some of which have no known planets. The green dashed lines show these values for our Sun. Credit: NASA Ames/JPL-Caltech/Tim Pyle.

Small, rocky planets appear to form around stars with a wide range of elements, whereas gas giants are more likely around stars rich in iron. Teske adds in this Carnegie news release that the results are exciting “…because they mean that small planets are very common and chemically diverse.” What we don’t yet know is whether the planet formation process depletes stars of some of the elements that become concentrated in the planets. None of the seven stars the team studied show a depletion signature, but if subsequent work does uncover such a trend, then looking for stars with specific chemical depletions could be a useful planet-hunting tool.

Does the architecture of a solar system play a role in these trends? With the exception of two planets, the planets of all the stars investigated have semimajor axes smaller than Mercury’s. As the paper notes, the small sample size here limits the statistical significance of the results, so the obvious next step is generating a larger sample of stars with small planets and performing abundance analyses on this set. We’re fortunate that the Kepler mission has identified numerous small planets whose host stars can now be subjected to this kind of study.

The paper is Schuler et al., “Detailed Abundances of Stars with Small Planets Discovered by Kepler I: The First Sample,” accepted for publication in The Astrophysical Journal (preprint).

Next post: ALMA: Interesting Objects in the Outer System