Two papers have appeared on the arXiv server suggesting hitherto undiscovered objects in the outer Solar System (thanks to Centauri Dreams reader Stevo Darkly for the pointer). Both papers use data harvested by the Atacama Large millimeter/submillimeter array (ALMA), an interferometer of radio telescopes in Chile’s northern high desert. Here some 66 12-meter and 7-meter radio telescopes work the sky at millimeter and submillimeter wavelengths, with targets that have ranged from galactic dust in the early universe to magnetic fields near a supermassive black hole.

ALMA’s uses closer to home are made clear in the new papers, which demonstrate that this array can be a major tool in helping us probe the outer system well into the Oort Cloud. In the first paper, the researchers draw on three periods of observation with ALMA to detect point-like emissions at different positions in two of the periods. The two emissions are thought to be the same source, considering what the authors call “the negligible probability of having identified two independent highly variable background sources.” Assuming a single source, the team dubs the object Gna, noting that it was not visible in the third observing period 42 days later.

So what exactly do we have here? If gravitationally bound, the object would be at a distance between 12 and 25 AU, most likely a Centaur with a semi-major axis between Jupiter and Neptune, though a large one, in the range of 220-800 kilometers depending on distance and albedo. The authors note that the location of the field of view (close to the galactic plane toward the star W Aquilae) may explain why the object was not seen sooner despite its size.

But there is another possibility, that Gna is unbound. “In that case,” write the authors, “the most exciting possibility is that we have observed a planetary body or brown dwarf in the outer reaches of the Oort cloud.” Which leads to recent WISE studies that found no evidence of a Saturn-class object out as far as 28000 AU, or of a Jupiter out to 82000 AU, while a Jupiter-sized brown dwarf could be excluded out to 26000 AU at the locations previously suggested by John Matese and Daniel Whitmire. The latter have argued that a large planetary body in the Oort would explain the seemingly clustered orbits of many comets.

Could Gna be that object? The paper notes the WISE data in reference to the new findings, stating that a submillimeter flux of 3 mJy at a distance of 5000-50000 AU would point to an object that has retained residual heat or generates emission of its own. It would not, in other words, absorb enough sunlight to display the measured flux. As the paper notes:

This would imply a large planet or brown dwarf and could be reconciled with the Jupiter sized brown dwarf or Saturn/Neptune size planetary limits provided by WISE (Luhman 2014), if Gna is located around or beyond ∼ 20000 AU.

But the high proper motion seen here seems to rule out anything beyond about 4000 AU. While unable to exclude a large gravitationally unbound body within 4000 AU, the authors think it most likely that Gna is a bound Centaur in retrograde orbit, currently between 12 and 25 AU out and with a size of 220-880 kilometers.

But we’re not through with ALMA just yet. Another set of ALMA observations ten months apart (2014-2015) by the same research team has revealed a point source that appears to share the proper motion of Alpha Centauri A and B. Is there an Alpha Centauri D? Apparently not, for at the distance of the Centauri stars, the measurements would correspond to an M2-class dwarf, a star bright enough to be clearly visible. If there were an Alpha Centauri D, we would have seen it by now.

Instead, the authors make the case that the object is a Trans Neptunian Object (TNO). From the paper:

For reasons of sensitivity (or rather, lack thereof), TNOs on highly eccentric orbits have traditionally been firstly detected when close to their perihelia. Further away, there would have remained unseen… However, a sizable population of such bodies is expected to exist at large distances from the Sun. It is clear, therefore, that ALMA with its high submm sensitivity provides presently the only existing means to detect TNOs far from their perihelia, where temperatures are merely some tens of Kelvin. There must be a vast reservoir of objects between, say, roughly 100 and 1000 AU, of which we hitherto have seen only a tiny fraction. 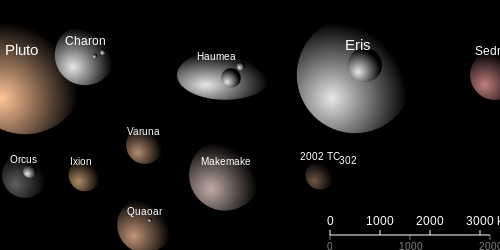 Image: An illustration of the relative sizes, albedos and colors of some of the largest known TNOs. Credit: Wikimedia Commons. Licensed under CC BY-SA 3.0.

Just what kind of an object would this be? The paper continues:

We argue that the object is most likely part of the solar system, in prograde motion, albeit at a distance too far to be detectable at other wavelengths, viz. an ETNO [Extreme Trans Neptunian Object] (≫ 100 AU), a hypothesized Super-Earth (∼ 300 AU) or a super-cool brown dwarf (∼ 20 000 AU).

From an ETNO to a brown dwarf is quite a range, highlighting how much we still don’t know. So we can’t say we’ve found the large perturber discussed by Matese and Whitmire, but we do have interesting work on new objects, one of which could conceivably fit the description. It will take a lot of work to learn more about the new ALMA objects, but we’re finding out how the array can fine-tune our capabilities in probing out into the Oort Cloud. If such perturbers exist, we’re going to turn them up sooner or later as we continue to map the system’s farthest depths.

The paper on Gna is Vlemmings et al., “The serendipitous discovery of a possible new solar system object with ALMA,” submitted to Astronomy & Astrophysics (preprint). The paper on the point source near Alpha Centauri in the sky is Liseau et al., “A new submm source within a few arcseconds of α Centauri: ALMA discovers the most distant object of the solar system,” submitted to Astronomy & Astrophysics (preprint). Eric Berger offers a highly skeptical take on this work here.