Catching Up with Dawn at Ceres

The Dawn spacecraft has reached its final orbital altitude, closing to within 385 kilometers of the asteroid (and yes, I really should start calling Ceres a ‘dwarf planet’ consistently — working on it). We have no observations from this distance yet, but that process begins within days, and should give us images with a resolution of 35 meters per pixel, along with a wealth of data from the craft’s scientific package.

Like New Horizons, Dawn makes history every time it returns observations of places we haven’t seen before, or surface features we’re seeing at higher resolution as the orbit lowers. Unlike New Horizons, Dawn is an orbiter, which makes me long for the idea of a Pluto orbiter, even though New Horizons has amply demonstrated how useful and powerful a flyby mission can be. An orbiter lets you complete the mapping process so essential to making a new world tangible, while there are parts of Pluto that our flyby couldn’t make out at highest resolution.

I found the temperatures Dawn recorded at Ceres a bit startling. The 180 K (-93 °C) on the low side seems about right, but I hadn’t expected equatorial temperatures to reach as high as 240 K (-33 °C), which is a temperature I can recall experiencing several times in Iowa during an unusually tough winter. This JPL news release notes that temperatures at and near Ceres’ equator are too high to support surface ice for long periods, as explained in new work published in Nature to which we now turn.

Maria Cristina De Sanctis (National Institute of Astrophysics, Rome) and colleagues tell us in one of the two new papers that Dawn has turned up evidence for clays that are rich in ammonia on Ceres, using data gathered by the spacecraft’s visible and infrared mapping spectrometer. I hearken back to those temperatures because Ceres is too warm to support surface ammonia ice, but ammoniated compounds (ammonia molecules combining with other minerals) could be stable. Finding these tells us that Ceres may not have formed in the main asteroid belt.

“The presence of ammonia-bearing species suggests that Ceres is composed of material accreted in an environment where ammonia and nitrogen were abundant,” says De Sanctis. “Consequently, we think that this material originated in the outer cold solar system.”

The other possibility: The dwarf planet formed about where it is today but drew in materials from the outer system that had formed near the orbit of Neptune. Another interesting finding: Although carbonaceous chondrites (meteorites rich in carbon) are thought to be similar to Ceres in composition, the data do not match at all wavelengths. Ceres shows absorption bands in its reflected light that match up with the ammoniated minerals described above. Moreover, Ceres shows water content as high as 30 percent, while carbonaceous chondrites normally weigh in at 15 to 20 percent bulk water content, possibly indicating accretion from volatile-rich material.

Image: Dwarf planet Ceres is shown in these false-color renderings, which highlight differences in surface materials. Images from NASA’s Dawn spacecraft were used to create a movie of Ceres rotating, followed by a flyover view of Occator Crater, home of Ceres’ brightest area. Credit: NASA/JPL-Caltech/UCLA/MPS/DLR/IDA.

While we began seeing a small number of unusual bright spots on Ceres as Dawn approached, it turns out that close study reveals more than 130 areas of unusual brightness, most of them associated with impact craters. The second paper in Nature is the work of Andreas Nathues (Max Planck Institute for Solar System Research, Göttingen) and colleagues. Here we learn that the bright material is consistent with hexahydrite, which is a type of magnesium sulfate. What the paper argues is that the bright spots are areas rich in salt that were left behind when water ice sublimated long ago, having been brought to the surface by an impact. 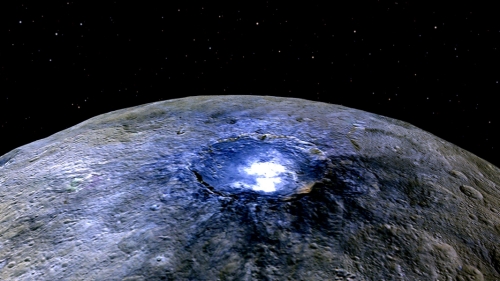 Image: This representation of Ceres’ Occator Crater in false colors shows differences in the surface composition. Red corresponds to a wavelength range around 0.97 micrometers (near infrared), green to a wavelength range around 0.75 micrometers (red, visible light) and blue to a wavelength range of around 0.44 micrometers (blue, visible light). Occator measures about 90 kilometers wide. Scientists use false color to examine differences in surface materials. The color blue on Ceres is generally associated with bright material, found in more than 130 locations, and seems to be consistent with salts, such as sulfates. It is likely that silicate materials are also present. Credit: NASA/JPL-Caltech/UCLA/MPS/DLR/IDA.

That, of course, backs up the idea that we’re dealing with a subsurface layer of salty water ice, an idea supported by the global nature of the bright spots. The Occator crater contains the brightest material found on Ceres, and it also appears to be one of the youngest surface features, with an age of about 78 million years. Remarkably, what appears to be a diffuse haze can be seen filling the floor of the crater at certain times of day.

The haze appears to be absent at dawn and dusk, while it can be seen at local noon, making Ceres, in the view of the study authors, something like a comet, where water vapor when warmed can lift particles of dust and residual ice off the surface. The Herschel space observatory reported water vapor at Ceres in 2014, a finding consistent with these observations. Remember, however, that we’re still waiting on the unambiguous detection of water ice on Ceres, so the story of the Occator haze will require more data and further analysis.

Next post: SETI: Project Argus and the Long Stare