Planets that transit across their star as seen from Earth allow us to use transmission spectroscopy to study their atmospheres. The idea is straightforward: Even though we can’t see the planet at optical wavelengths, we can examine the starlight that travels through its outer atmosphere during the transit. Each atmosphere leaves its own signature, and the atmospheres of some of the ‘hot Jupiters’ thus far studied have raised questions. Why do some of these worlds have less water than our models of their atmospheres would predict? Is this an indication that such planets formed in protoplanetary disks that were depleted of water?

A new study brings us some answers by going to work on eight hot Jupiters (WASP-6b, WASP-12b, WASP-17b, WASP-19b, WASP-31b, WASP-39b, HAT-P-1b and HAT-P-12b) using the Hubble Space Telescope. The worlds chosen here offer a wide range of temperature, surface gravity, mass and radii. All eight were observed at optical wavelengths using Hubble’s Space Telescope Imaging Spectrograph (STIS) instrument, while two of them (WASP-31b and HAT-P-1b) were also observed in the near infrared with Hubble’s Wide Field Camera 3.

But lead author David Sing (University of Exeter) and team did not stop there. The Hubble survey was bolstered by infrared data from the Spitzer Space Telescope, and the work folded in data from both HST and Spitzer on two of the most widely studied hot Jupiters, HD 209458b and HD 189733b. Although we’re only dealing with ten worlds, this turns out to be the largest spectroscopic catalog of exoplanet atmospheres yet assembled.

What we learn is that these planets show a continuum from completely clear to cloudy atmospheres. It turns out that the difference between a planet’s radius as measured at optical and infrared wavelengths allows us to distinguish between the two types. A cloudy planet shows up larger in visible light than it does in the infrared — at the latter wavelengths, we are looking deeper into the atmosphere. The paper notes the significance of this finding:

We find that the difference between the planetary radius measured at optical and infrared wavelengths is an effective metric for distinguishing different atmosphere types. The difference correlates with the spectral strength of water, so that strong water absorption lines are seen in clear-atmosphere planets and the weakest features are associated with clouds and hazes. This result strongly suggests that primordial water depletion during formation is unlikely and that clouds and hazes are the cause of weaker spectral signatures.

In other words, the clouds are the culprit, and ‘dry’ hot Jupiters are not depleted in water. 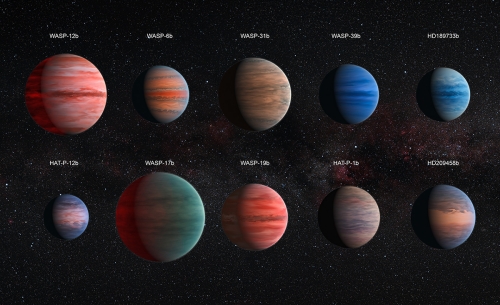 A couple of things to note in the image. The colors are vivid but as this Hubblesite news release explains, they are purely for illustrative purposes. We have little data on the color of any of these worlds with the exception of HD 189733b, sometimes called the ‘blue planet.’ The cloud patterns shown here are also theoretical, based largely on what we see on Jupiter.

An interesting difference between hot Jupiters and brown dwarfs emerges in this paper. With the latter, which can have temperatures similar to hot Jupiters, we can go from warmer, cloudy L-class dwarfs to cooler T-dwarfs whose atmospheres are inferred to be clear — the paper calls this sequence ‘well defined.’ In contrast, hot Jupiters do not show a strong relationship between temperature and cloud formation, at least based on this sample, where both cloudy and not cloudy planets appear throughout the temperature range studied. The authors speculate on the difference:

We suggest that the difference between hot Jupiters and brown dwarfs is due to the vertical temperature structure of hot-Jupiter atmospheres. Hot Jupiters have very much steeper pressure–temperature profiles compared to isolated brown dwarfs, owing to the strong incident stellar flux heating the top of the planetary atmosphere… Since cloud condensation curves run nearly parallel to hot-Jupiter profiles, a relatively small temperature shift (about 100K) could easily move a cloud base by a factor of tens or hundreds in pressure, in or out of the visible atmosphere.

Moreover, some hot Jupiters are likely to have cloud materials that are cold-trapped deep within the atmosphere, and thus out of the range we can detect. The paper adds that hot Jupiters show a wider range of gravities and metallicities than brown dwarfs, factors that play a role in atmospheric circulation and condensation as well as temperature. As we learn more about how to distinguish between clear and cloudy atmospheres, we’ll strengthen our ability to focus on worlds with clear skies whose chemical abundances can be studied in greater detail.