E-22: The Last Hurrah at Enceladus

It’s the end of an era. On Saturday December 19, the Cassini Saturn orbiter will make its final close pass by Enceladus. This doesn’t mark the end of Cassini itself, which still has work to do especially with regard to Titan, but it does mean the end, at least for now, of our close-up study of a remarkable phenomenon: The plumes of Enceladus, which Cassini itself discovered. We’ve gained priceless data through its flybys, helping us make the case for an internal ocean.

Cassini will continue to observe Enceladus until mission’s end, but only from much greater distances. In fact, as this JPL news release explains, the closest Cassini will come to Enceladus after Saturday is about four times the distance of the upcoming flyby. Nor will the Saturday event be as close a pass as Cassini’s dive through the south polar plume on October 28. That one took the spacecraft within a scant 49 kilometers of the surface, returning data that is still undergoing analysis as we probe the plume’s activity. A key issue: Is there hydrogen gas here, which would offer yet more evidence for active hydrothermal systems on the seafloor?

The Saturday event will be all about measuring the moon’s heat, a critical factor in making sense of the factors driving the spray of particles and gas from the ocean beneath. 5000 kilometers turns out to be about the right distance to allow the best working of Cassini’s Composite Infrared Spectrometer (CIRS) as it maps the heat flow across the southern polar region, according to Mike Flasar, CIRS team lead at NASA GSFC:

“The distance of this flyby is in the sweet spot for us to map the heat coming from within Enceladus — not too close, and not too far away. It allows us to map a good portion of the intriguing south polar region at good resolution.” 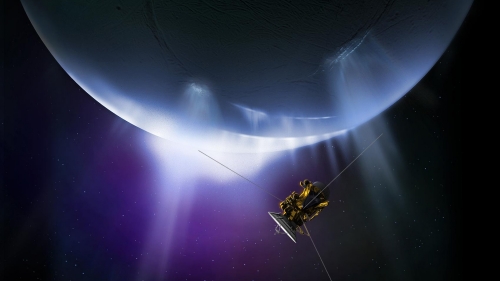 Image: An exciting chapter of space exploration history will come to a close as NASA’s Cassini spacecraft makes its final close flyby of Saturn’s active, ocean-bearing moon Enceladus. The spacecraft is scheduled to fly past the icy moon at a distance of 4,999 kilometers on Dec. 19 at 0949 PST (1749 UTC). Although Cassini will continue to observe Enceladus for the remainder of its mission (through Sept. 2017), its next-closest encounter with the moon will be at a distance more than four times farther away. The focus of the Dec. 19 encounter will be on measuring how much heat is coming through the ice from the moon’s interior — an important consideration for understanding what is driving its surprising geyser activity, which Cassini discovered in 2005. Credit: NASA/JPL-CalTech.

Keep in mind that the south polar region of Enceladus was well lit when Cassini arrived at Saturn in 2004, but at present the area is in winter darkness, making these heat studies that much easier to complete absent the heat of the Sun. By mission’s end, we will have data on six years of winter darkness in the south polar area. The discovery of geologic activity caused the mission’s flight plan to be changed to make Enceladus a prime target of operations. Of all the gifts Cassini has given us, finding a global ocean beneath the ice glitters the most brightly.