Where Are the Jupiter Analogs?

Are Solar Systems like ours commonplace? One way of answering this is to look at the role of planets like Jupiter, which may have helped to determine the habitability of the inner planets. But worlds like Jupiter in orbits around 5 AU do not appear to be the norm, as Andrew LePage points out in this discussion of a new exoplanet find. LePage, publisher of an essential site on exoplanet detection (www.DrewExMachina.com) is also a Senior Project Scientist at Visidyne, Inc. in Boston. Today he shows us what we know and just how much we still need to clarify about the occurence of planets like Jupiter and their role in system habitability. 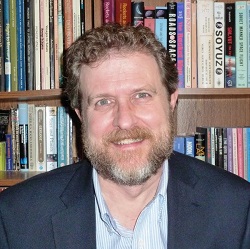 A couple of decades ago, astronomers thought they had planetary systems figured out: they consisted of a more or less orderly set of worlds orbiting in the same plane with small rocky worlds close in and much larger, volatile-rich planets orbiting farther out beyond the “snow line” where plentiful water freezes into solid ice. Along with this model came the view among some that the presence of large Jupiter-like planets was not only likely but required to deliver water and clear out potential impact hazards to ensure the habitability of smaller rocky worlds orbiting inside a star’s habitable zone. Coupled with the Copernican principle that implies that there is nothing special about our Solar System, it was expected that extrasolar planetary systems would have similar architectures and possess “Jupiter analogs”.

But with the discovery of the first extrasolar planet orbiting a main sequence star back in 1995, this orderly view of planetary systems was called into question. This first exoplanet, 51 Pegasi b, was a Jupiter-mass world in a four-day orbit only 8 million kilometers from its sun. This “hot Jupiter” and a host of other extrasolar giant planets (EGPs) discovered since with a wide range of orbital radii clearly demonstrated that other arrangements of planetary systems are possible and that Jupiter analogs might not be the norm after all. Unfortunately, getting a clear picture of exoplanetary systems has been difficult because of the detection biases of the most often used detection techniques (i.e. precision radial velocity measurements and transit observations) clearly favor finding large planets in small orbits with short periods. But with two (and sometimes more) decades of data from various long-running radial velocity surveys now available for analysis, this is beginning to change as it now becomes possible to detect EGPs with orbital periods of a decade or more.

Earlier this month, the team responsible for Lick-Carnegie Exoplanet Survey announced the latest discovery of a Jupiter analog in a paper accepted for publication in The Astrophysical Journal. What makes this discovery all the more interesting is that the lead author, Dominick Rowan, is a senior at Byram Hills High School in Armonk, New York. Rowan recently won individual top honors in the Regional Finals of the Siemens Competition in Math, Science & Technology as a result of his work described in this paper. The newest Jupiter analog found by Rowan et al. orbits the Sun-like star HD 32963 about 120 light years away. With a mass estimated to be 94% that of the Sun, this star has a luminosity of about 90% of the Sun’s and an estimated age of around five billion years.

To find the new Jupiter analog, designated HD 32963b, a total of 199 radial velocity measurements acquired over 16 years using HIRES (High Resolution Echelle Spectrometer) on the 10-meter Keck I telescope at Mauna Kea, Hawaii were analyzed. These data were placed into two-hour bins to create 109 individual radial velocity measurements with a typical uncertainty of ±1.2 meters/second. A clear signal with a semiamplitude of 11 meters/second and a period of 6.49 years was seen in the data with only a 2×10-5 false alarm probability. This signal indicates the presence of a planet in a nearly circular 3.4 AU orbit – only a touch smaller than Jupiter’s 5.2 AU orbit around the Sun. Since the tilt of the new planet’s orbit with respect to the plane of the sky is not known, only the minimum mass or Mpsini of 0.70 times that of Jupiter (or MJ) can be determined using radial velocity measurements alone. By assuming a randomly oriented orbit, there is less than a one in three chance that HD 32963b is more massive than Jupiter.

Rowan et al. took their analysis one step further and examined the data from the Lick-Carnegie Exoplanet Survey to determine the occurrence rate of Jupiter analogs around Sun-like stars. For the purpose of this analysis, a Jupiter analog was defined as an EGP with a mass in the 0.3 to 3 MJ range orbiting a Sun-like star with an eccentricity less than 0.3 and a period of between 5 to 15 years (which corresponds roughly to orbital radii in the 3 to 6 AU range). The new find by Rowan et al. qualifies as a Jupiter analog by this definition. 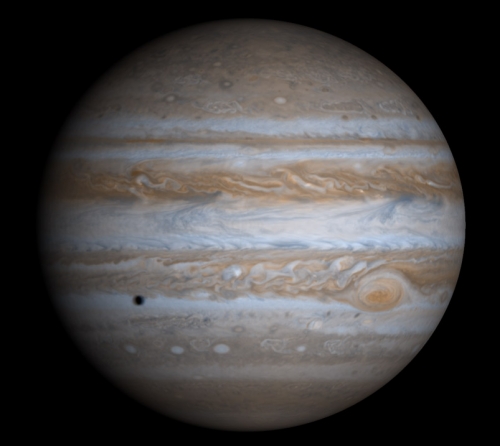 Image: Jupiter dominates our Solar System and may have had a role to play in the habitability of our own planet. We’re only now learning, however, how common such worlds are in orbits comparable to our own Jupiter’s at 5 AU. Credit: NASA/JPL/University of Arizona.

A review of the Exoplanet Data Explorer in August 2015 revealed 21 EGPs that met the working definition for Jupiter analog. Of these, eight published exoplanets that met the baseline requirements were found among the 1,120 Sun-like stars in the Lick-Carnegie Exoplanet Survey, yielding a raw frequency rate of 0.71%. In order to turn this raw number into a meaningful occurrence rate, the detection efficiency of the radial velocity survey for this class of planet must be taken into account. To accomplish that, Rowan et al. created synthetic radial velocity data sets for each star in their survey representing 320,000 different combinations of various planetary mass and orbital parameters. The ability of their analysis algorithms to detect these velocity variations through the noise in the data was then gauged to determine the detection efficiency.

The analysis by Rowan et al. found that the occurrence rate of Jupiter analogs orbiting Sun-like stars as defined here was approximately 3%. Making reasonable assumptions about the possible distribution of EGP properties, the rate can not be less than about 1% nor greater than around 4%. These results roughly agree with earlier studies based on microlensing and long-term radial velocity surveys. This suggests, contrary to earlier expectations, that Jupiter analogs are not common. This finding implies that either planet migration mechanisms from the snow line are very efficient at moving EGPs into smaller orbits or that EGPs have a difficult time forming at distances of about 5 AU.

But before the alarms are sounded by “rare Earth” advocates about the relative rarity of Jupiter analogs, it remains to be seen just how vital Jupiter analogs are to planetary habitability given the spectrum of architectures observed in exoplanet surveys to date. Even if Jupiter analogs prove to be required, current surveys have yet to search effectively for smaller Neptune to Saturn-size worlds at distances of about 5 AU or for EGPs at greater distances which may suffice as “Jupiter surrogates”. Only continued collection of radial velocity data along with new surveys, such as the current Gaia astrometry mission and the new generation of telescopes to image exoplanets directly, will allow us to fill in the missing pieces of our knowledge of exoplanetary systems. Thankfully this ongoing search provides opportunities for aspiring young scientists like Dominick Rowan.