At no more than 14 light years away, Wolf 1061 gains our attention with the discovery that this small red dwarf hosts three planets, in orbits of 4.9, 17.9 and 67.2 days respectively. Of particular interest is Wolf 1061c, which appears to be within the habitable zone, defined here as the region in which it would be possible for liquid water to exist on the surface, and potentially life. Wolf 1061c has a mass at least 4.3 times that of Earth, with inner planet Wolf 1061b coming in at 1.4 times that mass. Wolf 1061d is calculated to be at least 5.2 times Earth’s mass.

One thing Wolf 1061 reminds us is that red dwarf stars are good targets for radial velocity studies. For one thing, such stars have low levels of luminosity, which means their habitable zones are small and planets within them are in close orbits. Such planets create a stronger, more detectable signature for instruments using Doppler methods, a fact that is intensified by the typically low mass of the star. The paper on this work adds that M-dwarfs also show sharp molecular absorption features and typically have slow rotation speeds.

The current work, led by Duncan Wright at the University of New South Wales, is based on data from the HARPS spectrograph (High Accuracy Radial Velocity Planet Searcher) installed on the European Southern Observatory’s 3.6m telescope at La Silla. Long-term monitoring data on more than a hundred M-dwarfs is found within the HARPS database. 148 HARPS spectra for Wolf 1061 are available here, taken over a period of 10.3 years. Wright and team have found a more precise way to extract Doppler signals from the HARPS data reduction software (DRS) by creating a custom mask generated from within the data for the star.

The template is, in other words, custom-built for the particular star under study, with details supplied in the paper. For our purposes, the results for the two outer planets stand out. From the paper:

The 17.867 d planet is of particular interest because it is of sufficiently small mass to be rocky and is in the habitable zone of the host M dwarf star. The probable outer planet at 67.274 d resides just on the outer boundary of the habitable zone and is also likely rocky. These planets join the small but growing ranks of potentially habitable rocky worlds orbiting nearby M dwarf stars. 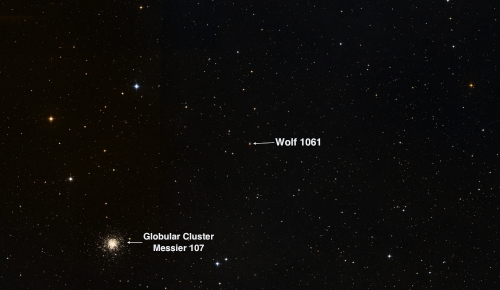 Image: The sky area in the constellation of Ophiucus near the red dwarf star Wolf 1061 which includes the impressive, but unrelated, star cluster Messier 107. Wolf 1061 is 14 light years away. Credit: The “Aladin sky atlas” developed at CDS, Strasbourg Observatory, France.

But we may be able to deploy other tools besides radial velocity, for the paper argues that the strong Doppler signals may be supplemented by transits, considering how short the orbital periods of these planets are. The transit probabilities are listed as 14 percent for planet b, 5.9 percent for planet c, and 2.6 percent for planet d. These would be transits that are detectable from ground-based telescopes given the transit depths the authors estimate, which would make Wolf 1061 an excellent target for projects like MEarth (a robotic observatory on Mt. Hopkins, AZ) and MINERVA (MINiature Exoplanet Radial Velocity Array, also on Mt. Hopkins).

The paper is Wright et al., “Three planets orbiting Wolf 1061,” to be published by The Astrophysical Journal Letters (preprint).