‘A City Near Centaurus’

Let’s start the year off with a reflection on things past. Specifically, a story called “A City Near Centaurus,” set on a planet circling one of the Alpha Centauri stars. Just which star is problematic, because our author, Bill Doede, describes it as a planet circling ‘Alpha Centaurus II.’ I’m sure he means Centauri B, but the story, which appeared in Galaxy at the end of Frederick Pohl’s first year as editor, is less concerned about nomenclature and setting than the conflict between a humanoid alien called Maota and the timeless city he lives in.

Michaelson, our human protagonist, looks out upon this long deserted metropolis:

He gazed out from his position at the complex variety of buildings before him. Some were small, obviously homes. Others were huge with tall, frail spires standing against the pale blue sky. Square buildings, ellipsoid, spheroid. Beautiful, dream-stuff bridges connected tall, conical towers, bridges that still swung in the wind after half a million years. Late afternoon sunlight shone against ebony surfaces. The sands of many centuries had blown down the wide streets and filled the doorways. Desert plants grew from roofs of smaller buildings. 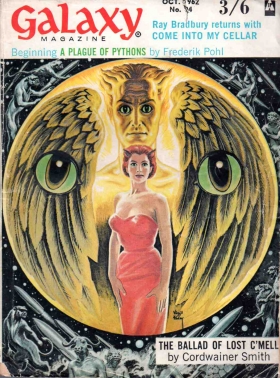 Maota is a humanoid who, fortunately for the reader and Michaelson, speaks English, evidently one of the few who remain half a million years after whatever has caused the disappearance of a once great civilization. If anything, this should remind you of Bradbury’s The Martian Chronicles, whose ancient cities shaped many a young imagination, but Doede’s story likewise has a bit of J. G. Ballard in it, this at a time when Ballard was being introduced to America by Cele Goldsmith, the brilliant editor of Amazing Stories and Fantastic. The early 1960s were truly fecund years for science fiction.

Disturbing a Living Past

I introduce Doede’s story today as a bit of a jeu d’espirit, but also out of genuine curiosity. I had thought I had read every story or novel dealing with the Centauri stars at one point or another. And indeed, I know for a fact that I read the October 1962 issue of Galaxy, for reasons I’ll explain in a moment. But when I stumbled across “A City Near Centaurus” over the weekend, it was by way of a chance encounter on Project Gutenberg, where the tale, its copyright never renewed, is now available. I therefore read it with fresh eyes.

We’re asked to swallow a lot if we’re dealing with humanoids on an alien world, although bear with the tale. To my mind, it’s spritely done and could easily be imagined as a TV script for Rod Serling’s Twilight Zone, a tale plucking at a kind of moral lesion in what it means to explore and encounter not just the alien but the past. Maota wants Michaelson to leave the city alone, fearing his amateur archeology will disrupt the spirits of the dead.

“What difference does it make?” Maota cried, suddenly angry. “You want to close up all these things in boxes for a posterity who may have no slightest feeling or appreciation. I want to leave the city as it is, for spirits whose existence I cannot prove.”

For his part, Michaelson is as clumsy as Schliemann at Troy, but he wants to know what made this culture tick. The tension is heightened by the fact that these two are alone in the deserted city.

Along the way we encounter an ancient book that seems to communicate telepathically. We also learn that Michaelson possesses a technology that allows teleportation, in the form of a small implant behind his ear that lets him be more or less wherever he chooses to be. Inevitably, although Maota is old, he and Michaelson fight both verbally and physically, and the book is destroyed. The old man then reveals what happened to the civilization once here:

Maota smiled a toothless, superior smile. “What do you suppose happened to this race?”

“They took the unknown direction. The books speak of it. I don’t know how the instrument works, but one thing is certain. The race did not die out, as a species becomes extinct.”

“I don’t know. I only know that with this instrument there is no death. I have read the books that speak of this race, this wonderful people who conquered all disease, who explored all the mysteries of science, who devised this machine to cheat death. See this button here on the face of the instrument? Press the button, and….”

“I don’t know, exactly. But I have lived many years. I have walked the streets of this city and wondered, and wanted to press the button. Now I will do so.”

It would be churlish to give away what happens next, but it’s clear that the city lives, and that the tension between inevitable change and the urge to preserve what has been infuses even our encounter with beings from another star. Reading “A City Near Centaurus,” I became intrigued enough to look for information on Bill Doede. Biographical data didn’t emerge, though the The Internet Speculative Fiction Database did reveal that he published four other tales between 1960 and 1964, all in Galaxy save one for Fred Pohl’s fledgling Worlds of Tomorrow in early 1964. Clearly, he was an H. L. Gold discovery who managed a working relationship with Pohl after the editorial handoff of Galaxy in 1961.

Riffing on the Future

Some of us keep old magazines and collect others because the pleasures of science fiction from this era were so intense, and in any case, we all gravitate to the better memories of our childhood. I mentioned that I was sure I had read the issue of Galaxy that “A City Near Centaurus” appeared in, and that’s because the lead story in the issue was Cordwainer Smith’s “The Ballad of Lost C’Mell.” I envy those who haven’t made an acquaintance with Smith’s work — he was actually a well-traveled diplomat (and sometime spy) named Paul Linebarger, who led a life fully as interesting as some of his astonishing fiction. 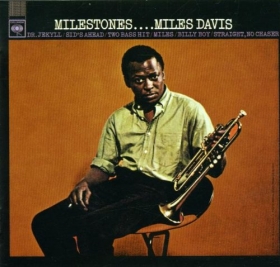 I remember where I was when I read most of Cordwainer Smith’s fiction for the first time, and though I don’t remember Bill Doede, I’m pleased to have recovered another story dealing in some way with our nearest stars. On a broader note, I was thinking this weekend, as I listened to a Bobby Hutcherson album while reading Doede, that jazz and science fiction have much in common. Whether keying off chord changes or moving in a modal direction (as in Miles Davis’ wonderful work from the same era as the Doede story), jazz gives musicians ways to explore sound, with no two performances representing the same idea. Listen to Davis, for example, doing the classic “Milestones” on the album of the same name and then compare the performance with his take on the same piece on Miles Davis In Europe.

It’s the same composition, but taken in entirely different directions — the accelerated tempo of the latter, recorded at the Antibes Jazz Festival, pushes the piece to its limits. Like jazz, science fiction shapes its materials — elements of emerging science — and plays speculative changes with and against them. We invent a future and explore it, tweak it and explore it again, a riffing of ideas that helps us see possible directions for our species. As we begin 2016, I ask myself what changes we’ll play off in the coming year, secure in the knowledge that there is no terminus. In some ways we are always, as David Deutsch would say, at the beginning of infinity.

Addendum: Jon Lomberg passed along the beautiful artwork below, his visualization of Earthport, from Cordwainer Smith’s “Ballad of Lost C’Mell,” by way of letting me know he’s also a great fan of the author’s work. Jon also sent a scrupulously detailed chart of Smith’s fictional universe that I couldn’t get to display well due to the limitations of the format here, but have a look at Earthport. Jon’s art can be viewed in considerably more detail at http://www.jonlomberg.com/. 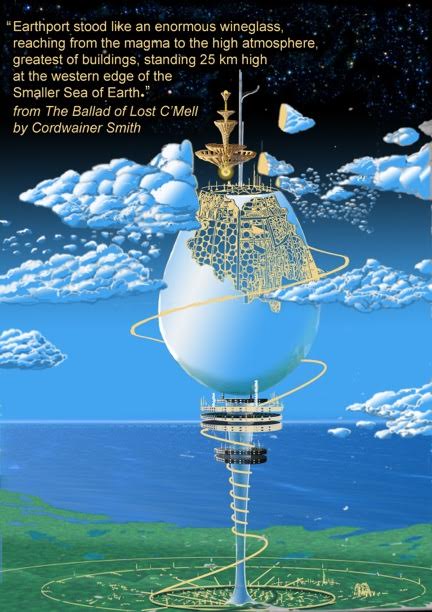