If they did nothing else for us, space missions might be worth the cost purely for their role in tuning up human ingenuity. Think of rescues like Galileo, where the Jupiter-bound mission lost the use of its high-gain antenna and experienced numerous data recorder issues, yet still managed to return priceless data. Mariner 10 overcame gyroscope problems by using its solar panels for attitude control, as controllers tapped into the momentum imparted by sunlight.

Overcoming obstacles is part of the game, and teasing out additional science through extended missions taps into the same creativity. Now we have news of how successful yet another mission re-purposing has been through results obtained from K2, the Kepler ‘Second Light’ mission that grew out of problems with the critical reaction wheels aboard the spacecraft. It was in November of 2013 that K2 was proposed, with NASA approval in May of the following year.

Kepler needed its reaction wheels to hold it steady, but like Mariner 10, the wounded craft had a useful resource, the light from the Sun. Proper positioning using photon momentum can play against the balance created by the spacecraft’s remaining reaction wheels. As K2, the spacecraft has to switch its field of view every 80 days, but these methods along with refinements to the onboard software have brought new life to the mission. K2, we quickly learned, was still in the exoplanet game, detecting a super-Earth candidate (HIP 116454b) in late 2014 in engineering data that had been taken as part of the run-up to full observations. 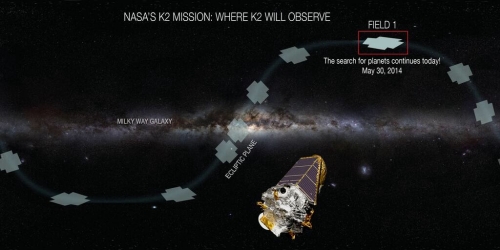 Image: NASA’s K2 mission uses the Kepler exoplanet-hunter telescope and reorients it so that it points along the Solar System’s plane. This mission has quickly proven itself with a series of exoplanet finds. Credit: NASA.

Now we learn that K2 has, in its first year of observing, identified more than 100 confirmed exoplanets, including 28 systems with at least two planets and 14 with at least three — the spacecraft has also identified more than 200 unconfirmed candidate planets. Some of the multi-planet systems are described in a new paper from Evan Sinukoff (University of Hawaii at Manoa). Drawn from Campaigns 1 and 2 of the K2 mission, the paper offers a catalog of ten multi-planet systems comprised of 24 planets. Six of these systems have two known planets and four have three known planets, the majority of them being smaller than Neptune.

In general, the K2 planets orbit hotter stars than earlier Kepler discoveries. These are also stars that are closer to Earth than the original Kepler field, making K2 exoplanets useful for study in the near future through missions like the James Webb Space Telescope. From the Sinukoff paper:

As this article in Nature points out, K2 has already had quite a run. Among its highlights: A system of three super-Earths orbiting a single star (EPIC 201367065, 150 light years out in the constellation Leo) and the discovery of the disintegrating remnants of a planetary system around a white dwarf (WD 1145+017, 570 light years away in Virgo).

Coming up in the spring, K2 begins a three-month period in which it segues from using the transit method to gravitational microlensing, in which the presence of a planet is flagged by the brightening of more distant cosmic objects as star and planet move in front of them. We’ll keep a close eye on this effort, which will be coordinated with other telescopes on the ground. The K2 team believes the campaign will identify between 85 and 120 planets in its short run.

Previous post: Space Habitats Beyond LEO: A Short Step Towards the Stars