Knowing that the data from New Horizons continues to arrive gives me a warm feeling about the months ahead. Below we have the highest resolution color image of one of the two potential cryovolcanoes found on the surface during the Pluto flyby last summer. This is Wright Mons, some 150 kilometers across and 4 kilometers high. If this is indeed a volcano, none has been discovered in the outer system that can compare with it in size. 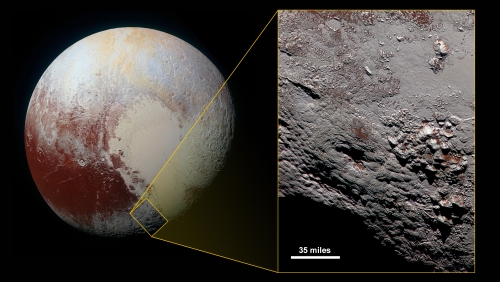 The image is a composite drawn from New Horizons’ Long Range Reconnaissance Imager (LORRI) on July 14, 2015. The range is approximately 48,000 kilometers, giving us features down to 450 meters across. JHU/APL has also incorporated color data from the Ralph/Multispectral Visible Imaging Camera (MVIC) taken about 20 minutes after the LORRI images were taken, from a range of 34,000 kilometers, and with a resolution of 650 meters per pixel. The scene on the right is 230 kilometers across.

The question most directly raised by the image is the nature of the sparse red material — why is it where it is and why is it not more widespread? You can also see that this must be a relatively young surface, to judge from the fact that there is only one clear impact crater on Wright Mons. This JHU/APL news release speculates that the young surface is an indication that Wright Mons was active relatively late in Pluto’s history.

So hard to believe it’s been ten years since launch…

10 years ago @NewHorizons2015 had raced past the moon's orbit on its way to Pluto. https://t.co/PgnWuLQfkx #OTD pic.twitter.com/ii7BPxOqtO

In 2006, just before the launch, David Grinspoon wrote this in the Los Angeles Times:

Theory alone cannot teach us what there is to know. The universe is stranger and more varied than we can predict or calculate, and that is why we explore. We can’t know exactly what New Horizons will find. But we can safely predict that when we get to Pluto — and the whole new class of worlds it represents — what we discover will baffle, surprise, delight and enlighten.

Pluto As We Used to See It

If you think back to what we knew about Pluto when we could only see it from Earth orbit, it’s heartening to see how much we surmised. As Amanda Zangari (SwRI, and a member of the New Horizons’ Geology, Geophysics and Imaging Team) mentions in a recent blog post, we knew that the surface was covered with nitrogen and methane, and also that tholins were common (Zangari calls them the ‘brown gunk made when UV light hits nitrogen and methane’). And the carbon monoxide patch we saw where Pluto was brightest turned out to be Sputnik Planum, the area forming the left side of Pluto’s now famous ‘heart.’

The New Horizons mission has been an outstanding success, but there is a slight frustration in Zangari’s post having to do with the fact that it was a flyby:

I like to think of the whole experience as getting to look at the answer in the back of the book. To extend the back-of -the-book analogy, like many textbooks, we are only getting half the answer. With Pluto, that missing element isn’t the even problems, but time. Our greatest images are from the July 14 closest encounter, and thus we only have one glimpse of one side of Pluto on one day. Yet these images show Pluto as an active world, undergoing volatile-ice transport and change.

True enough — who wouldn’t want to see an orbiter in this fascinating system? — but have a look at the progress we’ve made. Here I’m directly poaching from Zangari’s post to show the best maps we had before the flyby, made from Hubble Space Telescope images in 2002 and 2003. 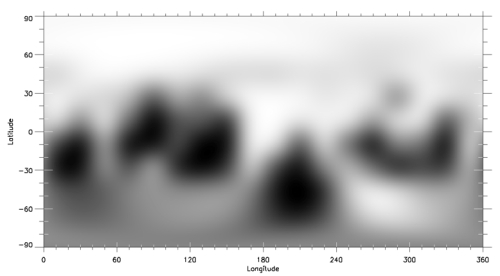 And here we are from New Horizons: 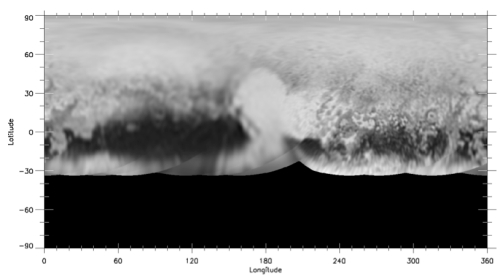 Zangari tells us that her next project involves comparing measurements of Pluto’s brightness as seen by New Horizons from 2013 to 2015 and comparing these to Hubble Space Telescope observations from 2002 to 2003. The goal: To see how Pluto’s surface has changed over time, a good thing to consider given how surprisingly active the Pluto/Charon system has turned out to be. Sad to think that watching Pluto’s continuing evolution now involves Earth-based telescopes alone. Someday there will be a Pluto orbiter, but none of us can know when.