In the past few years, several readers have talked to me about changes to the comment format on Centauri Dreams. In particular, some way of setting up comment ‘threads’ seemed to make sense, and there are various plugins to make this happen. Thanks to all for their input, and in particular Michael Spencer and Daniel Suggs, the latter of whom suggested I check with Judith Curry, who runs the Climate Etc site. A few tweaks with the aid of Dr. Curry and it was done. The new format became available as of last night and I hope the ‘reply’ function proves useful.

On to the Ninth Planet

What stirred me about yesterday’s story on a possible ninth planet was the involvement of Caltech’s Mike Brown, whose general disbelief in any large outer system planet was known. But as Brown tweeted yesterday, he’s now a believer in a nine-planet system (the reference being to Pluto, the planetary status of which was demoted not long after Brown’s discovery of Eris). If Brown were involved, this promised to be pretty solid evidence, even if we didn’t yet have a planet to look at through our telescopes.

OK, OK, I am now willing to admit: I DO believe that the solar system has nine planets.

The image below, taken from the new Search for Planet Nine site, helps make sense of the evidence that leads us to a putative new planet. Back in early 2015, we looked at a paper by Chadwick Trujillo and Scott Sheppard (Carnegie Institution for Science, Washington) that made the case that Sedna and other ‘extreme trans-Neptunian objects’ (ETNOs) could signal the presence of not only a large number of similar objects, but a much larger planet. See A Dwarf Planet Beyond Sedna (and Its Implications).

Mike Brown and Konstantin Batygin used the Trujillo/Sheppard paper, and the discovery of 2012 VP113, also on a Sedna-like orbit, as an inducement to push further into the idea of an outer system planet. This is what Batygin says in an entry on the site:

Prompted by their discovery of 2012 VP113, a second object residing on a Sedna-type orbit, Trujillo and Sheppard pointed out that all Kuiper belt objects with orbits that do not veer into inter-planetary space and spend longer than approximately 2000 years to complete a single revolution around the Sun, tend to cluster in the argument of perihelion. As it turns out, this clustering represents only a part of the full picture. A closer look at the data shows that six objects that occupy the most expansive orbits in the Kuiper belt (including Sedna and 2012 VP113) trace out elliptical paths that point into approximately the same direction in physical space, and lie in approximately the same plane. 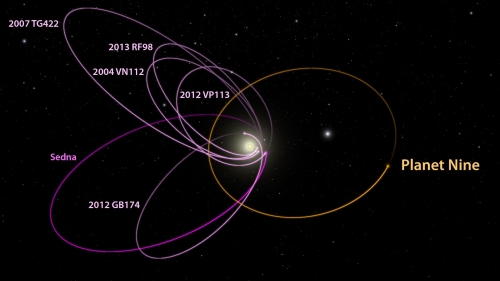 What’s immediately striking here is that Batygin and Brown could use perturbation theory to see what should happen given the gravitational influence of Jupiter, Saturn, Uranus and Neptune. The orbits in question should become randomly oriented over a timeframe much shorter than the age of the Solar System, which means that we can’t harken back to something that happened billions of years ago. Something must be holding these orbits together now.

Looking back at data from Trujillo and Sheppard, Batygin and Brown could, as Batygin says, see that the long axes of the orbits traced out by these distant objects tended to point in the same direction, providing further evidence of something larger influencing these objects. But add a large planet into this scenario and we should see a set of objects whose orbits are sharply tilted when compared to the plane of planetary orbits. And in fact we do know of six objects that behave exactly like this.

What we need to do now is to find the possible planet and take its picture, because all we have is the inference of a planet based upon orbital anomalies in a small number of outer system objects. But the model that the two researchers have developed combines a number of interesting points about the Kuiper Belt as we know it. Batygin adds:

In the end, our model ties together three elusive aspects of the Kuiper belt (namely, physical alignment of the distant orbits, generation of detached objects such as Sedna and the existence of a population tracing our perpendicular orbital trajectories) into a single, unifying picture. As a dynamical model, this appears compelling. But it is simultaneously important to keep in mind that until Planet Nine is caught on camera, it remains a theoretical prediction.

Until we actually see a new planet, both Batygin and Brown will probably continue to experience what the former calls “an uneasy exhilaration.” Meanwhile, the idea that there may be a planetary discovery of the kind Percival Lowell was looking for — a large world deep in the outer system — awakens an almost atavistic enthusiasm. I’ve always been open to the idea that there must be undiscovered planets in our system, but something ten times the mass of the Earth seemed out of the question. Now we have to find out if, as in the case of Neptune, precise mathematical calculations can indeed lead us to an object we can see.

The Brown and Batygin paper is “Evidence for a Distant Giant Planet in the Solar System,” Astronomical Journal, published online 20 January 2016 (full text). Trujillo & Sheppard’s paper is “A Sedna-like body with a perihelion of 80 astronomical units,” Nature 507 (27 March 2014), pp. 471–474 (abstract).