My essay Intensifying the Proxima Centauri Planet Hunt is now available on the European Southern Observatory’s Pale Red Dot site. My intent was to give background on earlier searches for planets around the nearest star, leading up to today’s efforts, which include the Pale Red Dot work using HARPS, the High Accuracy Radial velocity Planet Searcher spectrograph at La Silla, as well as David Kipping’s ongoing transit searches with data from the Canadian MOST satellite (Microvariability & Oscillations of STars), and gravitational microlensing studies by Kailash Sahu (Space Telescope Science Institute). 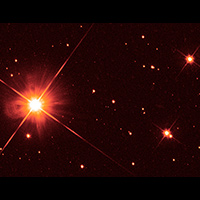 As it turned out, the choice of earlier Proxima planet hunts as a topic fit in where Alan Boss had left off. Boss (Carnegie Institution for Science) had led off the Pale Red Dot campaign’s outreach effort with a piece on the overall background of exoplanetology (Pale Blue Dot, Pale Red Dot, Pale Green Dot). Whatever the color of the distant world, our tools are developing rapidly, and there is a heady sense of optimism that we have what we need to find Proxima planets, assuming they are there. As Boss puts it:

We now know that nearly every star we can see in the night sky has at least one planet, and that a goodly fraction of those are likely to be rocky worlds orbiting close enough to their suns to be warm and perhaps inhabitable. The search for a habitable world around Proxima Centauri is the natural outgrowth of the explosion in knowledge about exoplanets that human beings have achieved in just the last two decades of the million-odd years of our existence as a unique species on Earth. If Pale Red Dots are in orbit around Proxima, we are confident we will find them, whether they are habitable or not.

Saturday was cloudy, but Sunday offered up a fourth HARPS observation window, activity you can follow on Twitter @PaleRedDot. Let me also remind you that David Kipping wrote up the MOST work just prior to its inception in 2014 (see Proxima Centauri Transit Search to Begin). The latest I have from Dr. Kipping is that 13 days of data in that year were followed by another 30 in 2015. We should have results by the summer of this year. As to gravitational microlensing, we have a second occultation of a background star by Proxima coming up in February. Hope grows that we are getting close to a detection by one method or another.

and after losing a data-point on Saturday(clouds :S), we got a fourth HARPS obs today…yey! building up baseline https://t.co/BsC9M2fKNL

I’ve always been surprised that there wasn’t a greater flurry of interest in Proxima Centauri in early science fiction, given that the closest star to the Sun had just been discovered in 1915. Still, a few odd tales emerged, among the more interesting being Henri Duvernois’ L’homme qui s’est retrouvé (1936), which the indispensable Brian Stableford translated in 2010 as The Man Who Found Himself. Here we have a scientific romance in the grand style, with the journey to Proxima Centauri meshing with time travel and an encounter with the protagonist’s doppelgänger. Stableford has done wonders in reawakening interest in French scientific romance; his labors as translator and critic receive all too little credit.

And then there’s Murray Leinster (Will F. Jenkins), whose story “Proxima Centauri” ran in Astounding Stories in March of 1935. Leinster wanted to treat a journey to another star within a different context. Rather than presenting a dream-like moral tale, he showed a starship (the Adastra) that was capable of getting his characters to Proxima well within a human lifetime. The description is heavy on theatrics, minimal on detail, but it’s fascinating to see writers beginning to consider the sociological problems of long voyages. The Adastra will take ten years to reach its destination, and the crew will deal with mutinies, angst and utter boredom as the price of their ticket.

It’s interesting to see science fiction grappling with how to imagine starflight in this era. Coming out of the age of Gernsback, Leinster wanted solutions more satisfying to the science experimenter of the day than simply ignoring what physics was telling us about time and space. But how to do it? The results demanded giving up one kind of magic (faster than light methods) in favor of another, an authorial sleight of hand that tries to slip one over on the reader. Thus we read about the starship Adastra’s “tenuous purple flames,” which were actually “disintegration blasts from the rockets” which had lifted the craft into space, and so on.

Anyone who digs up Leinster’s “Proxima Centauri” today will find that despite its reputation in its own time, it hasn’t aged well, and the interest of the effort will be purely an antiquarian one. But we do see the emergence of a greater appreciation of interstellar distances and the problems of staying within known physics in Leinster’s story (available in Asimov’s Before the Golden Age (Doubleday, 1974). Such efforts stand in stark contrast to anemic tales like Frederick Hester’s “Gipsies of Thos,” (Amazing Stories, May 1935) or Leslie Stone’s “Across the Void” (Amazing Stories April-June 1931), both tales that take us to the Centauri stars as if by magic carpet.

Today’s science fiction gives us a Proxima Centauri of considerably more detail, along with a more realistic assessment of the propulsion conundrum that accompanies the voyage. With that detail we’re also given further mysteries about which to speculate. Here’s Stephen Baxter describing the Proxima planet Per Ardua in his novel Proxima (Roc, 2014):

The weather was overcast, muggy, humid. For such a static world the weather had turned out to be surprisingly changeable, with systems of low or high pressure bubbling up endlessly from the south. It was warm in this unending season, always like a humid summer’s day in North Britain, from what Yuri remembered of the weather. But the ColU, ever curious in its methodical robot way, said it had seen traces of cold: frost-shattered rock, gravel beds, even glaciated valleys in the flanks of features like the Cowpat. Evidence that glaciers had come this way in the past, if not whole ice ages. Somehow this world could deliver up a winter.

It’s a winter caused not by axial tilt but by massive eruptions of starspots on Proxima’s face, driving weather patterns on the kind of tidally locked habitable world we may one day find through our ongoing planet hunts. If and when we do find the ‘pale red dot’ around Proxima, writers will continue imagining it, always tightening the detail as new facts emerge, until one day, we can hope, we have robotic or even human emissaries reporting back from the scene.