Planet in Widest Orbit Yet Discovered

Free floating planets — planets without any star — are exotic things, presumably thrown out of their original solar system by gravitational interactions with other worlds. But the line between such wanderers and bound planets isn’t always clear. A case in point is the object 2MASS J2126, found in an infrared sky survey and at one point considered to be part of a group of young stars known as the Tucana Horologium Association. If linked to this group, its age could be inferred and it was young and low enough in mass to be considered an independent planet.

Now we learn otherwise, as a research team from the United Kingdom, Australia and the United States has determined that 2MASS J2126 is in an extraordinarily wide orbit around the star TYC 9486-927-1. Lead author Niall Deacon (University of Hertfordshire) has been focusing for several years on young stars with planetary companions in wide orbits. But this system has to come as a surprise. The young planet is about 1 trillion kilometers from the star, a whopping 7000 AU. By way of comparison, 2,000–20,000 AU is thought to be the extent of the inner Oort Cloud (also called the Hills cloud) in our system. Proxima Centauri is roughly 15000 AU from Centauri A and B, little more than twice the distance of 2MASS J2126 from its star.

In this work we present the identification of two previously known young objects in the solar neighbourhood, TYC 9486-927-1 and 2MASS J21265040-8140283, as a co-moving wide pair with a probable planetary mass secondary. During an examination of the literature we found that these two objects are separated by 217″ and have similar proper motions. Hence we attempted to better determine their properties to see if they were a likely young, bound system. Using revised astrometry and detailed kinematic analyses of nearby young stars and brown dwarfs, we have determined that this previously known young brown dwarf/free-floating planetary mass object and young low mass star are a likely widely separated bound pair. 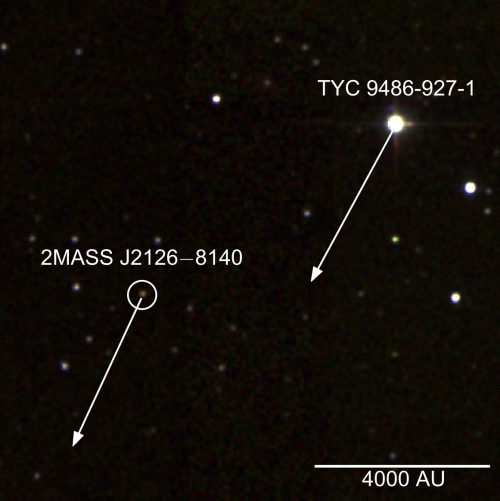 Image: False colour infrared image of TYC 9486-927-1 and 2MASS J2126. The arrows show the projected movement of the star and planet on the sky over 1000 years. The scale indicates a distance of 4000 Astronomical Units (AU), where 1 AU is the average distance between the Earth and the Sun. Credit: 2MASS/S. Murphy/ANU.

Planets in very wide orbits are scarce (the paper calls them ‘a currently small but previously unexpected population of massive gas giant companions to stars’), but we do have four others: WD 0806-661B (2500 AU); GU Psc b (2000 AU); SR12 C (1100 AU); and Ross 458 C (1160 AU). All four of these objects were discovered through direct imaging. Just over 100 light years from Earth, 2MASS J2126 can now lay claim to the widest orbit of any planet found around another star, with each revolution taking some 900,000 years to complete.

“This is the widest planet system found so far and both the members of it have been known for eight years,” said Dr Deacon, “but nobody had made the link between the objects before. The planet is not quite as lonely as we first thought, but it’s certainly in a very long distance relationship.”

As mentioned above, the earlier presumed connection with the Tucana Horologium Association offered a way of establishing the age of the star. But without being able to confirm that connection, Deacon and team studied the parent star’s spectrum, finding that TYC 9486-927-1 shows a stronger signature for lithium that would be expected in 45 million year old stars. Lithium is destroyed early in a star’s life, so the lithium signature can be a valuable marker. The star’s lithium signature is also weaker than ten million year old stars, making the probable age somewhere between the two figures. The paper compares the star to different stellar moving groups (remnants of a stellar association still moving roughly together):

It is clear that the TYC 9486-927-1 has stronger lithium absorption than stars of similar spectral type in TucHor [Tucana Horologium], weaker absorption than TWA [TW Hydrae] members but in reasonable agreement with β Pic [Beta Pictoris] members. Based on this comparison we conclude that TYC 9486-927-1 is older than TWA and likely of similar age or younger than TucHor. Thus, our Li analysis suggests an age comparable to the β Pic moving group, but we note that Li depletion in low-mass stars can be affected by initial conditions (rotation, episodic accretion) and we therefore adopt a conservative age range of 10–45 Myr.

With these age estimates in mind, the team went on to estimate the mass of the planet, which turns out to be on the boundary between planets and brown dwarfs — 11.6 to 15 times the mass of Jupiter. The closest analogue we have to 2MASS J2126, then, is the planet β Pictoris b, although the former is more than 700 times further from its host star. How a planet in such a wide orbit forms in such a system should be interesting fodder for future work.

The paper is Deacon et al., “A nearby young M dwarf with a wide, possibly planetary-mass companion,” in press at Monthly Notices of the Royal Astronomical Society (abstract). An RAS news release is also available.

Next post: In Search of the First Rocket Man