In Search of the First Rocket Man

If you’re interested enough in space to be reading this site, you’ve probably run into the name of Wan Hu. He’s the subject of a tale that may well be spurious, but it’s certainly lively. It seems that some time around the year 1500 AD, Wan Hu took his fascination with rocketry to the logical limit by building a chair equipped with 47 gunpowder rockets. Lit by 47 attendants, the combined rockets took Wan Hu somewhere, but just where is unknown, as he is said to have disappeared with a loud bang, leaving only a pall of smoke hanging over the scene. 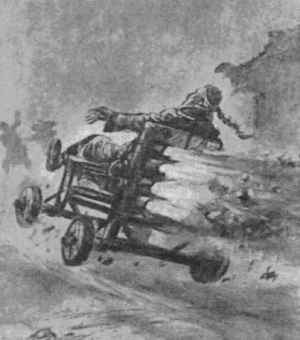 The first rocket man? Maybe. But experts on science in China find it more likely that the tale was invented somewhere in Europe, during a period (17th-19th century) when Chinese motifs were much in vogue. Frank Winter (National Air and Space Museum, Washington DC) did his own investigation and could find no mention of Wan Hu in Ming Dynasty biographical guides or histories. And apparently there are variants involving not Wan Hu but ‘Wang Tu,’ who is said to have lived 2000 years ago. This story popped up in a 1909 issue of Scientific American and involves the same rocket chair, but Wang Tu manages to survive.

I have all this from a wonderful 1992 paper that Winter wrote for the Journal of the British Interplanetary Society, sent to me by my friend Al Jackson. Al was wondering about a fellow named Frederick Rodman Law, who like Wan Fu was obsessed with rockets. I had never heard of Law either, but in Winter’s view, in Law we have the first proven occurrence of pre-Space Age manned rocket flight, an event that took place in 1913. Known as ‘the human bullet’ and other professional names, Law was a showman and Hollywood stunt man whose sister was flyer Ruth Law.

Law’s plan (according to the New York Times: To blast off from Jersey City, NJ and land in Elizabeth, about nineteen kilometers away (Winter thinks the rocket would actually have landed either back in Jersey City or in Newark if it had worked). Law’s rocket was 14 meters tall, ending in a conical steel cap with an opening for Law to crawl into. 408 kg of gunpowder provided the punch, evidently supplied by the International Fireworks Co. Law intended to ride the rocket up to about 1000 meters and then jump out so as to parachute to Earth. 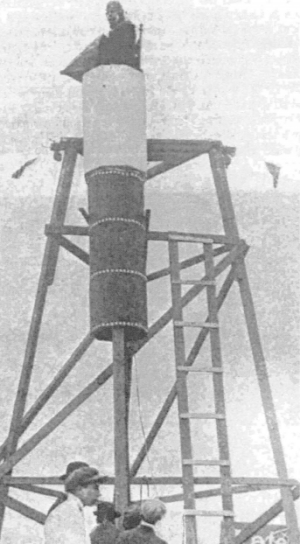 Winter draws on the New York Times account of what happened:

A crowd of about 150 people gathered that morning to see Law off. His rocket was set “on a mound of earth surrounded by marsh and rushes.” Continued the Times: “A motion picture operator became active when Law himself appeared, clad in khaki [if it still exists, this film has never been found]… When all the preliminary scenes had been duly recorded Law mounted a scaffold which had been built besides the rocket to enable him to reach his seat, which was about 18 feet (5.4m) above the ground. “You may light the fuse when ready, Sam (Samuel L. Serpico, Manager of the International Fireworks Co.), announced Law after he had taken the seat.

“The motion picture man rapidly placed a high-power lens on his machine to follow the shaft to Elizabeth… The spark climbed up several feet of fuse, sputtering menacingly… After a few seconds there was a terrific explosion with a shock that threw most of the crowd to the ground [as] the big projectile burst into a thousand pieces…

The amazing thing is that, unlike Wan Fu, Law did not join his ancestors at this point. He was thrown about nine meters from the rocket, and a physician in the crowd discovered that the only thing wrong with him was scorching to his hands and face, although his clothes were a mess. Law would go on to perform such feats as climbing the US Capitol dome (the police stopped the stunt), and dropping from an exploding balloon, exploding craft evidently being his trademark. When he did eventually die in 1919, it was quietly, of tuberculosis, in South Carolina.

Winter’s paper is worth checking out if you’re near a library with JBIS available. He goes into various tales worldwide, such as that of Lagari Hasan Çelebi, who was said to have flown a gunpowder rocket to altitude in the 17th Century and then coasted down after deploying ‘wings’ on the device to land. Like Wan Hu, the tale has never been corroborated. We also have stories like that of Claude-Fortuné Ruggieri, a doughty pyrotechnist who somewhere around 1830 constructed a rocket that was to launch a man from the Champ de Mars in Paris. This attempt was fairly well along, but when the volunteer pilot turned out to be a small boy, the police stepped in and banned the flight. Ruggieri’s tale, too, is hard to corroborate.

Perhaps the strangest of the many tales in Winter’s paper is his account of a ‘Signor Camarara,’ presented as an attraction at the 1901 Pan-American Exposition in Buffalo, NY. Said to be a ‘human skyrocket,’ Camarara was said in a newspaper account to have previously flown a rocket near the turn of the century in Callao, Peru. The vehicle was said to have had four exhausts, all of which used a strange, secret fuel Camarara called ‘dynoascenemite.’ Blasting off, Camarara was lofted to almost 5000 meters before landing safely by parachute.

Winter, as you would imagine, will have none of this one, pointing out that even Robert H. Goddard had trouble reaching altitudes like this with much more efficient liquid-fueled rockets decades later. Like other rocket man tales Winter has collected, Camarara’s story was surely a hoax, speaking to the power rockets held over daredevils and cranks early in their development, as well as to the gullibility of those willing to believe such astounding stories.

But we have to give Frederick Rodman Law credit. He had plenty of witnesses, was well advertised, and had the guts to climb into a gunpowder-fueled rocket with the cameras rolling. Good for Frank Winter for telling his tale. Just ahead were the Opel-RAK rocket vehicles, including the Opel RAK.1, a rocket glider flown in 1929 in Germany, and the various rocket-powered aircraft developed by Allied and Axis powers during World War II, the most famous being the Me-163 and the suicidal Japanese Yokosuka MXY-7 Ohka. The story of the rocket was quickly going from tall tale and stunt to scientific fact.