Newly interpreted data from the New Horizons spacecraft tells us that Pluto has more water ice on its surface than we once thought. The image below tells the tale, a false-color view derived from observations by the Ralph/Linear Etalon Imaging Spectral Array (LEISA) instrument. Here we’re at infrared wavelengths and can see areas showing the spectral signature of water ice. Note the sharp contrast between the left and right sides of the image below. 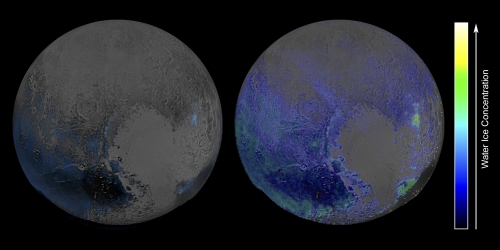 Image: This false-color image is derived from observations in infrared light by the Ralph/Linear Etalon Imaging Spectral Array (LEISA) instrument. It is based on two LEISA scans of Pluto obtained on July 14, 2015, from a range of about 108,000 kilometers. Credit: NASA/Johns Hopkins University Applied Physics Laboratory/Southwest Research Institute.

The two scans, as this JHU/APL news release explains, were taken about fifteen minutes apart and merged into a ‘data cube’ — a three-dimensional array covering the hemisphere New Horizons could see during the flyby last summer, where an image of Pluto is formed at each wavelength of light to which LEISA is sensitive. The map on the left was made by comparing LEISA spectra with a pure water ice template spectrum. When using this technique, methane ice can easily mask the spectral signature of water ice.

The result: A map sensitive only to those areas particularly rich in water or depleted in methane. On the right is an image that more fully models the various ices, showing the true extent of water ice. Interestingly, we still see little water ice in Sputnik Planum (left of Pluto’s ‘heart’) and Lowell Regio (far north on the encounter hemisphere). This would indicate that the ice ‘bedrock’ is buried beneath a thick blanket of ices like methane, nitrogen and carbon monoxide.

We’re also working with data from the LEISA instrument in the image below. Captured on July 14, 2015 at a distance of 180,000 kilometers, the image covers the full spectral range (1.25 to 2.5 microns) of the instrument. North in the image is at about the 10 o’clock position. 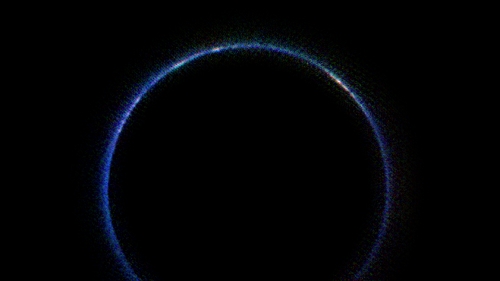 The blue ring we see in the image is the result of sunlight scattering off haze, as JHU/APL explains in this second news release:

…scientists believe the haze is a photochemical smog resulting from the action of sunlight on methane and other molecules, producing a complex mixture of hydrocarbons such as acetylene and ethylene. These hydrocarbons accumulate into small particles – a fraction of a micrometer in size – which scatter sunlight to make the blue haze.

Infrared images like these can be combined with images made at shorter wavelengths to help researchers understand the size distribution of the particles. The New Horizons team tells us that the white patches that show up around Pluto’s limb are where sunlight is bouncing off more reflective areas on Pluto’s surface. The largest of these would be the the area now being called Cthulhu Regio (the H.P. Lovecraft reference still delights me). We have much more data ahead from New Horizons, and can expect fuller views of the atmosphere in the course of the year.

A Change at the Top 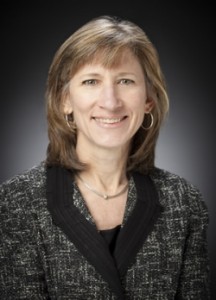 “Over the past 15 years New Horizons has had two of the finest project managers in the space business, the late Tom Coughlin, who helped conceive the mission, and the legendary Glen Fountain, who built New Horizons and flew us to Pluto. Helene Winters, from a new generation and with incredible experience behind her, is going to set new milestones flying the spacecraft farther, hopefully to the first ever flyby of a Kuiper Belt object and onward toward the edge of our planetary system!”

The outer system, as we’ve learned in recent days, is getting more and more interesting. As we look forward to the New Horizons KBO flyby in January of 2019, we should also keep pondering the kind of follow-up mission that New Horizons merits. We need observations of the local interstellar medium beyond the heliosphere and we also have a wide range of Kuiper Belt targets, not to mention the eventual goal of reaching the Sun’s gravity focus at 550 AU. Tune up the technologies to reach these distances and, if it’s really out there, we might just visit the hypothesized Planet Nine.

Next post: A Telescope Eight Times the Diameter of Earth