Given that we have four planets in our Solar System with rings, it’s a natural thought that if so-called Planet Nine does exist, it might likewise show a system of rings. After all, Caltech’s Konstantin Batygin and Mike Brown are talking about a planet with a mass on the order of ten times that of the Earth. Neptune is about 17 Earth masses, while Uranus is 14.5 as massive. If Planet Nine is an ejected ice giant, perhaps it joins Uranus, Neptune, Jupiter and Saturn in having a ring system of its own, along with a thick atmosphere of hydrogen and helium.

Of course, we have to discover Planet Nine first, a process that may take some time if, indeed, it is successful. Meanwhile, we have interesting developments in the Solar System’s most intriguing ring system. As compared with those of other planets, Saturn’s rings are visually stunning. The B ring is the brightest and most opaque of the planet’s rings, but now we’re finding out that brightness and opacity have little correlation with how dense a ring may actually be. In fact, more opaque areas in the rings do not necessarily contain more material. 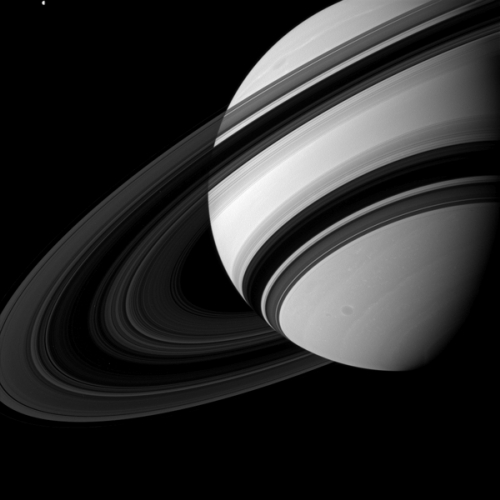 Image: Even Saturn’s rings appear to dwarf Tethys (1,062 kilometers across), which is in the upper left of the image, although scientists believe the moon to be many times more massive than the entire ring system combined. This view looks toward the unilluminated side of the rings from about 18 degrees below the ringplane. The image was taken in green light with the Cassini spacecraft wide-angle camera on Aug. 19, 2012. The view was acquired at a distance of approximately 2.4 million kilometers from Saturn and at a Sun-Saturn-spacecraft, or phase, angle of 63 degrees. Image scale is 138 kilometers per pixel. Credit: NASA/JPL-Caltech/Space Science Institute.

This is work using Cassini data that goes about the complicated process of ‘weighing’ the opaque center of the B ring, which involves analyzing spiral density waves within the structure. These fine-scale ring features are pulled into existence by Saturn’s gravity and that of individual moons tugging on ring particles, their structure reflecting the amount of mass in given parts of the rings. While different levels of opacity are obvious, the results on mass are puzzling.

Matthew Hedman (University of Idaho), who is lead author on the work and a participating scientist in the Cassini mission that collected the needed data, frames the problem this way:

“At present it’s far from clear how regions with the same amount of material can have such different opacities. It could be something associated with the size or density of individual particles, or it could have something to do with the structure of the rings.”

So we have a prominent B ring whose opacity varies markedly across its width, while the amount of material in it does not seem to vary greatly from one part of the ring to another. Cassini co-investigator Phil Nicholson (Cornell University) notes that appearances aren’t always what we think. “A good analogy is how a foggy meadow is much more opaque than a swimming pool,” says Nicholson, “even though the pool is denser and contains a lot more water.”

Just what it is about Saturn’s rings that sets them so far apart from the other rings in our Solar System is an open question. As this JPL news release points out, an earlier study by Cassini’s composite infrared spectrometer team has suggested that there was less material in the B ring than researchers once thought. This new work measures the density of mass in the ring for the first time to corroborate the idea. The researchers were able to use data from Cassini’s visible and infrared mapping spectrometer as the craft looked through the rings toward a bright star. The method helped to identify spiral density waves that were otherwise not apparent.

From the paper in press:

… this new estimate of the ring’s total mass is based on just a few locations in the B ring, and so one could argue that most of the B-ring’s mass is hidden in the truly opaque parts of the rings. However, the measurements considered here include regions with optical depths between 3.5 and 4.5, so these massive regions would have to be those with opacities above 4 or 5. Note that only about 27% of the ring’s surface area has an optical depth greater than 4, and less than 16% has an optical depth above 5, so there is not much space to hide a large amount of mass.

Understanding how the rings are constituted is a step toward understanding their age and origin. While the B ring is thought to contain the bulk of material in the ring system, it’s still surprising that the B ring may have only two to three times the mass of the A ring. Parts of the B ring are, after all, up to ten times more opaque than the A ring. We can look to one of Cassini’s last acts, in 2017, to help extend our data. The spacecraft, enroute to an ultimate descent into Saturn’s clouds, will fly just inside the rings, offering measurements that will help us separate the mass of the rings in the aggregate from the previously measured combined mass of planet and rings.

The paper is Hedman and Nicholson, “The B-ring’s surface mass density from hidden density waves: Less than meets the eye?” in press at Icarus and available online 22 January 2016 (abstract).

Previous post: A New Look at the ‘Big Whack’