Probing the Interior of a Comet

Knowing what comets are made of — dust and ice — only begins to answer the mystery of what is inside them. A compact object with this composition should be heavier than water, but we know that many comets have densities much lower than that of water ice. The implication is that comets are porous, but what we’d still like to know is whether this porosity is the result of empty spaces inside the comet or an overall, homogeneous low-density structure.

For answers, we turn to the European Space Agency’s continuing Rosetta mission. In a new paper in Nature, Martin Pätzold (Rheinische Institut für Umweltforschung an der Universität zu Köln, Germany) and team have gone to work on the porosity question by analyzing Comet 67P/Churyumov-Gerasimenko, around which Rosetta travels. It’s no surprise to find that 67P/Churyumov-Gerasimenko is a low-density object, but an examination of the comet’s gravitational field shows that we can now rule out a cavernous interior. 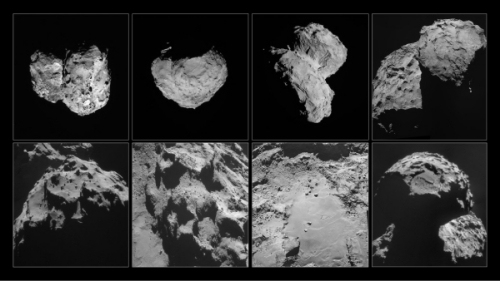 This is tricky work performed using Rosetta’s Radio Science Experiment (RSI) to examine just how the Rosetta orbiter is affected by the gravity of the comet. And just as we do when measuring the tiniest motions of distant stars to search for planetary companions, the researchers use Doppler methods to make the call, measuring how signals from the spacecraft change in frequency as Rosetta is affected by the comet’s gravity. In this way we can build up a picture of the gravity field across the comet while working to rule out other influences.

“Newton’s law of gravity tells us that the Rosetta spacecraft is basically pulled by everything,” says Pätzold, the principal investigator of the RSI experiment. “In practical terms, this means that we had to remove the influence of the Sun, all the planets – from giant Jupiter to the dwarf planets – as well as large asteroids in the inner asteroid belt, on Rosetta’s motion, to leave just the influence of the comet. Thankfully, these effects are well understood and this is a standard procedure nowadays for spacecraft operations.”

As this ESA news release explains, the team wasn’t through even after compensating for all these other Solar System bodies. Also to be considered was the pressure of solar radiation and the gas escaping through the comet’s tail. Rosetta uses an instrument called ROSINA to measure the flow of gas past the spacecraft, allowing its effect to be measured. No sign of large internal caverns emerged from the analysis.

We’re lucky with 67P/Churyumov-Gerasimenko in that the comet turned out not to be round, as ground-based observations had previously suggested. As we’ve gotten to know the comet, its distinctive double-lobed shape has proven not only visually interesting but scientifically helpful. The twin lobes mean that differences in the gravity field are more pronounced and easier to study from the 10 kilometer distance Rosetta had maintained for reasons of safety. With variations in the gravity field already showing from 30 kilometers out, the much richer measurements from 10 kilometers could proceed.

The result: Comet 67P/Churyumov-Gerasimenko is found to have a mass of slightly less than 10 billion tonnes. By using images from Rosetta’s OSIRIS camera, the team was able to model the comet’s shape so as to produce a volume of approximately 18.7 km3, yielding a density of 533 kg/m3. Given this and the lack of large interior spaces, we can look at the comet’s porosity as a property of its constituents. Rather than a compacted solid, comet dust is more of a ‘fluffy’ aggregate of high porosity and low density.

Image: Rosetta from Earth, in an image taken by Paolo Bacci on February 6, 2016 from San Marcello Pistoiese, Italy.

Keep your eye on Rosetta. In September, the spacecraft will be brought in for a controlled impact on the surface, a challenging navigational feat for controllers at ESA’s European Space Operations Centre (ESOC) in Darmstadt, Germany. Closing on the comet will allow the gravity observations to continue at a much higher level of detail, making it possible for caverns only a few hundred meters across to be detected, if indeed they are there at all.