We’ve gone from discovering the presence of exoplanets to studying their atmospheres by analyzing the spectra produced when a planet transits in front of its star. We’re even in the early stages of deducing weather patterns on some distant worlds. Now we’re looking at probing the inside of planets to learn whether their internal structure is something like that of the Earth.

The work is led by Li Zeng (Harvard-Smithsonian Center for Astrophysics), whose team developed a computer model based on the Preliminary Reference Earth Model (PREM), the standard model for the Earth’s interior. Developed by Adam Dziewonski and Don L. Anderson for the International Association of Geodesy, PREM attempts to model average Earth properties as a function of radius. Zeng adjusted the model for differing masses and compositions and applied the revised version to six known rocky exoplanets with well understood characteristics.

The work shows that rocky worlds should have a nickel/iron core that houses about thirty percent of the planet’s mass, with the remainder being mantle and crust. “We wanted to see how Earth-like these rocky planets are,” says Zeng. “It turns out they are very Earth-like.”

These dense exoplanets between 2 and 5 M⊕ so far appear to agree with the mass-radius relation with CMF [Core Mass Fraction] ≈ 0.26, suggesting that they are like the Earth in terms of their proportions of mantle and core. But their surface conditions are utterly different as they are much too hot. This is due to observational bias that currently it is much easier for us to detect close-in planets around stars. The fact that we now see so many of them suggests there may be abundant Earth-like analogs at proper distances from their stars to allow existence of liquid water on their surfaces. 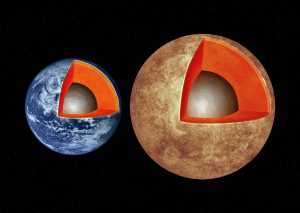 Image: This artist’s illustration compares the interior structures of Earth (left) with the exoplanet Kepler-93b (right), which is one and a half times the size of Earth and 4 times as massive. New research finds that rocky worlds share similar structures, with a core containing about a third of the planet’s mass, surrounded by a mantle and topped by a thin crust. M. Weiss/CfA.

The paper points out that these conclusions fit with studies of disintegrated planet debris in polluted white dwarf spectra. Here the remnant of a star like the Sun has evidently swallowed up planetary materials, usefully producing spectra that can be analyzed to see what elements emerge. Such studies indicate debris that resembles the composition of the Earth, where over 85 percent of the mass is composed of oxygen (O), magnesium (Mg), silicon (Si), and iron (Fe). Moreover, we find similar ratios of iron to silicon and magnesium to silicon. These ratios indicate formation processes similar to those we find in our own Solar System:

Current planet formation theory suggests that the solar nebula was initially heated to very high temperatures to the extent that virtually everything was vaporized except for small amount of presolar grains… The nebula then cools to condense out various elements and mineral assemblages from the vapor phase at different temperatures according to the condensation sequence… Fe-Ni [nickel] metal alloy and Mg-silicates condense out around similar temperatures of 1200-1400K (depending on the pressure of the nebula gas) according to thermodynamic condensation calculation… Oxygen, on the other hand, does not have a narrow condensation temperature range, as it is very abundant and it readily combines with all kinds of metals to form oxides which condense out at various temperatures as well as H [hydrogen], N [nitrogen], C [carbon] to form ices condensing out at relatively low temperatures… As supported by the polluted white dwarf study, we expect other exoplanetary systems to follow similar condensation sequence as the solar system in a H-dominated nebular environment for the major elements: Fe, Mg, Si, and O…

The assumption of chemical compositions similar to the Earth’s may come into question in parts of the galaxy that are less rich in metals, in which case different planetary interior structures could evolve, a subject Zeng and team plan to investigate in future research.

The paper is Zeng et al., “Mass-Radius Relation for Rocky Planets based on PREM,” accepted at The Astrophysical Journal (preprint).