Light, Dry Atmosphere of a ‘Super-Earth’

We’re probing the atmospheres of exoplanets both from the Earth and from space. Transmission spectroscopy allows us to look at the spectra of starlight at various wavelengths as a transiting planet passes first in front of its host star, and then moves behind it. Now we have news of a successful detection of gases in the atmosphere of a super-Earth, using data from the Hubble Space Telescope. The team, made up of researchers at University College London and Catholic University of Leuven (Belgium) calls this a significant first.

“This is a very exciting result because it’s the first time that we have been able to find the spectral fingerprints that show the gases present in the atmosphere of a super-Earth,” said Angelos Tsiaras, a PhD student at UCL, who developed the analysis technique along with colleagues Dr. Ingo Waldmann and Marco Rocchetto in UCL Physics & Astronomy. “Our analysis of 55 Cancri e’s atmosphere suggests that the planet has managed to cling on to a significant amount of hydrogen and helium from the nebula from which it formed.” 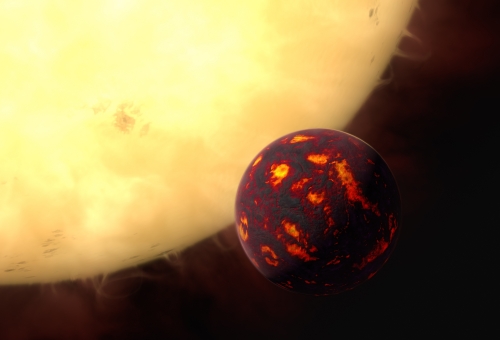 Image: This artist’s impression shows the super-Earth 55 Cancri e in front of its parent star. Using observations made with the NASA/ESA Hubble Space Telescope and new analytic software scientists were able to analyze the composition of its atmosphere. It was the first time this was possible for a super-Earth. 55 Cancri e is about 40 light-years away and orbits a star slightly smaller, cooler and less bright than our Sun. As the planet is so close to its parent star, one year lasts only 18 hours and temperatures on the surface are thought to reach around 2000 degrees Celsius. Credit: ESA/Hubble, M. Kornmesser.

55 Cancri, about 41 light years from the Sun, is a binary consisting of a G-class star (55 Cancri A) and an M-class dwarf (55 Cancri B). We know of five planets around 55 Cancri A, the innermost being 55 Cancri e. If you’re worried about the nomenclature, that’s because we could more formally call the planet 55 Cancri Ae, in order to clarify which star the planet orbited in a binary system. All five known planets orbit 55 Cancri A, with 55 Cancri B some 1065 AU out.

Although it is a transiting world, 55 Cancri e and all the other planets in the system were discovered by radial velocity measurements. Temperatures on 55 Cancri e are thought to reach 2000 degrees Celsius on a world whose year is a scant eighteen hours. With a minimum mass of 8.3 M⊕, the planet has a radius about twice that of the Earth.

Tsiaras and team used the Wide Field Camera 3 (WFC3) on Hubble, retrieving 55 Cancri e’s spectral signature by capturing a number of spectra made with quick scans across the target. The method allows the telescope to slew during the exposure, preventing saturation of the detector. The results were then fed through pipeline software that could remove systematic distortions caused by the scanning method. The paper explains the nature of the correction:

In the case of very long scans, we have to take into account the geometric distortions (dispersion variations across the scanning direction and inclined spectrum) and the positional shifts (horizontal and vertical), as their effect on the structure of the spatially scanned spectrum becomes significant. Especially for fast scans, we found that the vertical shifts are as important as the horizontal ones, because they are coupled with the reading process of the detector (up-stream/down-stream effect), causing exposure time variations. We also found that the time-dependent, long-term systematics, appear to have a different behavior per wavelength channel.

The resulting data show hydrogen and helium in the atmosphere of 55 Cancri e, but no water vapor. There is also an intriguing hint of hydrogen cyanide (HCN) with a possible additional
contribution of other molecules, such as carbon monoxide (CO) , carbon dioxide (CO2) and acetylene (C2H2). HCN is considered to be a marker for carbon-rich atmospheres, which weaves in usefully with what was previously known of the planet. 55 Cancri e has sometimes been called the ‘diamond planet’ because of the possibility that it might have a carbon-rich interior. The current work points in the same direction, with its indication that the planet’s atmosphere has a high ratio of carbon to oxygen.

“If the presence of hydrogen cyanide and other molecules is confirmed in a few years time by the next generation of infrared telescopes, it would support the theory that this planet is indeed carbon rich and a very exotic place,” said Professor Jonathan Tennyson, UCL. “Although, hydrogen cyanide or prussic acid is highly poisonous, so it is perhaps not a planet I would like to live on!”

The paper is Tsiaras et al., “Detection of an Atmosphere Around the Super-Earth 55 Cancri e,” accepted at The Astrophysical Journal (preprint).