WFIRST: Moving Closer to a Mission

We learned on Wednesday that the Agency Program Management Council, which works under the aegis of NASA, has made the decision to proceed with the Wide Field Infrared Survey Telescope. WFIRST is the next step in major astrophysical observatories after the launch of the James Webb Space Telescope in 2018, an instrument that will work at near-infrared wavelengths to study dark matter and dark energy, with a significant exoplanet component.

All these issues are relevant to what we do here at Centauri Dreams, but the exoplanet aspect of the mission, which includes a coronagraph to allow the close inspection of distant solar systems, is particularly interesting. Blocking the otherwise overwhelming glare of a host star (even at these wavelengths), the WFIRST coronagraph should help to reveal the planets around it, a crucial separation that will allow us to make spectrographic measurements of the chemical makeup of planetary atmospheres.

Paul Hertz, director of NASA’s astrophysics division in Washington, notes that the instrument responds to the astronomical community’s top priorities for research:

“The Wide-Field Instrument will give the telescope the ability to capture a single image with the depth and quality of Hubble, but covering 100 times the area,” Hertz adds. “The coronagraph will provide revolutionary science, capturing the faint, but direct images of distant gaseous worlds and super-Earths.” 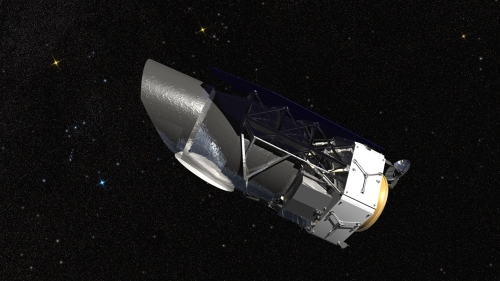 Image: WFIRST, the Wide Field Infrared Survey Telescope, is shown here in an artist’s rendering. It will carry a Wide Field Instrument to provide astronomers with Hubble-quality images covering large swaths of the sky, and enabling several studies of cosmic evolution. Its Coronagraph Instrument will directly image exoplanets similar to those in our own solar system and make detailed measurements of the chemical makeup of their atmospheres. Credit: NASA/Goddard Space Flight Center/Conceptual Image Lab.

The mission will carry a 2.4-meter telescope and will operate at the Lagrangian point L2, about 1.6 million kilometers from the Earth in a direction directly opposite the Sun. Launch is scheduled for the mid-2020s. Monitoring millions of stars in the galactic center, WFIRST is likely to uncover thousands of new exoplanets, following on directly from the phenomenal work of the Kepler mission and the upcoming Transiting Exoplanet Survey Satellite (TESS). The latter takes the exoplanet hunt from the single star-field Kepler used to compile its statistical data and homes in on closer and brighter stars, deepening our catalog of nearby planets.

WFIRST’s roots are in dark energy studies, looking into the negative pressure that is evidently speeding up the expansion of the universe, an issue that can be studied by measuring the distances of thousands of supernovae. As a matter of fact, the mission was first examined in the Decadal Survey of 2010 as primarily a dark energy research telescope, with exoplanet studies via microlensing as no more than a secondary goal. But the donation of two 2.4-meter telescopes to NASA from the National Reconnaissance Office made alterations to the original configuration possible with a primary mirror the same size as the Hubble Space Telescope’s.

The full story of WFIRST’s changing configuration can be found in Ashley Baldwin’s article The Shape of Space Telescopes to Come, which appeared here in 2015 and looked at coronagraph technologies as well as starshades, the latter being large occulting disks that operate as independent spacecraft and are placed between the primary telescope and the star being studied. Exoplanet light comes through as the light of the central star is blocked. The coronagraph WFIRST has wound up with will be delivered from the Jet Propulsion Laboratory.

In his article, Baldwin refers to WFIRST as ‘the first true exoplanet telescope.’ The first, that is, that will be able to see a distant exoplanet as a point source, an instrument capable of direct imaging of exoplanets using its coronagraph while also discovering them through gravitational micro-lensing, where the light of a distant object is bent by the passage of an intervening star and associated planets, allowing one or more planets to be revealed. Planets should turn up in the thousands through transit discoveries as well as astrometry for relatively nearby stars.

WFIRST, in other words, is a mission that has evolved as the various scientific interests have had their say and developed mission concepts for exoplanets, dark energy and dark matter. Although it carries a coronagraph along with its Wide Field Instrument, the space telescope could presumably be rendered ‘starshade-ready’ in hopes of subsequent studies using that method. The success of both the James Webb Space Telescope and WFIRST should have a lot to say about the shape of the coming Decadal Survey that will chart the course after 2020.