Charon: Evidence of an Ancient Ocean

I will admit to a fascination with Pluto’s moon Charon that began even before it was discovered. Intrigued by the most distant places in the Solar System, I had always imagined what the view would be like from a tiny moon circling Pluto. At the time, we didn’t know about Charon, so my vantage point was more like what we now know Kerberos or Styx to be. Then my interest tripled when the sheer size of Charon became known. A large moon was truly a world of its own, and Charon rose in my estimation to rival my other most intriguing moon, Neptune’s Triton.

Now we have word that Charon may once have had an internal ocean, still further evidence of the intricacy of objects in or near the Kuiper Belt. In Charon’s case, something intriguing is shown by a study of the surface, one side of which New Horizons saw during the July 2015 flyby. What appears to be a series of tectonic faults that show up in the form of ridges, scarps and valleys reveals a surface that has to have been stretched over time. 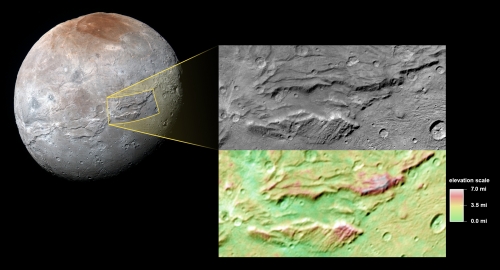 Image: Charon from New Horizons. This image was obtained by the Long-Range Reconnaissance Imager (LORRI) on New Horizons. North is up; illumination is from the top-left of the image. The image resolution is about 394 meters per pixel. The image measures 386 kilometers long and 175 kilometers wide. It was obtained at a range of approximately 78,700 kilometers from Charon, about an hour and 40 minutes before New Horizons’ closest approach to Charon on July 14, 2015. Credit: NASA/Johns Hopkins University Applied Physics Laboratory/Southwest Research Institute.

Remember that on the young Charon, radioactive elements and residual heat from formation could have kept the outer layer of water ice warm enough to melt, creating an ocean beneath the outermost ice crust. Cooling over time would have caused the ocean to freeze and expand, pushing the surface outward to produce the topography New Horizons encountered.

Have another look, then, at the image, which is taken from this JHU/APL news release. At the top right, you can see the feature called Serenity Chasma, which is actually only a part of an equatorial belt of chasms that runs about 1800 kilometers, reaching depths of up to 7.5 kilometers. The lower part of the image provides color-coded topography of the same area. Researchers on the New Horizons team believe the image shows evidence of liquid water that has refrozen over the aeons.

Last spring before the New Horizons flyby I briefly mentioned Stephen Baxter’s “Gossamer.” It’s a short tale in his highly recommended 1997 collection Vacuum Diagrams, following two explorers who have made a forced landing on Pluto only to discover a bizarre form of life that looks like snowflakes. Here’s the relevant bit:

Lvov caught glimpses of threads, long, sparkling, trailing down to Pluto — and up toward Charon. Already, Lvov saw, some of the baby flakes had hurtled more than a planetary diameter from the surface, toward the moon.

“When I was a kid…the young spiders spin bits of webs, and climb to the top of grass stalks, and float off on the breeze. Goose summer — ‘gossamer.’”

“Right,” Cobh said skeptically. “Well, it looks as if they are making for Charon. They use the evaporation of the atmosphere for life… Perhaps they follow last year’s threads, to the moon. They must fly off every perihelion, rebuilding their web bridge every time…”

Baxter paints a living, interacting system that draws resources from both worlds. Nothing like that in the New Horizons imagery, of course, but plenty of food for thought as we consider the resources of water ice and potential sub-surface oceans even this far from the Sun. Whether any liquid water could survive through the decay of radioactive elements deep within a Kuiper Belt object is debatable, but Charon appears to be showing us what happens when such an ocean finally freezes, its surface ripped apart to create today’s massive chasms.