Protecting Life on the Early Earth

Kappa Ceti is a young star — 400 to 600 million years old — in the constellation Cetus (the Whale). It’s a tremendously active place, its surface disfigured by starspots much larger and more numerous than we find on our more mature Sun. In fact, Kappa Ceti hurls enormous flares into nearby space, ‘superflares’ releasing 10 to 100 million times the energy of the largest flares we’ve ever observed on the Sun. What would be the fate of planets around a star like this?

The question is directly relevant to our own system because Kappa Ceti is a G-class dwarf much like the Sun, giving us a look at what conditions would have been like when our own system was forming. The calculated age of the star, extrapolated from its spin, corresponds to the time when life first appeared on the Earth. Thus we’re seeing a model of our distant past, one that makes it clear that a magnetic field is an essential for planetary habitability.

The violent activity on the surface of Kappa Ceti is driving a steady stream of plasma into space, a ‘stellar wind’ that is fifty times stronger than what we observe from the Sun. A planet without a strong magnetic field would potentially lose most of its atmosphere in this maelstrom. Lead author Jose-Dias do Nascimento (Harvard-Smithsonian Center for Astrophysics) and team note in the paper on this work that the 400 to 600 million year time frame in stellar age also corresponds to the time when Mars lost its liquid water some 3.7 billion years ago.

Understanding the interactions between the stellar wind and the surrounding planetary system, then, helps us get a read on the early history of our own system. From the paper:

A key factor for understanding the origin and evolution of life on Earth is the evolution of the Sun itself, especially the early evolution of its radiation field, particle and magnetic properties. The radiation field defines the habitable zone, a region in which orbiting planets could sustain liquid water at their surface (Huang 1960; Kopparapu et al. 2013). The particle and magnetic environment define the type of interactions between the star and the planet. In the case of magnetized planets, such as the Earth that developed a magnetic field at least four billion years ago (Tarduno et al. 2015), their magnetic fields act as obstacles to the stellar wind, deflecting it and protecting the upper planetary atmospheres and ionospheres against the direct impact of stellar wind plasmas and high-energy particles (Kulikov et al. 2007; Lammer et al. 2007). 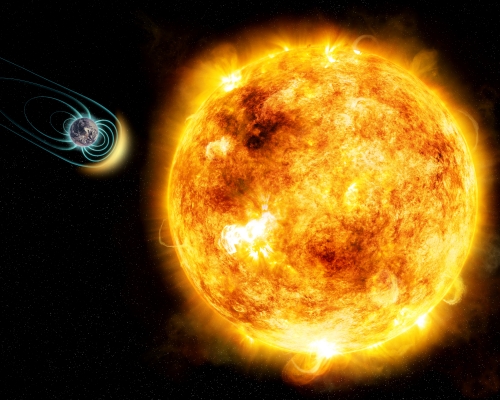 Image: In this artist’s illustration, the young Sun-like star Kappa Ceti is blotched with large starspots, a sign of its high level of magnetic activity. New research shows that its stellar wind is 50 times stronger than our Sun’s. As a result, any Earth-like planet would need a magnetic field in order to protect its atmosphere and be habitable. The physical sizes of the star and planet and distance between them are not to scale. M. Weiss/CfA.

The researchers used spectropolarimetric observations — measuring the optical properties of polarized light at different wavelengths — to analyze Kappa Ceti’s magnetic fields, combining these with models of stellar winds. Data were collected using a spectropolarimeter at the 2-meter Bernard Lyot Telescope (TBL) of Pic du Midi Observatory in the French Pyrenees.

Working with the magnetic properties of the young Earth and factoring in the strength of the young Sun’s plasma outflows allowed the team to estimate the size of the early Earth’s magnetosphere, which is found to be one-third to one-half as large as it is today. “The early Earth,” says do Nascimento, “didn’t have as much protection as it does now, but it had enough.”

The paper is do Nascimento et al., “Magnetic field and wind of Kappa Ceti: towards the planetary habitability of the young Sun when life arose on Earth,” accepted for publication at The Astrophysical Journal (preprint). A CfA news release is also available.

Previous post: What Ceres’ Bright Spots Can Tell Us