Herewith the first of several reports on the recent Tennessee Valley Interstellar Workshop; more next week. It comes from Doug Loss, who was a participant in the Homo Stellaris working track I had hoped to attend before illness changed my plans. An experienced network and IT security administrator, Doug attended and eventually organized The Asimov Seminar from 1977 until the early 2000s, a yearly, four-day-long retreat at a conference center in upstate New York. Isaac Asimov, the noted science fiction author, was the star of the Seminar and its main draw until his death in 1992. Each year the Seminar would explore a different topic having to do with the future of human society, with Seminar attendees assuming roles that would allow them to examine the questions associated with that year’s topic on a personal basis. TVIW is likewise following a highly interactive workshop strategy, as Doug’s report attests. The photos below come from New York photojournalist Joey O’Loughlin, and are used with permission. 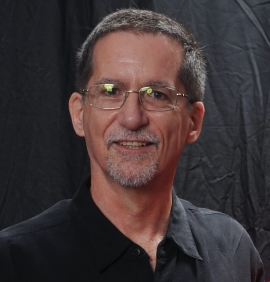 The Tennessee Valley Interstellar Workshop took place from February 28 through March 1 in Chattanooga, Tennessee, a very pleasant place to be. On both Monday and Tuesday the mornings were taken up by multiple plenary talks, primarily on technical topics, with most dealing with propulsion possibilities for interstellar flight.

Two notable exceptions were the talks by General Steven Kwast, commander and president of Air University on Maxwell Air Force Base and by Dr. James Schwartz, professor of philosophy at Wichita State University. Both of these talks seemed to engender some “push-back” from various participants.

General Kwast’s talk was titled, “Invited Remarks Concerning America’s Far Future in Deep Space.” The general talked about what it means to have legal authority to enforce behaviors, and how this might apply in interplanetary as well as interstellar societies. His talk was clearly from an American perspective, which seemed to create some tension in some of the participants. 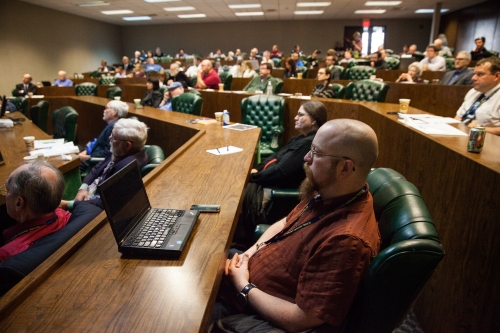 Image: Gathering in Chattanooga, TVIW meets in a plenary session. Science fiction writer Oz Monroe is in the foreground, and Greg and Jim Benford are just visible in the front row. Credit: Joey O’Loughlin.

Dr. Schwartz’s talk was titled, “Conceptual Filters in Space Exploration: Rethinking the Rationale for Planetary Protection.” The questions he posed were all related to the value of keeping extraterrestrial environments pristine, free from exploitation or any use. It is generally assumed that if life is found on an extraterrestrial body, that body should be enjoined from development at least until the life-forms have been studied thoroughly. Dr. Schwartz asked, is life on a body the only reason we should consider enjoining development of that body? Might there be other, non-vital, reasons for doing so? If so, what might these be, and who should decide? The possibility of removing sources of extraterrestrial resources from exploitability for philosophical reasons also created some tension. 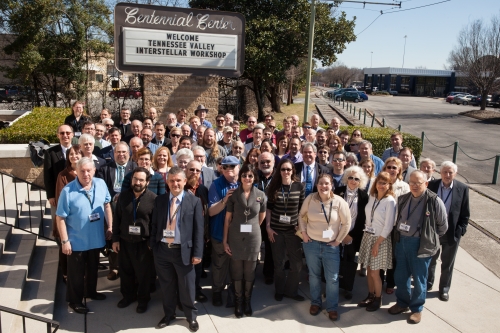 Both of these talks related directly to the Homo Stellaris working track, which was given the task of considering the biological, psychological, and sociological implications of interstellar travel. In our work sessions we made some assumptions to allow us a base to work from. We assumed that we would look at what could and should be done in the next 50-100 years. We further assumed that we were starting from the current technological and sociological baselines.

We asked ourselves what historical analogies might inform our thinking, as a way in which humanity might expand to the stars as a matter of course. The best analogy we thought of was the Polynesian expansion across the Pacific Ocean, where small groups moved from one island to another, stopping to colonize any useful island found and then the population of that island expanding on toward other islands as their island was fully colonized.

We decided that this kind of expansion might be needed in space, since we are not currently able to create a closed biosphere, or even one that will be stable for decades or centuries. The expansion we envisioned would be to habitats gradually further and further from Earth, where the possibility of rescue or large-scale repair/replacement of materials would be less and less possible. As these habitats would be created, we would learn how to improve the biospheres, gradually having them be self-sufficient for very long periods or even indefinitely. 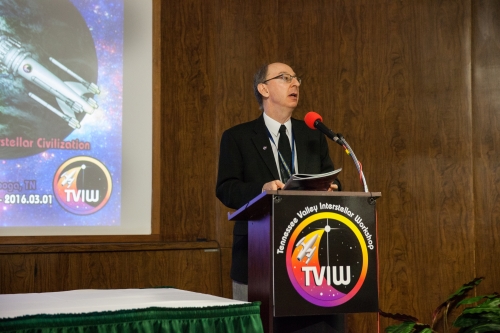 We also decided that it was important to send one or more FOCAL missions out to roughly 550 AU, to use the solar gravitational lensing technique to directly image extra-solar planets that might be prime targets for interstellar colonization. As humans are primarily visual animals, being able to see the planets would provide a much greater possibility of a positive attempt to travel to them [see Catching Up with FOCAL for background].

Finally, within the 50-100 year timeframe we decided that it should be possible to send a one-way exploration mission to a promising extra-solar planet. This mission would be comprised of roughly 100 participants, in long-term suspended animation (we reviewed the current state of the art and it seemed likely that this could be feasible within the timeframe). At any time, from 5-15 participants would be awake and monitoring the ship; the shifts would be perhaps a year long, with membership overlapping so there would be no large-scale transition from one shift to another. 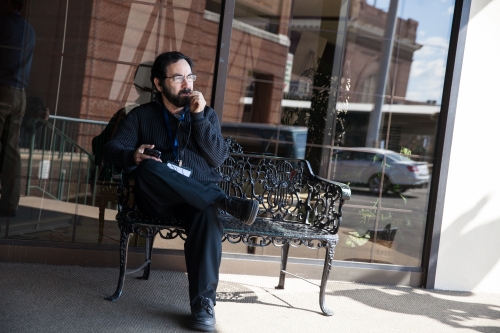 When the ship reached its destination, the participants would set up their habitat, preferably on the planet directly. They would live out their lives exploring the planet and transmitting their discoveries back to Earth. This mission would provide a “proof of concept” for human society, which we hoped would be even more incentive to build and launch a generation ship to colonize the planet. With some luck, the colonization ship would reach the planet before the members of the exploration mission had all died. We did anticipate the exploration mission members would have families to carry on the mission. 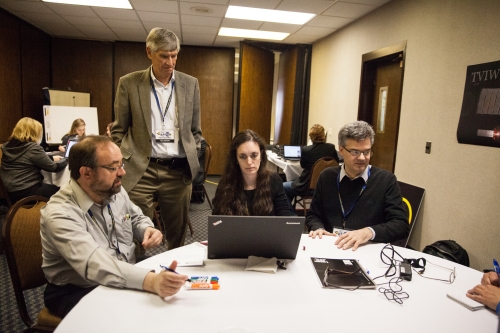 We didn’t extend our thoughts beyond that period, although we did discuss many of the biological, psychological, and sociological pitfalls that might occur.

We saw a robust interplanetary civilization as a prerequisite to any serious interstellar colonization attempts, as the effort to build and launch such a mission seemed very unlikely to be acceptable to any solely terrestrial group, whether commercial, governmental, religious, academic, or any other type. 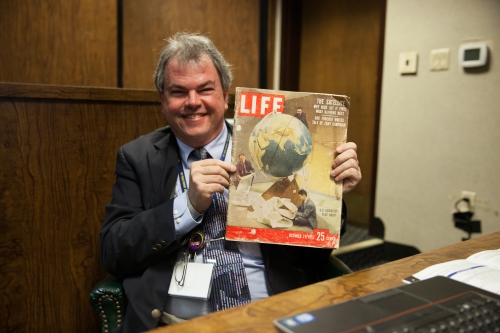 There was little coordination or cross-fertilization among the working tracks, so the other groups (Worldship, Space Solar Power, and Space Mining) were quite likely starting from different assumptions than Homo Stellaris was using. This was unfortunate but probably unavoidable given the short period of time available. 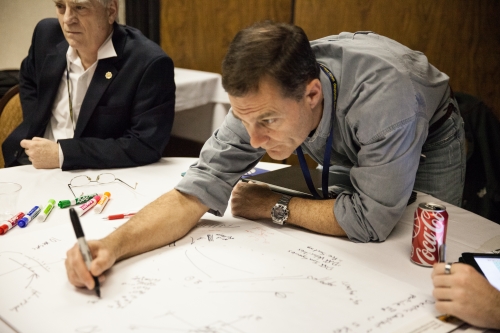 Overall, the workshop was very enjoyable and provided some valuable discussions on just how interstellar travel might be promoted, developed and substantiated in the real world and the reasonably near future. We look forward to the next Tennessee Valley Interstellar Workshop in 2017!