Marc Millis is once again in the media, this time interviewed by a BBC crew in a show about controlling gravity. The impetus is an undertaking I described in the first chapter of Frontiers of Propulsion Science, Project Greenglow. The former head of NASA’s Breakthrough Propulsion Physics project and founding architect of the Tau Zero Foundation, as well as co-editor with Eric Davis of the aforesaid book, Millis has some thoughts on how we discuss these matters in the media, and offers clarifications on how work on futuristic technologies should proceed. 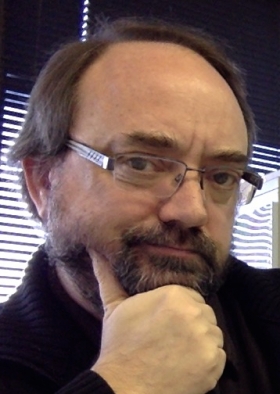 A BBC ‘Horizons’ episode will air next Wednesday, March 23 (8pm UK) about the Quest for Gravity Control. The show features, among other things, an interview with myself about my related work during NASA’s Breakthrough Propulsion Physics project and thereafter with the Tau Zero Foundation. Quoting from an advertisement for the show, Project Greenglow – The Quest for Gravity Control:

This is the story of an extraordinary scientific adventure – the attempt to control gravity. For centuries, the precise workings of gravity have confounded the greatest scientific minds – from Newton to Faraday and Einstein – and the idea of controlling gravity has been seen as little more than a fanciful dream. Yet in the mid 1990s, UK defence manufacturer BAE Systems began a ground-breaking project, code-named Greenglow, which set about turning science fiction into reality. On the other side of the Atlantic, NASA was simultaneously running its own Breakthrough Propulsion Physics Project. It was concerned with potential space applications of new physics, including concepts like ‘faster-than-light travel’ and ‘warp drives’.

With such a provocative topic, it can be difficult to extract the realities between the more entertaining extremes of delusional crackpots and pedantic prudes. We’ve not yet seen the episode to know what is, or is not, covered. For those interested in the more substantive realities – at least to the level of our own perceptions – here is a short status report.

First, there are several lines of inquiry in general physics. This includes Einstein’s theory, which describes gravity in terms of warped spacetime; high-energy particle experiments that explore the unification of all the fundamental forces at higher energies; and cosmological observations on the role of gravitation and quantum phenomena on the formation of the universe. Such investigations are aimed at understanding nature for its own sake, rather than for the ambition of controlling gravitation.

One example of applying this knowledge to the challenge of controlling gravity goes back to the early 1960’s with Robert L. Forward’s “Dipole Gravitational Field Generator ” (Am. J. Phys., Vol. 31, 1963, pp. 166-170). In this and subsequent works by others, it has been shown that spacetime can be warped to produce “designer” gravitational fields. Such warps require enormous energy densities and/or stresses/pressures of either moving matter, extreme electromagnetic fields, or specially modified quantum vacuum energy. This has not yet led to any practicable devices.

When one shifts the focus from general physics to a utilitarian challenge (say, controlling gravitation for propulsion or for zero-gravity recreational rooms), two important points come into play:

In 2009, Eric Davis and myself, working with over a dozen contributing authors, compiled a book about the various approaches for controlling gravitation and faster-than-light flight. By contrasting the make-or-break issues of these goals with known physics, the book identifies where next to concentrate research. It is still too soon to know if such breakthroughs will ever be achievable, but such application-specific research can now commence. Chapters 3 through 13 cover the topic of controlling gravity for space drives, while chapters 14 through 16 address faster-than-light flight:

Subsequent condensations have been published as:

– M. G. Millis (2012), “Space Drive Physics, Introduction & Next Steps,” JBIS, Vol. 65, pp. 264-277. From this, it appears that the next line of inquiry deals with the nature of inertial frames. Inertial frames are the reference frames upon which the laws of motion and the conservation laws are defined, yet it is still unknown what causes inertial frames to exist and if they have any deeper properties that might prove useful.

– E. W. Davis (2013), “Faster-Than-Light Space Warps, Status and Next Steps,” JBIS, Vol. 66, pp. 68-84. From this, it appears that the next lines of inquiry deal with the structure of the quantum vacuum in the context of warped spacetime. This includes closer examinations of the technological approaches to affect the quantum vacuum that might produce space warps.

While general physics has been making incremental progress to our understanding of gravitation, the other fundamental forces, and spacetime for centuries, research aimed at controlling gravitation for practical purposes is still in its infancy. In addition to the challenges of deciphering nature, the desire for a positive result makes it difficult to conduct the research with the impartiality needed to produce rigorous results. With a healthy blend of imagination, skepticism, and reason, progress will be made. One never knows how a media project will turn out, but my hope is that “Project Greenglow – The Quest for Gravity Control” will reflect these values.