Planets in the Process of Formation

Back in 2014, astronomers used the Atacama Large Millimeter/submillimeter Array (ALMA) to produce high-resolution images of the planet-forming disk around the Sun-like star HL Tau, about 450 light years away in the constellation Taurus. The images were striking, showing bright and dark rings with gaps, suggesting a protoplanetary disk. Scientists believed the gaps in the disk were caused by planets sweeping out their orbits.

All this was apparent confirmation of planet formation theories, but also a bit of a surprise given the age of the star, a scant million years, making this a young system indeed. Here is the ALMA image, along with the caption that ran with the original release of the story from NRAO. 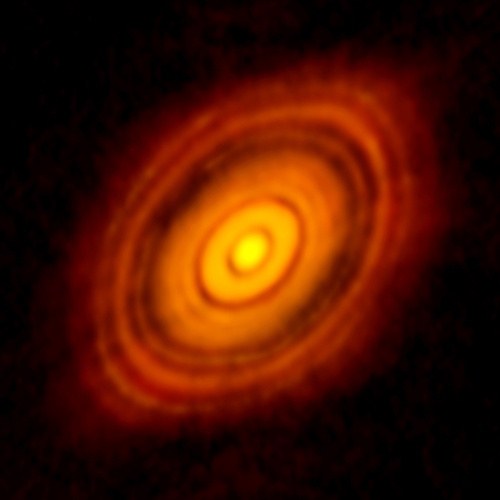 Image: The young star HL Tau and its protoplanetary disk. This image of planet formation reveals multiple rings and gaps that herald the presence of emerging planets as they sweep their orbits clear of dust and gas. Credit: ALMA (NRAO/ESO/NAOJ); C. Brogan, B. Saxton (NRAO/AUI/NSF).

What we see is what this NRAO news release calls ‘a distinct clump of dust’ in the inner disk region, one that contains from 3 to 8 times the mass of the Earth. The researchers believe they are looking at the earliest stage in the formation of protoplanets, seen in the image below for the first time. Not a ‘planet,’ mind you, but a ‘clump of dust.’ 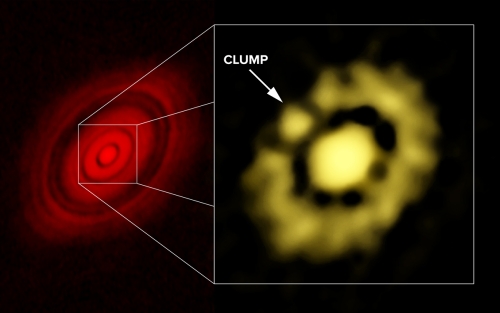 “This is an important discovery, because we have not yet been able to observe most stages in the process of planet formation,” said Carlos Carrasco-Gonzalez from the Institute of Radio Astronomy and Astrophysics (IRyA) of the National Autonomous University of Mexico (UNAM). “This is quite different from the case of star formation, where, in different objects, we have seen stars in different stages of their life cycle. With planets, we haven’t been so fortunate, so getting a look at this very early stage in planet formation is extremely valuable,” he added.

The inner region of the disk, thought to contain grains as large as one centimeter in diameter, is where Earth-like planets would be likely to form as aggregations of dust accumulate and draw in material, eventually gathering the mass to form the planetesimals that become planets. The paper on the VLA work argues that we are looking not at planets that have already formed in gaps in the dusty disk, but at the very earliest stages of future planet formation:

We propose a scenario in which the HL Tau disk may have not formed planets yet, but rather is in an initial stage of planet formation. Instead of being caused by (proto)planets, the dense rings could have been formed by an alternative mechanism. Our 7.0 mm data suggest that the inner rings are very dense and massive, and then, they can be gravitationally unstable and fragment. It is then possible that the formation of these rings result in the formation of dense clumps within them like the one possibly detected in our 7.0 mm image. These clumps are very likely to grow in mass by accreting from their surroundings, and then they possibly represent the earliest stages of protoplanets. In this scenario, the concentric holes observed by ALMA and VLA would not be interpreted as a consequence of the presence of massive (proto)planets. Instead, planets may be just starting to form in the bright dense rings of the HL Tau disk.

The following image pulls the ALMA and VLA work together. 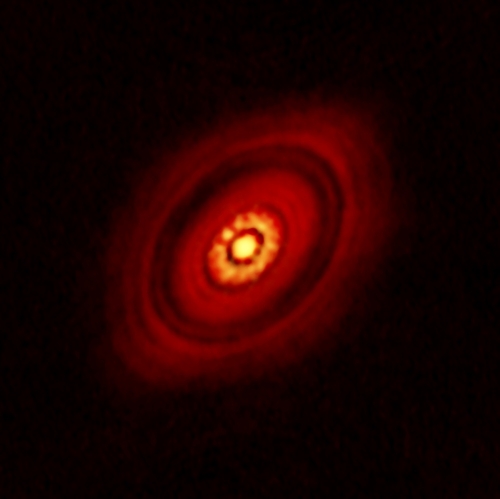