Of a Mountain on Titan

If Saturn’s inner moons are, as we discussed yesterday, as ‘young’ as the Cretaceous, then we have much to think about in terms of possible astrobiology there. But Titan is unaffected by the model put forward by Drs. Ćuk, Dones and Nesvorný, being beyond the range of these complex interactions. Huge, possessed of fascinating weather patterns within a dense atmosphere, Titan probably dates back to Saturn’s earliest days, in some ways a frigid ‘early Earth’ analog.

When my son Miles was a boy, we drove through the Appalachians on a journey that eventually took us into Canada. Somewhere in the Shenandoah Valley he commented on how insignificant the mountains seemed compared to what he was used to out west, where the Rockies dominate the sky. True enough, but of course the Smokies and the Cumberlands have their own tale to tell. Once monumental, they’ve fallen prey to wind and rain, ancient relics of once grander peaks.

The latest work on Titan from Cassini data now reveals something about similar erosion on Titan, where we have rain, lakes and seas, not to mention rivers cutting their way through the landscape. But Jani Radebaugh (Brigham Young University, Utah), who works with the Cassini radar team, notes that erosion on Titan is actually a much slower process than on Earth, thanks to Titan’s being ten times Earth’s distance from the Sun. There is just that much less energy to drive these processes in the thick atmosphere. See this JPL news release for more.

With Titan we have to think in terms of analogies. On Earth it’s water that freezes, thaws, vaporizes, providing a hydrological cycle that works its seasonal magic in terms of weather change. On Titan it’s methane that performs a similar function. Meanwhile, Titan’s water ice behaves much more like rock on Earth, an icy crust overlaying what is likely to be an ocean of liquid water — here the analogy is with Earth’s upper mantle. In both cases, these inner layers accommodate slow changes as mountains form and ranges begin to settle.

Radebaugh’s team used Cassini’s radar instrument to study the ridges known as the Mithrim Montes, among which is found the moon’s tallest peak, some 3337 meters high. “It’s not only the highest point we’ve found so far on Titan, but we think it’s the highest point we’re likely to find,” says Stephen Wall (JPL), deputy lead of the Cassini radar team. The results were presented at the 47th Lunar and Planetary Science Conference in Texas. 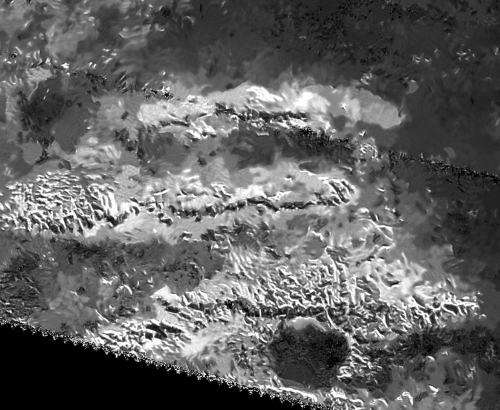 Image: The trio of ridges on Titan known as Mithrim Montes is home to the hazy Saturnian moon’s tallest peak. The mountain, which has an elevation of 3,337 meters, is located midway along the lower of the three ridges shown in this radar image from NASA’s Cassini spacecraft. Credit: NASA/JPL-Caltech/ASI.

The view above was acquired on the T-43 flyby back on May 12, 2008 at an incidence angle of about 34 degrees. Remember that this is a radar image, which uses reflections scattered off the moon’s surface to see through the thick, opaque atmosphere. Dark areas indicate regions that are relatively smooth or otherwise absorb radar waves, while bright regions are rougher materials that scatter the beam. A ‘speckle’ pattern is an artifact of the technique — in this image, ‘despeckling’ methods were used to reduce the noise and produce clearer views.

Titan’s mountains don’t reach the heights we see in some of Earth’s ranges, but researchers hadn’t expected they would because the water-ice bedrock is softer than Earth’s rock. But it is significant that we find tall mountains here, an indication of active forces shaping the surface that are perhaps Titan’s response to tidal forces from Saturn, or perhaps cooling of the crust. Finding such ‘active zones’ in the crust tells us something about Titan’s history.

“As explorers, we’re motivated to find the highest or deepest places, partly because it’s exciting,” adds Radebaugh. “But Titan’s extremes also tell us important things about forces affecting its evolution. There is lot of value in examining the topography of Titan in a broad, global sense, since it tells us about forces acting on the surface from below as well as above.”

Titan’s highest mountains all seem to be close to the equator, with other peaks of a similar height being found within the Mithrim Montes (for Tolkien cognoscenti, the Mountains of Mithrim ran northwest from the Ered Engrin, dividing Dor-lómin from Mithrim, and that is as far as I go with Tolkien today). Other peaks are known in the Xanadu region. Learning more about the forces that formed them is now a priority for researchers probing Titan’s mysteries.