Our second report from the recent Tennessee Valley Interstellar Workshop is the work of Cassidy Cobbs and Michel Lamontagne, with an emphasis on the worldship track. Cassidy has an MS from Vanderbilt, where she studied ecology and evolution. She currently works at Memorial Sloan Kettering Cancer Center, doing traditional and next-generation gene and genome sequencing. Her interest in space travel/engineering was enhanced by attending Advanced Space Academy in Huntsville at age 14. Michel Lamontagne is a French-Canadian mechanical engineer, practicing in the fields of heat transfer and ventilation, with a passion for space. An active member of Icarus Interstellar, he tells me he has “been designing spaceships since he was 12 years old, and waiting for reality to catch up!” Photos throughout are from New York photojournalist Joey O’Loughlin, and are used with permission.

By Cassidy Cobbs and Michel Lamontagne 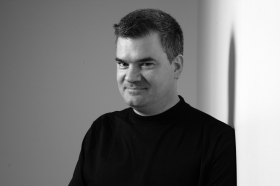 This year’s Tennessee Valley Interstellar Workshop (TVIW-2016) was held in Chattanooga, Tennessee from February 28 to March 2. Attendance was good, reaching the limits determined by the organization committee. Everything seemed to run smoothly, although one can imagine the usual frantic behind the scenes activity required to create that illusion!

The Life Systems Engineering for the Worldship track was very productive, engaging in active work sessions and managing to start interesting lines of inquiry into some the questions of the biological, social, and heat transfer facets of the worldship concept.

In our first working track session, we split into two groups, designated “Biotic” and “Abiotic” to brainstorm on some of the unanswered questions of Worldship theory and design. 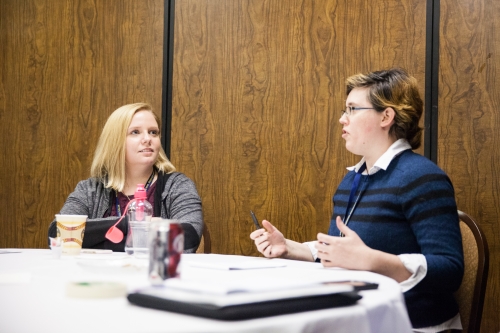 Image: Abigail Sheriff (left), a graduate of the International Space University, and Cassidy Cobbs, co-leader of the Worldship track.

We began populating a whimsical list of included and excluded species, sure to generate heated debate — for example, the entire Australian continent was excluded on account of being too deadly!

We also came up with a number of unexplored questions, including three concerns that we would explore in depth in our Day 2 session: The agricultural framework of a Worldship; how to establish and maintain indefinitely carbon, nitrogen, phosphorus, and oxygen cycling; and how to adapt Earth-normal light, water, and heat cycles to a (much smaller) Worldship.

Cameron Smith (Portland State University) added his ongoing reflections about the human societal aspects of the worldship to the discussions, and provided fascinating parallels with early villages and paleolithic societies, where proto-cities housed small stable communities for periods similar to those expected for a worldship trip. 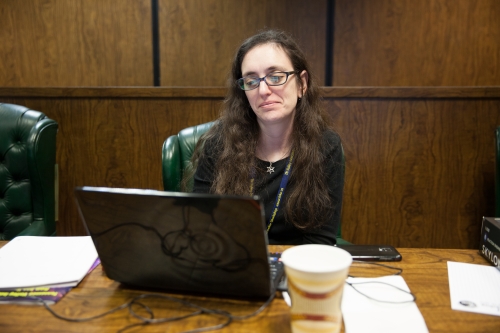 In our second session, the track split into three groups to look at a few of the questions generated the day before.

Our first group decided to explore some of the changes in heat transfer regimes from living on a sphere with the heat from the outside to living in a cylinder with heat from the inside. We didn’t have the time to work out if we could make it rain in the worldship using only convection cycles, but we agreed that rain would be needed and decided to address the problem in follow-up work sessions on the Internet.

Group two looked at resource cycling, and began to develop the calculations necessary to determine how much of elements such as nitrogen, phosphorus, and oxygen would be needed on board the ship at launch to maintain those natural cycles. 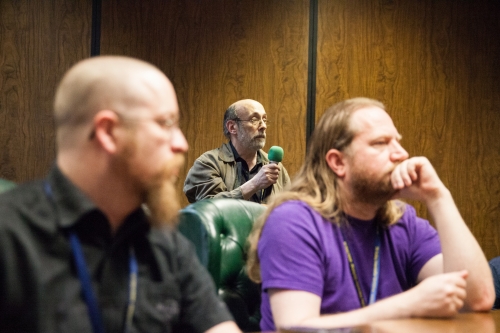 The final group explored a potential framework for agri- and aquaculture, creating a list of diverse livestock and crops that would fulfill the nutritional and cultural needs of the humans on board. They also began to think about issues of crop rotation, soil health, and water requirements and to calculate what percentage of land would need to be allocated to agriculture.

The Worldship track was proud to host a new generation of designers, with Hannah Sparkes (age 15) and Ashleigh Hughes (age 17) joining with researchers Anton Smirnov (28) and Andrew Kirkpatrick (26) to ensure that analysis of interstellar worldship engineering has a future. 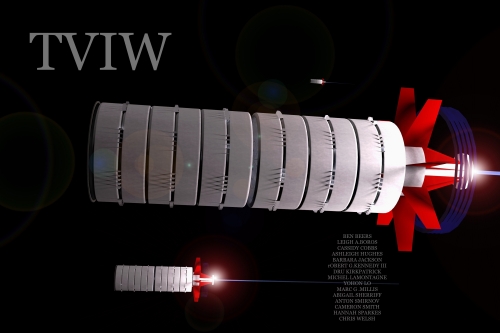 Image: A poster for the worldship track, as prepared by Michel Lamontagne.

For the plenary events, the subjects covered in the papers and talks ranged widely, as usual for TVIW, from starwisps to space wars. Philip Lubin (UC-Santa Barbara) invited the crowd to do the math for his incarnation of the laser-powered sail, one that recently garnered a lot of media attention with a ‘30 minutes to Mars’ thought experiment, although the Mars journey is actually only one element of what Lubin sees as a complete Roadmap to the Stars. 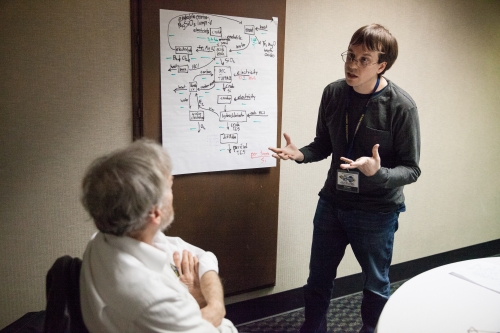 The Moon vs asteroid mining debate politely raged on, with proponents on both sides and an entire track devoted to exploring detailed mineral processing methods. Melting Lunar basalts to create large caverns for rotating habitats, both in system and at interstellar destinations, was also the subject of an interesting talk by Ken Roy. Meanwhile, the sheer immensity of asteroid resources was highlighted by John Lewis in his keynote address. 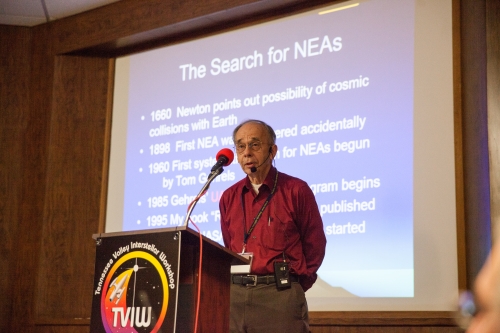 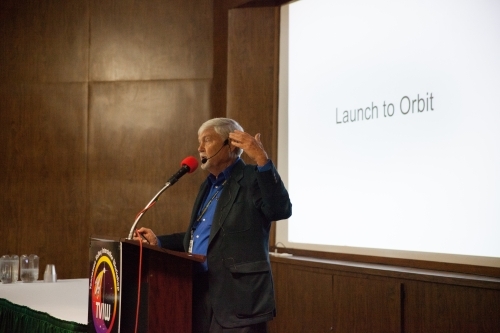 Al Jackson revisited and augmented his seminal Interstellar Laser Powered Interstellar Ramjet design, applying graphene to increase performance and setting the ultimate physical limits of the technology. Creating antimatter from space vacuum fluctuations using high energy lasers, as a part of an advanced antimatter drive, while respecting classical conservation of energy, was the subject of the exotic physics talk by Gerald Cleaver. 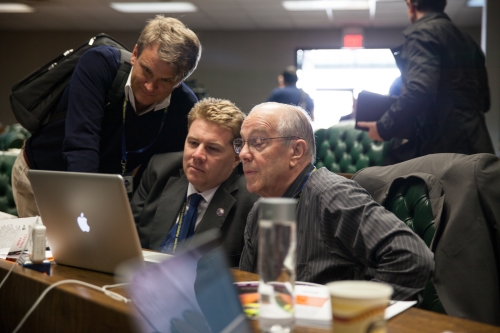 Image: Stefan Zeidler (left), newest member of the board of the Initiative for Interstellar Studies, with i4IS founder Kelvin Long and Bill Cress. Credit: Joey O’Loughlin.