Some of you may recall an episode of Star Trek: The Next Generation in which the inhabitants of a planet called Aldea use a planetary defense system that includes a cloaking device. The episode, “When the Bough Breaks,” at one point shows the view from the Enterprise’s screens as the entire planet swims into view. My vague recollection of that show was triggered by the paper we looked at yesterday, in which David Kipping and Alex Teachey discuss transit light curves and the ability of a civilization to alter them.

After all, if an extraterrestrial culture would prefer not to be seen, a natural thought would be to conceal its transits from worlds that should be able to detect them along the plane of the ecliptic. Light curves could be manipulated by lasers, and as we saw yesterday, the method could serve either to enhance a transit, thus creating a form of METI signaling, or to conceal one. In the latter case, the civilization would want to create a change in brightness that would essentially cancel out the transit light curve. It’s not exactly a ‘cloaking device,’ but it ought to work. 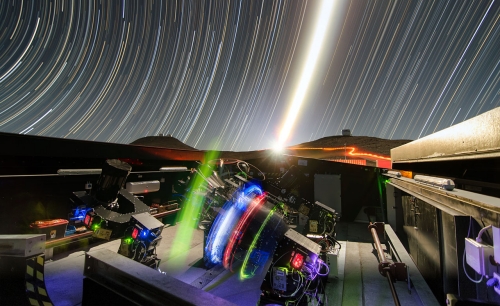 A Galaxy of Xenophobes?

As I said yesterday, I’m not here to reignite the METI debate as much as to acknowledge that what an alien culture might do is unknown. Rather than asking whether any civilization should try to conceal itself, let’s simply ask what it could do if it made the attempt.

The idea has a brief history, with Eric Korpela (UC-Berkeley) and Shauna Sallmen (University of Wisconsin-La Crosse) suggesting in 2015 that ETI could effectively hide a planetary signature through the use of orbiting mirrors. This would, like the geometric masks envisioned by Luc Arnold, require engineering on a huge scale, and would also demand elaborate tuning for each target. Kipping and Teachey argue for a more affordable alternative using a directed laser beam:

In our scheme… the advanced civilization emits a laser directed towards the other planetary system at precisely the instant when the other system would be able to observe a transit. The power profile of the laser would need to be the inverse of the expected transit profile, leading to a nullified flat line eliminating the transit signature. 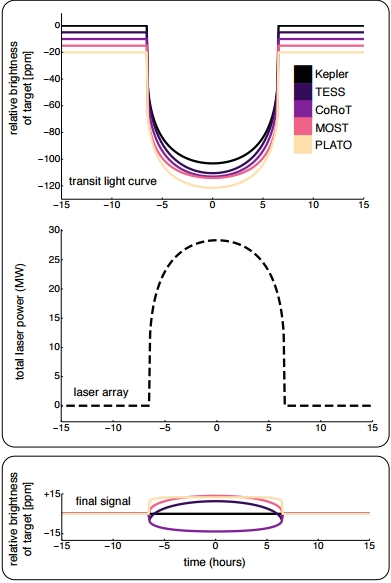 Image: Top: The unaltered light curve of the Earth transiting the Sun, as viewed by different broadband optical photometers (offset by 5 ppm). Middle: The power profile of a 600 nm laser array designed to cloak the Earth. An array of lasers producing a peak power of ∼ 30 MW over 13 hours nullifies the transit. Bottom: Residual light curve, as seen by the different photometers. Credit: David Kipping/Alex Teachey.

The Kepler mission has produced the vast majority of recent exoplanet discoveries, and we have upcoming transit surveys in the works including TESS (Transiting Exoplanet Survey Satellite), PLATO (PLAnetary Transits and Oscillations of stars) and NGTS (Next-Generation Transit Survey). If a civilization wanted to shield itself from this kind of broadband optical survey, a monochromatic optical laser should do the trick. The paper estimates that the Earth could be ‘cloaked’ — hidden from view from a particular star system by having its transit nullified — with a 600 nm laser array emitting a peak power of ~30 MW over 13 hours.

The power requirements are interesting because they are relatively low for a specific target, but the paper adds the obvious point that if we are trying to cloak a planet from a large number of targets, we would require larger power production. Nonetheless, we routinely use much larger numbers when talking about laser lightsails in the configurations that could enable interstellar flight. Kipping and Teachey point out that for a culture that develops those kinds of technologies, cloaking could become a secondary function of the laser arrays used primarily for propulsion.

Chromatic cloaking (across all wavelengths) could be achieved by using a large number of beams (although with an order of magnitude higher energy cost), while tunable (‘supercontinuum’) lasers may emerge that can simulate any spectrum. But even with these capabilities, is cloaking an entire planet the most efficient choice for a civilization trying to hide itself? Perhaps a better course from the standpoint of economics and efficiency is to cloak the biosignatures that announce life’s presence. Let me quote from the paper on this:

It is straightforward to use a chromatic laser array to cancel out the absorption features in the planet’s transmission spectrum, assuming laser emission can be produced at any desired wavelength. Indeed, the presence of an atmosphere could be cloaked altogether if the effective height changes of the planet as a function of wavelength are canceled out by lasers. The planet might then resemble a dead world totally devoid of any atmosphere and appear almost certainly hostile to life. Not only would this approach require a significantly smaller power output, it would also have the benefit of producing self-consistent observations insomuch as the presence of the planet might still be inferred by other means (i.e. through radial velocity analysis).

What SETI Can Learn

Kipping and Teachey refer to these methods as a ‘biocloak,’ and suggest that cloaking can be selective indeed, perhaps focusing on the absorption features of molecular hydrogen and ozone. In this case we are dealing with peak laser power of just ∼160 kW per transit. But the authors are clear about the limitations of these methods. Radial velocity methods can find a planet otherwise hidden by a chromatic transit cloak, and given technologies not so far advanced over what we have today, direct imaging can reveal atmospheric features of a planet even when a ‘biocloak’ is in place. “For these reasons” write the authors, “perhaps the most effective use of laser enabled transit distortion would be for broadcasting rather than cloaking.”

And it was on that note that I began yesterday’s look at these possibilities. If we have based fifty years-plus of SETI on the notion that another civilization may choose to contact us, we have to acknowledge what Kipping and Teachey make clear: There are ways to alter transit signatures that make it obvious we are dealing with an advanced technology. And you can make the argument, as the authors do, that transits offer a different kind of ‘water hole’ for SETI, comparable in its own way to the ‘water hole’ frequencies we monitor in radio SETI.

Thus while the cloaking aspects of this paper have received the most attention, I think the SETI implications are its strongest takeaway. It is a very short step from existing optical SETI to archival searches of transit signatures already in our files. Knowing what these signatures would look like is a step forward as we continue to probe for civilizations around nearby stars.

Addendum: This email from Dr. Kipping, excerpted below, further explains the authors’ thinking about cloaking possibilities:

…we never intended to solve cloaking from all detection methods in one paper (that would be a tall order to demand of any research paper). Rather, we started with the simplest and most successful technique, transits, and showed that it is energetically and technologically quite feasible for even our current level of technology to build an effective cloak. Whilst we acknowledge that there are ways to defeat the proposed cloak (e.g. polarization of laser beams, direct imaging), we see these as problems which are likely to be solved by more advanced civilizations than ourselves, or indeed in future work (by humans!). What we are trying to do on the cloaking side is stimulate a conversation- that it is surprisingly easy to hide planets. Given that many notable scientists are opposed to METI, it is not unreasonable that other civilizations may choose to do this. The scenario could be that they would have long ago observed the Earth as an inhabited planet, and then turned on a cloak as a insurance policy, buying them time to reveal their presence when they choose to, rather than our increasingly penetrating telescopes finding them before they wish.

The paper is Kipping and Teachey, “A Cloaking Device for Transiting Planets,” accepted at Monthly Notices of the Royal Astronomical Society (preprint), The Korpela and Sallmen paper is “Modeling Indications of Technology in Planetary Transit Light Curves – Dark Side Illumination,” Astrophysical Journal Vol. 809, No. 2 (abstract).