The Breakthrough Initiatives conference I’ve just returned from, called Breakthrough Discuss 2016, had been a bit of a puzzle going in. Still bleary after an early morning arrival in Palo Alto, I was looking forward to getting to the Stanford campus for the first sessions the next day. Breakfasting at a small cafe near the hotel, I mulled over the possibilities. The emphasis was on astronomy, given the list of attendees, which included top names in the exoplanet hunt, but of course Breakthrough Initiatives is also funding a major SETI effort, so that would be a theme. And then there was the looming presence of the just announced Breakthrough Starshot.

Balancing all this out looked to be a challenge, but as it turned out, there was a strong cross-pollination among the various themes, with the Starshot — an unmanned flyby of Alpha Centauri and an infrastructure to sustain a further interstellar effort — woven into the proceedings. I knew I’d come back with material for a week’s worth of Centauri Dreams posts, but the level of presentations was so high and the insights so numerous that I’m thinking we’ll be talking about this meeting for some time to come. The challenge for me will be to weave ongoing news items into the background narrative the conference provides. 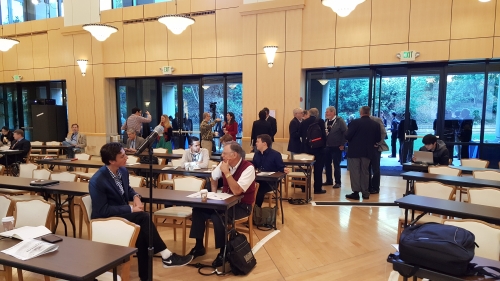 The overall themes we would be dealing with were announced early. Jill Tarter was in charge of the SETI component, which focused on optical SETI and the detectability of directed energy systems, although in dealing with these issues you naturally get into broad questions of SETI strategy. Olivier Guyon, a coronagraph specialist who leads the Subaru Coronagraphic Extreme Adaptive Optics effort, led the sessions on exoplanet detection, which focused tightly on Alpha Centauri. Harvard’s Avi Loeb chaired the session on the Sun as a gravitational lens and gave a rousing conference keynote, one I’ll want to talk about in some detail later.

The gravitational lens was of particular interest to me. I ran into Claudio Maccone while checking into the hotel and we talked about the emphasis on a gravitational lens mission that was built into the program. Having championed the mission he’s been calling FOCAL for many years now, Claudio was clearly pleased at the attention the concept is now receiving. We’ve been talking about a FOCAL mission for years on this site with the assumption that it would involve a decades-long journey to the Sun’s gravitational focus, which begins at about 527 AU and for various reasons is best used a bit further out (more on this later). But now we’re talking about Breakthrough Starshot, a mission that could get to the focus in a matter of days. 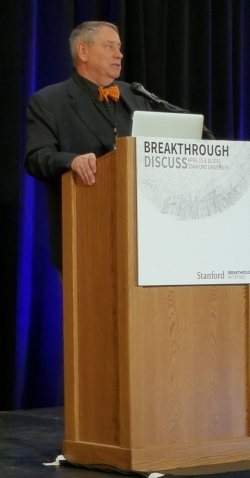 Let’s back up a moment. The Breakthrough Starshot Concept uses the beamed power of a massive phased laser array to drive small sails to one-fifth of the speed of light in mere minutes. That gets you to Alpha Centauri in about twenty years, a mission time that compares suitably with other lengthy missions already in our portfolio, most especially Voyager. If we built the infrastructure to make this happen and solved the innumerable details that make it so difficult, we could get payloads to the gravity focus not only to conduct surveillance on our first target star, Alpha Centauri, but also to operate as a communications bridge between the Earth and Centauri A and B. Because as we’ll see, even a tiny transmitter can be detected at interstellar distances when you’re taking advantage of the massive magnifications at the gravity focus.

Image: Pete Worden, executive director of Breakthrough Initiatives, discussing the goals of the conference as it begins.

Thus FOCAL suddenly becomes a mission enabling technology in its own right, with not only a huge scientific payout but an engineering application for sails we might send out within a generation. But can we send them? At the Yuri’s Night festivities held at Yuri Milner’s estate, core Breakthrough Starshot participants discussed the mission and did a Q&A session with the audience, led by Milner himself. I’ll have more on all this as this series of reports continues, but for now, realize that a key part of the presentation was a list of 19 challenges the concept must overcome. How to build the beamer itself. How to power it up. How to ensure sails are not blown off its beam. How to get data back to the Earth. How to cope with interstellar dust.

As became evident in the discussion both at the Yuri’s Night party and during the conference at Stanford, no one is taking these problems lightly. The $100 million that Milner has put forward toward Breakthrough Starshot is to be used to dig into these key questions, to stress the concept to the breaking point, identify its weaknesses and learn how to resolve them. Will there be a genuine show-stopper somewhere in this investigation? At this point we can’t know, but we’ll have the research funding now to identify them if they are there. And as we are talking in generational terms, we’ll also identify the trends that may make the improbable possible. 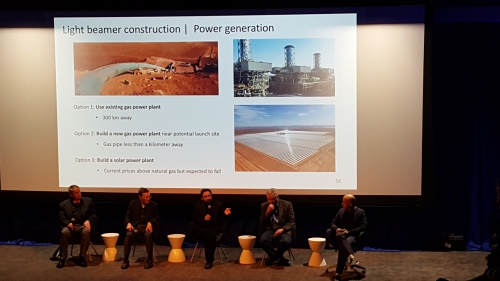 Image: Discussing Breakthrough Starshot with the audience during the Yuri’s Night celebration.

I have many thoughts on all this, but tomorrow we’ll start digging into the conference proceedings to see how Alpha Centauri shapes up as a target. As the nearest stars, Centauri A and B are irresistible targets, two stars each capable of hosting habitable planets, not to mention planetary possibilities around Proxima. But how much do we know about the system, and what are our next steps as we try to find out whether interesting planets are actually there? These issues and FOCAL’s contribution to an interstellar mission will take up much of the week. And that leaves us with optical SETI to examine by week’s end and the implications of beamed energy. If we use beamed power to propel spacecraft, can we detect others who do so?