Beneath a Methane Sea

Back when Cassini was approaching Saturn and we all anticipated the arrival of the Huygens payload on the surface, speculation grew that rather than finding a solid surface, Huygens might ‘splash down’ in a hydrocarbon sea. I can remember art to that effect in various Internet venues of the time. In the event, Huygens came down on hard terrain, but since then Cassini’s continuing surveys have shown that seas and lakes do exist on the moon. Over 1.6 million square kilometers (about two percent of the surface of Titan) are covered in liquid. 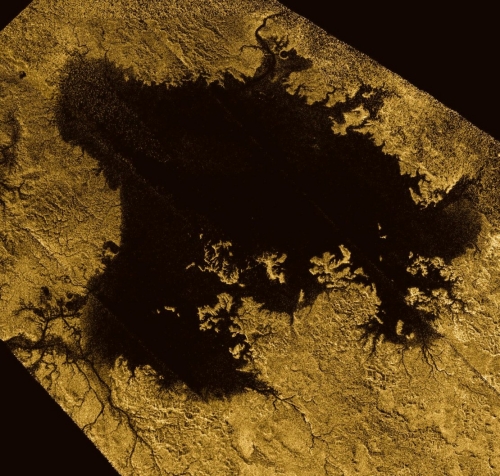 Image: Ligeia Mare, shown here in a false-colour image from the international Cassini mission, is the second largest known body of liquid on Saturn’s moon Titan. It measures roughly 420 km x 350 km and its shorelines extend for over 3,000 km. It is filled with liquid methane. The mosaic shown here is composed from synthetic aperture radar images from flybys between February 2006 and April 2007. Credit: NASA/JPL-Caltech/ASI/Cornell.

The liquid, of course, is not water but methane and ethane, existing in an atmosphere that is almost 95 percent nitrogen (with methane, small amounts of hydrogen and ethane making up the rest). Cassini has shown us three large seas near the north pole that are surrounded by numerous smaller lakes, while only a single lake has thus far been found in the southern hemisphere. New work on Cassini flyby data between 2007 and 2015 now confirms that Ligeia Mare, one of Titan’s largest seas, is made up primarily of liquid methane.

Image: A radar image of Titan’s north polar regions (centre), with close ups of numerous lakes (left) and a large sea (right). The sea, Ligeia Mare, measures roughly 420 x 350 km and is the second largest known body of liquid hydrocarbons on Titan. Its shorelines extend for some 2000 km and many rivers can be seen draining into the sea. By contrast, the numerous lakes are typically less than 100 km across and have more rounded shapes with steep sides. Credit: NASA/JPL-Caltech/ASI/USGS; left and right: NASA/ESA. Acknowledgement: T. Cornet, ESA.

“Either Ligeia Mare is replenished by fresh methane rainfall, or something is removing ethane from it. It is possible that the ethane ends up in the undersea crust, or that it somehow flows into the adjacent sea, Kraken Mare, but that will require further investigation.”

As this work progressed, Le Gall and team relied on a radio sounding experiment performed in 2013, described in this ESA news release. The radio sounding, led by Marco Mastrogiuseppe, detected seafloor echoes and was able to derive the depth of Ligeia Mare along Cassini’s track, which marked the first time we have ever detected the bottom of an off-Earth sea. The deepest depth recorded was 160 meters. Le Gall used the sounding data along with observations of thermal emissions from Ligeia Mare at microwave wavelengths in her work.

The result: The new paper reports that the researchers were able to separate the thermal emissions from the seafloor from those of the liquid sea. The seabed is found to be covered by what Le Gall calls “a sludge layer of organic-rich compounds.” 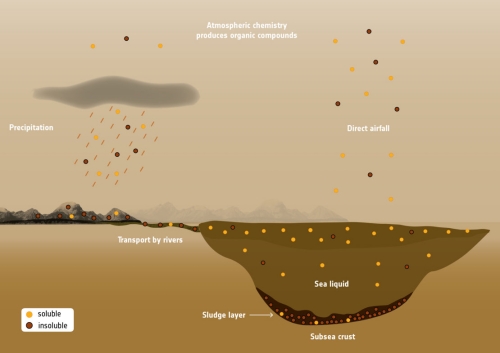 Image: How different organic compounds make their way to the seas and lakes on Titan, the largest moon of Saturn. A recent study revealed that Ligeia Mare, one of Titan’s three seas, consists of pure methane and has a seabed covered by sludge of organic-rich material. Credit: ESA.

You can see the process at work in the image above. Nitrogen and methane in Titan’s atmosphere produce organic molecules, the heaviest of which fall to the surface. Reaching the sea through rain or one of Titan’s rivers, some are dissolved, while others sink to the ocean floor. We also find that the surface areas surrounding the lakes and seas are likely flooded with liquid hydrocarbons, based on the lack of temperature change between the sea and the shore.