The star YLW 16B, about 400 light years from the Earth, has roughly the same mass as the Sun. But unlike the Sun, a mature 4.6 billion year old star, YLW 16B is a scant million years old, a variable of the class known as T Tauri stars. Whereas our star is relatively stable in terms of radiation emission, the younger star shows readily detectable changes in radiation, a fact that astronomers have now used in combining data from the Spitzer space telescope with four ground-based instruments to learn more about the dimensions of its protoplanetary disk. 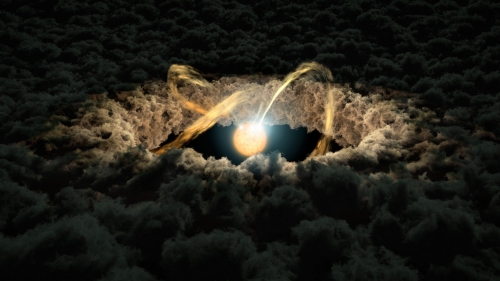 Image: This illustration shows a star surrounded by a protoplanetary disk. Material from the thick disk flows along the star’s magnetic field lines and is deposited onto the star’s surface. When material hits the star, it lights up brightly. Credit: NASA/JPL-Caltech.

The method is called photo reverberation, and it takes advantage of the fact that when the star brightens as material from the turbulent disk falls onto its surface, some of the emitted light strikes the disk. The result is what is known as a ‘light echo,’ a delayed flash that can be used to measure how far the star is from the inner edge of the surrounding disk.

The time lag between the stellar emissions and their ‘echoes’ is what is in play here. Over the course of a two-night observing period, the researchers found consistent time lags between emissions and echoes. On the ground, the Mayall telescope at Kitt Peak (Arizona), the Harold L. Johnson telescope in Mexico and the SOAR and SMARTS telescopes in Chile could measure shorter-wavelength infrared wavelengths — these emissions came from the star. Spitzer, meanwhile, measured longer-wavelength light from the disk’s echo. From the paper:

Near-simultaneous time-series photometric observations were conducted on April 20, 22, and 24, 2010, with four ground-based telescopes operating in H and K bands and the Spitzer Space Telescope observing at 4.5 µm. Each session of Spitzer staring mode monitoring lasted ∼8 hours. One (YLW 16B) out of twenty-seven sources detected was found to have mutually correlated hourly variations in all three wavebands. Over all three nights, the time series measurements of YLW 16B in H and K bands are consistently synchronized, while the light curve at 4.5 µm lags behind both H and K by 74.5±3.2 seconds over the first two nights when we have usable 4.5 µm data.

From this we learn that the light must have traveled about 0.084 AU between emission and echo (with an uncertainty on the order of 0.01 AU), meaning the inner edge of the protoplanetary disk reaches in as far as one-quarter the diameter of Mercury’s orbit. The paper notes that the structure of the inner region of a protoplanetary disk depends on the mechanism by which material from the disk accretes onto the star. At work at this inner boundary is sublimation, affecting dust, and the forces of the stellar magnetosphere that shape gas distribution. 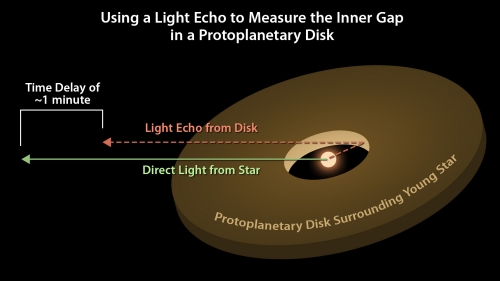 We’ve learned much about disk structure by studying disks around larger mass stars, but until now probing into the inner disk regions of pre-main sequence T Tauri stars like YLW 16B has been hampered by the proximity of the inner disk edge to the star, too small to be directly imaged. Measuring the light travel time from the young star to the inner disk wall thus breaks new ground. The authors believe the method is viable for other young stars that show variability in the near-infrared, giving us a way to measure disks where planet formation has yet to begin.

For more on light echoes, see ‘Light Echo’ Reveals Eta Carinae Puzzle, which looks at the technique in terms of supernovae. To my knowledge, this is the first time light echoes have been studied in relation to protoplanetary disks. The paper is Meng et al., “Photo-reverberation Mapping of a Protoplanetary Accretion Disk around a T Tauri Star,” accepted for publication in the Astrophysical Journal (preprint). A JPL news release is also available.