About forty light years from Earth in the constellation Aquarius is the star designated 2MASS J23062928-0502285, which as of today qualifies as perhaps the most interesting ultracool dwarf we’ve yet found. What we learn in a new paper in Nature is that the star, also known as TRAPPIST-1 after the European Southern Observatory’s TRAPPIST telescope at La Silla, is orbited by three planets that are roughly the size of the Earth. We may have a world of astrobiological interest — and conceivably several — orbiting this tiny, faint star. 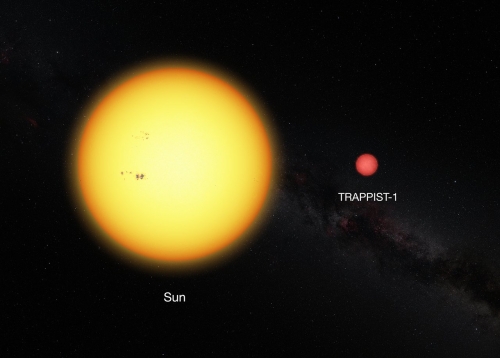 Image: Comparison between the Sun and the ultracool dwarf star TRAPPIST-1. Credit: ESO.

If we untangle the TRAPPIST acronym, we find that it refers not to an order of monks (famous for their beers) but to the TRAnsiting Planets and PlanetesImals Small Telescope, a 60 cm robotic instrument that is operated from a control room in Liège, Belgium. TRAPPIST homes in on sixty nearby dwarf stars at infrared wavelengths to search for planets. Michaël Gillon, who led the team from the University of Liège that made the recent discovery, nails its significance:

“Why are we trying to detect Earth-like planets around the smallest and coolest stars in the solar neighbourhood? The reason is simple: systems around these tiny stars are the only places where we can detect life on an Earth-sized exoplanet with our current technology. So if we want to find life elsewhere in the Universe, this is where we should start to look.”

In other words, life may exist on many worlds, and many of us believe that it does. But at our current level of equipment and expertise, a star like TRAPPIST-1 is significant because the star is small and dim enough for the atmospheres of Earth-sized planets to be studied. We learn from the Nature paper that two of the planets here have orbital periods of 1.5 days and 2.4 days respectively. The third is not as well characterized, with its orbit in a range from 4.5 to 73 days despite follow-up work with ESO’s 8-metre Very Large Telescope in Chile.

Noting how close the planets are to the host star, Gillon likens the scale of the system to that of Jupiter and its larger moons. These are worlds twenty to one hundred times closer to their star than the Earth is to the Sun, but the two inner planets receive only twice and four times respectively the stellar radiation that the Earth receives from the Sun. That puts them too close to the star to be in the habitable zone, while the outer planet may possibly lie within it.

But bear in mind that at least the inner two planets are probably tidally locked, with one side perpetually facing the star, the other turned away from it. Hence there may be regions near the terminator that receive daylight but maintain relatively cool temperatures. Given that the third planet may turn out to be entirely within the habitable zone, we have a fascinating test case for upcoming attempts to characterize the atmospheres of each of these Earth-sized worlds. 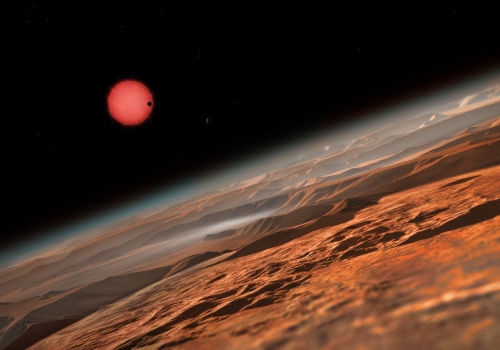 Image: Artist’s impression of the ultracool dwarf star TRAPPIST-1 from close to one of its planets. Credit: ESO.

This ESO news release quotes Julien de Wit, a co-author of the paper on this work, with regard to where we go next:

“Thanks to several giant telescopes currently under construction, including ESO’s E-ELT and the NASA/ESA/CSA James Webb Space Telescope due to launch for 2018, we will soon be able to study the atmospheric composition of these planets and to explore them first for water, then for traces of biological activity. That’s a giant step in the search for life in the Universe.”

The paper is Gillon et al., “Temperate Earth-sized Planets Transiting a Nearby Ultracool Dwarf Star,” published online in Nature 2 May 2016 (abstract). I’ll note too the continuing interest Centauri Dreams reader Harry R. Ray has shown in TRAPPIST 1, and thank him for bringing it to my attention before these first news reports surfaced.