When you don’t have the technology to get to an interesting place like the Oort Cloud, it’s more than a little helpful when nature brings an Oort Cloud object to you. At least we think that the object known as C/2014 S3 (Pan-STARRS) has moved into the warmer regions of the Solar System from the Oort. A gravitational nudge in that distant region would be all it took to send the object, with an orbital period now estimated to be 860 years, closer to the Sun.

And here things get interesting, because C/2014 S3 is the first object discovered on a long-period cometary orbit that shows all the spectral characteristics of an inner system asteroid. The level of activity on the object, apparently the result of sublimation of water ice, is five to six orders of magnitude lower than what we would expect from an active long-period comet at a similar distance from the Sun. Karen Meech (University of Hawaii) and colleagues believe that the object formed in the inner system at about the same time as the Earth, after which it was ejected before it could be bathed by long-term solar radiation.

Meech calls C/2014 S3 “…the first uncooked asteroid we have found,” which means we’re not only dealing with a building block of the early Solar System, but one that has been preserved for billions of years in a pristine environment. Further underlining its unusual status is the fact that C/2014 S3 is not developing the tail we would expect from a long-period comet as it approaches the Sun. Hence the moniker ‘Manx object’ given by Meech and team, a reference to the tail-less breed of cat from the Isle of Man. 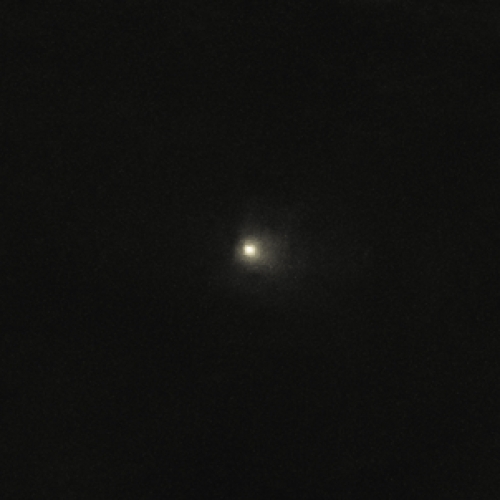 Image: Observations with ESO’s Very Large Telescope, and the Canada France Hawaii Telescope, show that C/2014 S3 (Pan-STARRS) is the first object to be discovered that is on a long-period cometary orbit, but that has the characteristics of a pristine inner Solar System asteroid. It may provide important clues about how the Solar System formed. This image of the comet was acquired using the Canada France Hawaii Telescope. Credit: K. Meech (IfA/UH) / CFHT/ESO.

A population of objects of the C/2014 S3 class would be useful indeed, and as this University of Hawaii Institute for Astronomy news release suggests, would help us differentiate between differing models of Solar System development. The problem is that while several of these models can duplicate the Solar System’s current configuration, some require the migration of the gas giants while others do not. Moreover, the models yield different predictions on the amount of rocky material expelled early on into the Oort Cloud.

Just how widely these models vary is explained in the paper. Here it describes the gas giant migration model:

The “Grand Tack” model starts the simulation of solar system formation at an early phase, when the giant planets grew and migrated in a gas-rich protoplanetary disk. During their inward migration, the giant planets scattered inner solar system material outward; during their outward migration, they implanted a significant amount of icy planetesimals [from 3.5 to 13 astronomical units (AU)] into the inner solar system. The Grand Tack model predicts the presence of rocky objects in the Oort cloud at an icy comets/rocky asteroids ratio of 500:1 to 1000:1…

But how we view the Oort Cloud varies depending upon which model we accept:

Other dynamical models, which assume nonmigrating giant planets, make different predictions about the fraction of the Oort cloud population comprising planetesimals initially within the asteroid belt or the terrestrial planet region. These predictions range from 200:1 to 2000:1. Other models do not explicitly estimate the mass of rocky planetesimals eventually implanted in the Oort cloud, but from the amount initially available, it is reasonable to expect that the ratio of icy planetesimals to rocky planetesimals in the final Oort cloud is between 200:1 to 400:1. Instead, a recent radically different model of terrestrial planet formation predicts that the planetesimals in the inner solar system always had a negligible total mass; in this case, there would be virtually no rocky Oort cloud population.

Be aware that C/2014 S3 is not the first inactive object discovered on a long-period comet orbit, with 1996 PW, found in 1996, being characterized as an extinct comet or asteroid ejected into the Oort Cloud. Five other ‘Manx candidates’ have been observed by Meech’s team, all of them showing colors similar to 1996 PW. C/2014 S3 is the only candidate to date that shows the spectrum of an S-type asteroid, a type usually found in the main asteroid belt.

So it’s an intriguing find, and according to the paper, learning how many S-type objects like it exist in the Oort Cloud will be a useful test of the various models. The paper argues that making a selection between the models will require characterization of up to 100 such ‘Manx objects,’ with the number of S-types helping us determine the ratio of icy to rocky objects in the Oort. As we are now discovering Manx objects on the order of about 15 per year as the Pan-STARRS project continues, scientists will soon have a sufficient number to work with.

Next post: Pluto: Unusual Interactions with the Solar Wind