David McComas (Princeton University) calls what his team of researchers have learned about the solar wind at Pluto ‘astonishing,’ adding “This is a type of interaction we’ve never seen before anywhere in our Solar System.” The reference is to data from the Solar Wind Around Pluto (SWAP) instrument that flew aboard New Horizons. McComas knows the instrument inside out, having led its design and development at the Southwest Research Institute. 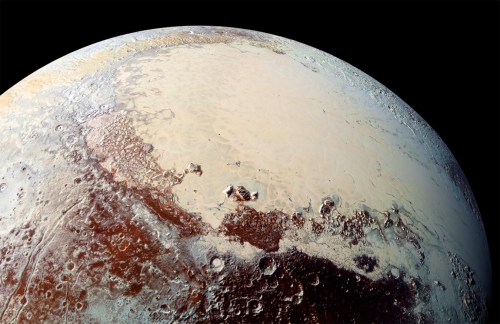 Image: The first analysis of Pluto’s interaction with the ubiquitous space plasma known as the solar wind found that Pluto has some unique and unexpected characteristics that are less like a comet and more like larger planets. Credit: NASA/Johns Hopkins University Applied Physics Laboratory/Southwest Research Institute.

What startled McComas was that Pluto’s interactions with the solar wind are nowhere near what had been predicted. This stream of charged particles flowing outbound from the Sun can reach speeds of 500 kilometers per second and above, a ragged, bursting outrush that we may one day be able to capitalize on as a way to drive spacecraft. While planets act to divert the solar wind, comets slow it far more gently, an effect that researchers assumed they would find at Pluto.

Instead, Pluto’s complexities place it somewhere between planet and comet as its atmosphere copes with the solar wind. We learn in the paper from McComas and team that despite expectations, Pluto’s gravity is capable of holding electrically charged ions in its extended atmosphere. The dwarf planet has an ion tail extending ‘downwind’ to a distance of about 100 Pluto radii (120,000 kilometers). Earth has a similar ion tail, and Pluto’s is said to show ‘considerable structure.’

And Pluto, we learn, behaves more like its larger planetary cousins, as the image below suggests.

Image: This figure shows the size scale of the interaction of Pluto (at lower left) with the solar wind. Scientists thought Pluto’s gravity would not be strong enough to hold heavy ions in its extended atmosphere, but Pluto, like Earth, has a long ion tail (red) loaded with heavy ions from the atmosphere. Pluto has a very thin “Plutopause” (purple), or the boundary of Pluto’s tail of heavy ion tail and the sheath of the shocked solar wind (blue) that presents an obstacle to its flow. Credit: American Geophysical Union.

The SWAP instrument was able to separate heavy ions of methane, which is the primary gas escaping the atmosphere, from the light hydrogen ions coming from the Sun. From it we also learn that Pluto has a thin ‘Plutopause,’ a boundary region where the heavy ion tail meets the solar wind along a sheath of particles. Moreover, the solar wind is not blocked until it reaches within about about 3000 kilometers of the dwarf planet — the paper calls this the ‘upstream standoff distance’ — a bit less than three Pluto radii.

As the paper notes, we’ll have a good deal of data from different parts of the Solar System to examine as we try to put Pluto into context:

While the small size of the interaction region relative to Pluto is reminiscent of Mars and Venus, we note that recent observations of the solar wind interaction with the relatively weakly out-gassing Comet 67P Churyumov-Gerasimenko by instruments on ESA’s Rosetta spacecraft show deflection of the solar wind with relatively modest decrease in speed. We anticipate interesting scientific discussions of the relative roles of atmospheric escape rate, solar wind flux, and IMF strength at Mars, Comet 67P and Pluto as the data from the MAVEN, Rosetta and New Horizons spacecraft are further analyzed.

And as McComas notes in this Princeton news release, “The range of interaction with the solar wind is quite diverse, and this gives some comparison to help us better understand the connections in and beyond our solar system. The SWAP data will … be reanalyzed … for many years to come as the community collectively grapples with Pluto’s unique solar wind interaction — one that is unlike that at any other body in the solar system.”

The paper is McComas et al., “Pluto’s Interaction with the Solar Wind,” accepted at the Journal of Geophysical Research: Space Physics (abstract / preprint).