If you’ve been following the Breakthrough Starshot concept in these pages and elsewhere, you’ll know that it’s small at one end and big on the other. A beamed sail mission, it would use sails four meters to the side — quite small by reference to earlier beamed sail designs — driven by a massive phased laser array on the Earth. The array is projected to be a kilometer to the side, incorporating laser emitters working in perfect synchronization to produce what Pete Worden, formerly of NASA Ames, described in Palo Alto as “a laser wind of 50 gigawatts.” Worden is now executive director of Breakthrough Starshot.

As with the sail, so with the payload. We have no macro-scale spacecraft here but a ‘Starchip’ about the size of a postage stamp, making it a kind of futuristic smartphone containing not just cameras, communication equipment and navigation instruments but tiny thrusters. If you want to imagine something like this, you take trends in digital technology like Moore’s Law and extrapolate them forward, for this is a generation-length project aiming at an actual mission in, at minimum, thirty years, unless the concept studies find an irrevocable showstopper.

Sails and their Origins

As Breakthrough Starshot begins to organize and get its concept study launched, I’ve been looking back at its roots. Several things come to mind, the first of which is the kind of sail Robert Forward once talked about. In an earlier post, I talked about Starshot as “classic Bob Forward thinking rotated according to the symmetries of our new era,” and I think that’s about right. In the sense that Forward was the first to discuss putting a laser beam on a sail, the project draws undeniable inspiration from him. But it also takes his ideas in entirely new directions.

When I talked to Phil Lubin (UC-Santa Barbara) about Starshot, he referenced his Roadmap to Interstellar Flight paper, one that clearly draws on work he has been developing for the NASA Innovative Advanced Concepts (NIAC) office, where he received a 2015 grant. The ‘Roadmap’ paper, submitted to the Journal of the British Interplanetary Society, also makes use of another JBIS paper Lubin wrote called Directed Energy for Relativistic Propulsion and Interstellar Communications. And the Starchip concept itself has roots in Mason Peck’s continuing work on the tiny craft called ‘sprites’ at Cornell University.

Forward’s sail ideas were as large as the Breakthrough Starshot sail is small. Consider this: For a 1984 paper, he considered a vehicle massing 80,000 tons that would be brought up to half the speed of light by a sail fully 1000 kilometers across. A power station in the inner Solar System would power up a 75,000 TW laser system, and the beam would rely on a huge Fresnel lens in the outer system to keep it focused on the departing starship. Forward even imagined a ‘staged sail’ concept that would allow deceleration, rendezvous, and Earth return for his crew.

If you’re interested in this era and the work it produced, be aware that JBIS was a major venue for sail concepts in the 1980s. It was here that Gregory Matloff published his classic 1984 paper “Solar Sail Starships – The Clipper Ships of the Galaxy” (JBIS 34, 371-380), one that would be followed by a series of optimization papers in the same venue, and also developed in his book The Starflight Handbook (Wiley, 1989). The latter contains Forward’s endorsement, one I consider a classic in the book blurb business: “Don’t leave the Solar System without it!” Matloff became one of the leading theorists on sail design along with Forward’s explicitly named successor, writer and physicist Geoffrey Landis.

Here I need to remind those who haven’t already seen it that Landis’ new paper “Mission to the Gravitational Focus of the Sun: A Critical Analysis” (preprint) looks at problems at realizing the FOCAL concept, in particular dealing with the question of imaging capabilities. And we’ve looked recently at Claudio Maccone’s ideas on FOCAL for communications in Starshot and the Gravitational Lens.

You can see that what we have at play here is the evolution of technology making new space concepts possible. Indeed, part of the Breakthrough Starshot premise is that further evolution during the thirty year ‘window’ for the system to be developed will solve many of the intractable problems that face it. The list of issues, as we’ve seen in previous posts, is large, ranging from getting a huge phased laser array to perform to keeping the small sails on the beam for the agonizing two minutes of acceleration at 60,000 g’s. Not to mention getting data back to Earth. 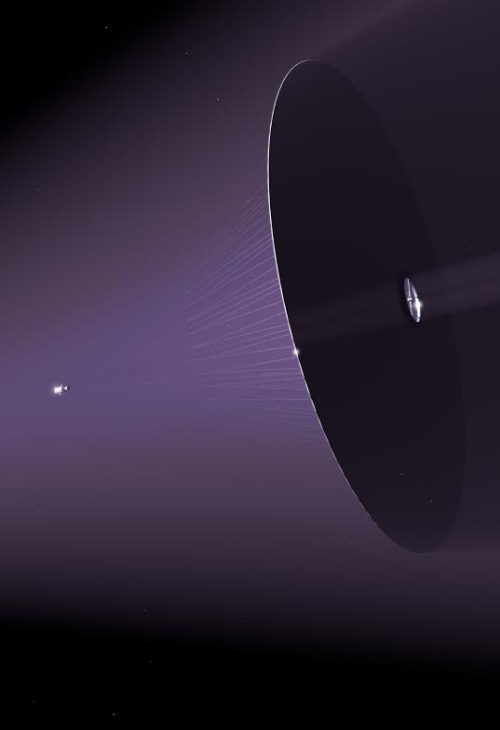 Image: A futuristic beamed sail design as depicted by Adrian Mann (no relation here to Breakthrough Starshot). Thanks to Jim Benford for passing it along.

Thinking about using the gravitational lens of the Sun for communications and imaging calls to mind the rich heritage solar sailing draws upon from Italian scientists. The gravitational lens mission that Maccone has come to call FOCAL can trace its origins back to the late 1980s. Here I should mention Quasat, which was conceived as an Earth-orbiting radio telescope based on an inflatable sail technology.

The Quasat notion came from Italian aerospace company Alenia Spazio. Gregory Matloff would thoroughly analyze the Quasat concept in a 1994 paper, discussing a high-reflectivity sail with an area of 10,000 square meters at a thickness of 2 μm, with an aluminum reflective layer with a thickness of 0.1 μm, carrying a 100 kg payload. Adapted for the gravity focus mission, the sail would, with the help of a close Solar gravity assist and perhaps an assist at Jupiter as well, reach the gravity focus at 550 AU in approximately sixty years.

A gravity focus mission is quite a stretch now and it was even more of one in the early 1990s, which is one reason the European team involved in the Quasat and other sail work turned to a project called Aurora. The effort was conceived at the International Astronautical Congress in Graz, Austria in 1993, with a core team led by Giovanni Vulpetti and including both Claudio Maccone and Italian engineer and author Giancarlo Genta. This turned out to be highly influential work, producing fifteen papers and presentations to European space agencies.

What became known as the Aurora Collaboration would produce a thin-film 250-meter square sail design that would venture to the heliopause and beyond at speeds about three times that of the Voyager probes. The issues it addressed were numerous, as explained in Solar Sails: A Novel Approach to Interplanetary Travel (Springer, 2008), written by Vulpetti, Les Johnson and Greg Matloff:

In a six-year period ending in 2000, the Aurora Collaboration would analyze telecommunications systems, the optical properties of sails, their optimized trajectories all the way out to the gravitational lens, communications options and the means of reducing the thickness of the sail. The group was an entirely self-supporting initiative whose work relied on the voluntary efforts of top scientists in the area of sail design. It would have later reverberations in NASA’s work on precursor interstellar missions and the European ESA/ESTEC heliopause probe.

I’m thinking about Aurora today particularly because I’ve just heard from Giovanni Vulpetti that he has made available a series of files of recent lectures he made at the University of Rome. Have a look at Dr. Vulpetti’s Astrodynamics and Propulsion website and click on Lectures to see over 400 slides dealing with sailcraft trajectories, thrust calculations, solar photon and plasma flow and a great deal more. Those of you interested in delving into the technical aspects of various sail configurations including magnetic sails will have plenty of material to work with here. Digging around in the site you’ll also find Vulpetti’s Problems and Perspectives in Interstellar Exploration paper now available in its entirety online.

What a pleasure it must be for the scientists who developed key sail concepts to see the actual deployment of sails like IKAROS in space. Now their work is being examined anew as we look for ways to continue reducing the size and thickness of sails, and ponder how best to get a propulsive beam onto a sail for acceleration up to a substantial percentage of the speed of light. Breakthrough Starshot continues to take the process forward as it launches its concept study, and in doing so draws upon a rich history of work in the service of space sailing.