The unusual star designated KIC 8462852, and now widely known as ‘Tabby’s Star,’ continues to be an enigma. As discussed in numerous articles in these pages, KIC 8462852 shows anomalous lightcurves that remain a mystery. Recently Michael Hippke explored a related question: Was the star dimming over time, as postulated by Louisiana State’s Bradley Schaefer? The two sharply disagreed (references below), leading Hippke and co-author Daniel Angerhausen to re-examine their conclusions. Now, with further collaboration from Keivan Stassun and Michael Lund (both at Vanderbilt University) and LeHigh University’s Joshua Pepper, Hippke and Angerhausen have a new paper out, peer-reviewed and accepted for publication by The Astrophysical Journal. What follows are Michael Hippke’s thoughts over the controversy as it stands today, with the dimming of KIC 8462852 again in doubt. 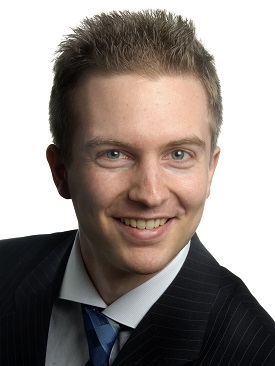 Tabetha Boyajian et al. released a paper on the preprint platform astro-ph in September 2015, which quickly got the Internet up to speed. Planet Hunters, an open community that searches data from the Kepler space telescope, found this unusual star that is now known as “Tabby’s Star”. It is observed to undergo irregularly shaped, aperiodic dips in flux of up to ~20%, much more than expected for any orbiting planets.

Media interest skyrocketed in October, when Jason Wright et al. released a preprint in which they discussed — among many other possibilities — the idea that the dips could originate from an alien race building a mega-size construction around the star, perhaps in the form of a “Dyson sphere”. Could it really be true that we found the first ever evidence of a powerful extraterrestrial civilization? A controversial discussion quickly ensued.

Further examination in other electromagnetic wavelengths only brought disappointing null results. The star was unremarkable in the infrared, showed no sign of artificial laser pulses, or radio emissions. The only somehow realistic astrophysical explanation was offered by Bodman & Quillan, who suggest the presence of a large family of comets, and which as of today are considered to be the “best” explanation. 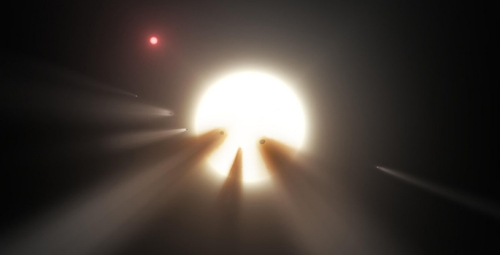 In January 2016, Bradley Schaefer released a preprint that examined historical photographic glass plates from the Harvard Observatory taken since 1889. His results seemed to show that “Tabby’s Star” had dimmed by 20% since that time, which was interpreted by many in the media as an indication of a quickly proceeding alien construction.

This was about the time when Daniel Angerhausen (an experienced astrophysicist at the NASA Goddard Space Flight Center) and I got interested. Our basic thought was: “If this were true, it would be the greatest thing in history!” We wanted to see the evidence with our own eyes, because honestly, we had big hopes ourselves. Initially. We think it is very human to be wanting to be part of something big, or at least seeing it happen. So, we had hopes that something big had been found, and we had the chance to see it happen.

So we dug into the Kepler data and found them rock-solid. These strange dips were really there! Also, we downloaded the historic Harvard data and plotted them. Schaefer had binned them in 5-year intervals, but behind these bins, there were actually over a thousand individual data points. When we plotted these on our screen, and overlaid a linear trend, we became very disappointed. The Harvard plates have an uncertainty (over 100 years) of order 0.1 to 0.2mag, and this was also visually evident. We had serious doubts that this dimming trend was valid.

We selected some comparison stars, which had similar scatter and trends, and decided that we would release our findings as a preprint on astro-ph. KIC 8462852 is a very special case not only scientifically but also in the way it was discussed in the community. It became one of the most publicly discussed astronomical objects. Many articles on this fascinating object (including its original detection) were published on astro-ph before peer review and some even called it a revolution in scientific discussion, making it real time and on various social media channels involving the public.

Bradley Schaefer himself gave at least 2 interviews on the day his (at that time not peer-reviewed) manuscript came out. Following his own arguments that “putting up unchecked and false claims is bad all the way around”, we had no other choice than putting our doubts on his results out immediately, so that the community, the involved media and the interested public did not have to wait many months for the formal rebuttal. We also decided to do this to keep the discussion public and have interested laymen follow it; we even gave a recipe to reproduce the data using the publicly available Harvard DASCH [Digital Access to a Sky Century @ Harvard] data for the interested reader [see KIC 8462852: No Dimming After All?].

The immediate reactions to our preprint were overwhelmingly negative, just as most of the other publications on KIC 8462852 have been. In retrospect, we attribute this to two very human factors. The first was that some of our previous assumptions and methods were indeed inconsistent and the choice of some comparison stars questionable. But errors are human, and everybody makes them at times! While we believe that these errors did reduce the clarity of our result, we still believed that the result itself was correct. This view was not shared by Bradley Schaefer, who published his reply on Centauri Dreams [see Bradley Schaefer: A Response to Michael Hippke]. The other issue we see was that most readers wanted to believe that this thing was real. Schaefer was an authority, while Hippke was described as a “novice”, and “proof by authority” seemed to weigh in.

As this time, we decided to do two things. First of all, we cut all media connections. Second, we started collecting all issues and questions raised by Schaefer, and many others in the community and here on Centauri Dreams. “Tabby’s Star” started off as a community project, and it continued to be one! The pure number of emails we received was enormous. Our favourite mail, which was received via hand-written paper mail actually, was by an American who said that he was once captured by these aliens himself and is a first-hand witness!

Most feedback was incredibly helpful, however. We gained several co-authors who contributed several more analyses, statistical tools and better ways to select comparison stars. We also got an invitation to the ASTROPLATE conference in Prague, where Michael Hippke met most of the glass photography community. We spent a whole week discussing calibration techniques, scanners, and fungus (one of the reasons why digitization of these plates is so important!). These fungi are actually called “gold disease” owing to their look on the glass. We enjoyed long evening talks about the millions of plates that still await their scientific use, and after all of this, had the chance to discuss our own findings in a presentation and discussion.

During all this, and afterwards, we continued the peer-review process at the Astrophysical Journal. We have published several papers in this journal before, and, as always, it was a very professional process. Yet, they appointed two referees instead of the usual one, and we went through several rounds of question-and-answer to nail down every detail. This took considerable time. Now the paper has been accepted for publication (and is updated on astro-ph). From the feedback we got, and given the much more detailed than usual review process, the study is probably one of the most solid and waterproof papers we ever published. We believe that it is established beyond any reasonable doubt that no dimming can be found within the uncertainties of 0.2mag per century.

Now, what does that mean for the mystery? Are there no aliens after all? Probably not! Still, the day-long dips found by Kepler are real. Something seems to be transiting in front of this star. And we still have no idea what it is!

The cool message here, however, is that we now for the first time in human history have technology that can at least in theory detect such things, with upcoming missions such as JWST and PLATO. To solve the mystery, there are now several more projects under way. The American Association of Variable Star Observers (AAVSO) has collected thousands of amateur astronomer observations to discover new dips. Others, such as the Las Cumbres Observatory Global Telescope (LCOGT) have joined the effort. Observing further dips in different colors can reveal information about the chemistry of the transiting object, which might confirm or reject a cometary origin. Who knows, perhaps these telescopes have already captured some exciting new data, and any day researchers might publish a paper that solves the mystery!

The paper is Hippke et al., “A statistical analysis of the accuracy of the digitized magnitudes of photometric plates on the time scale of decades with an application to the century-long light curve of KIC 8462852,” accepted at the Astrophysical Journal (preprint). A Vanderbilt news release is also available.