What’s a movie director supposed to do about gravity? In The Martian, we see Matt Damon moving about on Mars with a gait more or less similar to what he would use on Earth, despite Mars’ 0.38g. Harrison Ford changes worlds but never strides in The Force Awakens. About the gravitational challenges of 1953’s Cat Women of the Moon, the less said the better. Even so, we can chalk all these problems up to the fact that both top directors and their B-film counterparts are forced to film at the bottom of a gravity well, so a certain suspension of disbelief is at least understandable.

But assuming that gravity invariably increases as planets get bigger can be misleading, as Fernando J. Ballesteros (Universitat de València) and Bartolo Luque (Universidad Politécnica de Madrid) demonstrate in a new paper in Astrobiology. We learn that some larger worlds in our own Solar System have gravity not all that different from the Earth. In fact, the surface gravities for Venus, Uranus, Neptune and Saturn weigh in at 0.91g, 0.9g, 1.14g and 1.06g respectively, although these worlds are 0.82, 14, 17 and 95 times Earth’s mass. 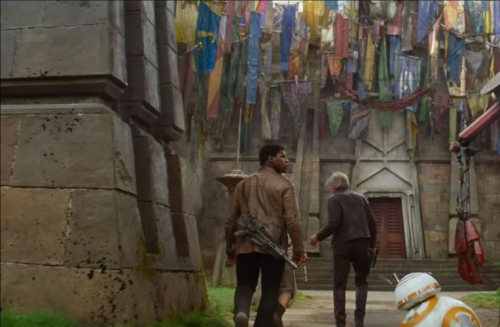 Image: Walking on the planet Takodana looks more or less like walking on Earth in The Force Awakens, although the bar scene there is more interesting. Credit: Disney/Lucasfilm/Bad Robot Productions.

How do we go about making these deductions? Usefully, we have plentiful planets to work with as a result of the Kepler mission, and the fact that Kepler works with transits is likewise helpful. A transit light curve can show us how much starlight is blocked by the planet, which provides an estimate of the planet’s size, assuming we have a pretty good idea of the central star’s size.

Radial velocity measurements can then be brought to bear, a technique that supplements the transit method by adding a lower boundary to the planet’s mass. Remember that this measurement depends upon the viewing angle, as we can’t always know the orientation of a given planet’s orbit; i.e., in straight radial velocity studies, we won’t know whether we’re looking at a solar system edge-on, or from directly above (the measurement is M x sin(i), with i corresponding to the viewing angle. With transiting planets, though, we have a better read on the viewing angle because we see the planet transit across its star.

With an idea about the size of a world and a sound estimate of its mass, we can work out the planet’s surface gravity (gs = GM/R2). Ballesteros and Luque plot the surface gravity vs. mass for a range of exoplanets, folding in data from our own Solar System, where measurements are, obviously, far more precise. Three ‘regimes’ emerge from this work:

And it’s in the transition zone that things get interesting. Let me quote from the paper:

Hence the similarity in surface gravity between Venus, Uranus, Neptune, Saturn and the Earth, a non-intuitive result given the differences between these planets in structure and composition. As the number of confirmed exoplanets grows — and we saw the largest single addition to the catalog ever yesterday — we are able to understand that having five worlds with roughly the same surface gravity is a general trend. Fitting these findings in with planet formation models will be a challenge that should ultimately improve our understanding of the processes at work.

The accretion process and the competition for materials during planetary formation impose severe constraints on feasible planets. Current models of population synthesis (Mordasini et al., 2015) are designed to take this into account and can address many of the observed features. However, such models fail to explain this plateau and predict instead a noticeable increasing trend in surface gravities in this region.

Hence the value of our steadily increasing exoplanet catalog as we contrast real planetary systems with the theories we apply to their formation. Thus, as Ballesteros and Luque note, watching Harrison Ford walking on the planet Takodana as if he were taking a stroll down Hollywood Boulevard is not a simple moviemaker concession to Earth’s gravity. In this case, what we’re learning about surface gravity makes such strolls plausible.

The paper is Ballesteros and Luque, “Walking on Exoplanets: Is Star Wars Right?” Astrobiology Vol. 16, No. 5 (2016). Abstract. Preprint on arXiv.