Although we always think of Kepler — and its successor mission K2 — as an exoplanet observatory, the spacecraft has also been put to work on objects much closer to home. Enter 2007 OR10, a dwarf planet that is currently about twice as distant from the Sun as Pluto. The Kepler instrument is, of course, fine-tuned for spotting the minute variations in light caused when a planet passes in front of a distant star. But that makes it an excellent tool for studying 2007 OR10, whose dim light and red color have proved difficult to parse by other instruments.

Kepler, though, is not alone in this work. What we see is a useful collaboration between it and the European Space Agency’s Herschel Space Observatory. Using archival data from the latter, researchers have been able to measure both the fraction of starlight absorbed and later re-radiated as heat (via Herschel) as well as the fraction of starlight reflected from 2007 OR10 via Kepler. K2, sensitive to minute changes in brightness, was able to show that the object is one of the slowest rotating objects in the Solar System, taking about 45 hours to complete a revolution. 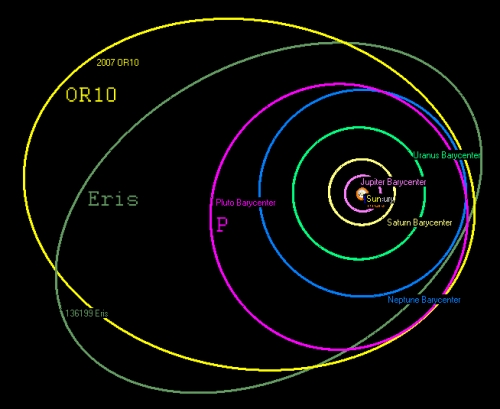 Image: The orbit of 2007 OR10 compared to the orbit of Eris, Pluto, and the outer planets. Credit: kheider [GPL (http://www.gnu.org/licenses/gpl.html)], via Wikimedia Commons.

Coupled with the Herschel data in the infrared, we’ve now established a more accurate measurement of 2007 OR10’s diameter than Herschel could provide on its own. The dwarf planet has a diameter of 1535 kilometers, some 250 kilometers greater than previously thought. That makes the surface darker as well, given that the same amount of light is being reflected by a larger object. The paper on this work discusses what this implies about the surface:

The red color of 2007 OR10 is likely to be due to the [retention] of methane, as it was proposed by Brown, Burgasser & Fraser (2011). In Fig. 1 in Brown, Burgasser & Fraser (2011), 2007 OR10 is nearly placed on the retention lines of CH4, CO and N2. The larger diameter derived in our paper places this dwarf planet further inside the volatile retaining domain, making the explanation of the observed spectrum more feasible.

The newly determined larger size of the dwarf planet, then, makes it more likely that the object can retain these volatile ices than if it had been smaller. The size, in fact, makes 2007 OR10 the third largest dwarf planet known after Pluto and Eris, just ahead of Makemake. 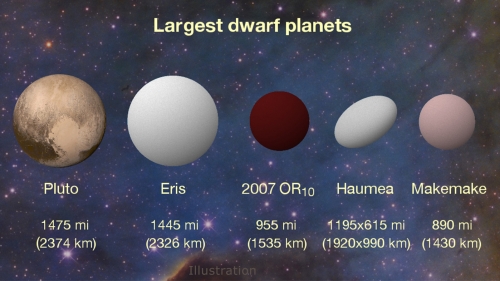 Image: New K2 results peg 2007 OR10 as the largest unnamed body in our solar system and the third largest of the current roster of about half a dozen dwarf planets. The dwarf planet Haumea has an oblong shape that is wider on its long axis than 2007 OR10, but its overall volume is smaller. Credits: Konkoly Observatory/András Pál, Hungarian Astronomical Association/Iván Éder, NASA/JHUAPL/SwRI.

This isn’t the first time K2 has been involved with objects within the Solar System. Its previous targets have included the objects (278361) 2007 JJ43, 2002 GV31 and Neptune’s moon Nereid. Now, at 2007 OR10, we’re seeing variations in rotational brightness that are intriguing for their suggestion of variations in surface albedo. Here I can’t help recalling New Horizons and the way we went from faint indications of surface features during the long approach, to the close-up clarification of numerous kinds of terrain. How long will it be before we can repeat that feat with another outer system object like this one?