Moons of the Outer Dwarf Planets

Yesterday’s post on the dwarf planet 2007 OR10 brought comments asking why an object this large hasn’t yet been named. Actually it has been, but only briefly. It was Meg Schwamb, then a graduate student of Caltech’s Michael Brown, who discovered 2007 OR10, and Brown quickly gave it the nickname Snow White — as the seventh dwarf Brown’s team had discovered, the name seemed made to order. What derailed the nickname was the realization that 2007 OR10 is not white but red, and as we saw yesterday, one of the darkest known Kuiper Belt objects.

Schwamb herself was quoted in this JPL news release on the matter:

“The names of Pluto-sized bodies each tell a story about the characteristics of their respective objects. In the past, we haven’t known enough about 2007 OR10 to give it a name that would do it justice. I think we’re coming to a point where we can give 2007 OR10 its rightful name.”

We’ll see just what that rightful name is. Remember, too, that 2007 OR10 is now known to be just larger than Makemake, making it about a third smaller than Pluto. As to Makemake itself, a dwarf planet named after a creation deity of the Rapa Nui people of Easter Island, we learned in late April that it has a small, dark moon about 160 kilometers across. That one is designated S/2015 (136472) 1 but is referred to informally as MK 2. The moon is going to be useful as astronomers study the density of Makemake, just as Charon helped us understand Pluto. 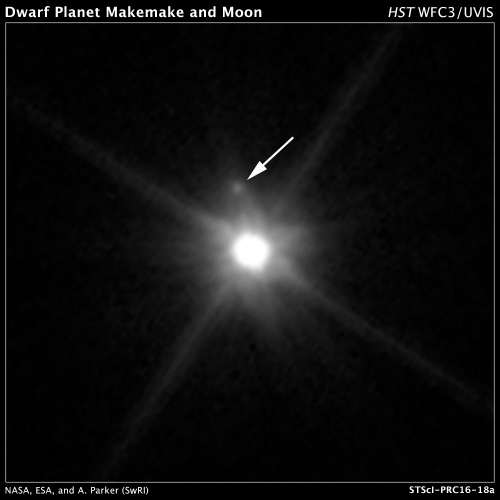 Image: This Hubble Space Telescope image reveals the first moon ever discovered around the dwarf planet Makemake. The tiny moon, located just above Makemake in this image, is barely visible because it is almost lost in the glare of the very bright dwarf planet. The moon, nicknamed MK 2, is roughly 160 kilometers wide and orbits about 21,000 kilometers from Makemake. Makemake is 1,300 times brighter than its moon and is also much larger, at 1400 kilometers across. Credit: NASA, ESA, A. Parker and M. Buie (Southwest Research Institute), W. Grundy (Lowell Observatory), and K. Noll (NASA GSFC).

These are good times for those of us interested in small worlds at the edge of the Solar System, especially when you factor in the continuing dataflow from New Horizons. And now we have new analysis of the dwarf planet I would most like to get an orbiter around, the ever intriguing Haumea. Its unusual shape — Haumea is a flattened ellipsoid with its longest axis about 2000 kilometers across — is likely the result of an ancient collision. It’s also highly reflective, with a surface evidently covered with crystalline water ice (cryovolcanism?).

Rotating every 3.9 hours, which is faster than any other large object in the system, Haumea was discovered to have a dark spot on its otherwise bright surface in 2009, an area evidently richer in minerals and organic compounds than surrounding areas. The dwarf planet also has two moons, known as Hiʻiaka (the outer satellite) and Namaka (the inner), and is evidently the parent body of a family of icy fragments with similar albedo now orbiting the Sun. Just how the moons formed and what we can learn about the composition of Haumea itself make this an intriguing object for those trying to piece together the early history of the outer system.

Both Pluto and Haumea have multiple moons, while Eris and Makemake have a single moon each. But what Haumea seems to lack in comparison to Pluto are small icy moons like Pluto’s Nix, Hydra, Kerberos and Styx. In a new paper, Luke Burkhart (Harvard-Smithsonian CfA) and colleagues look at Haumea via Hubble data taken in July of 2010, in a search for additional moons that came up dry. The work sets strong limits on the size and location of any possible undiscovered moons, with implications for the formation of the satellite system.

Darin Raggozine (Florida Institute of Technology) says that despite some similarities, the satellite systems we’ve observed around the outer dwarf planets must have had different formation processes. Both Pluto and Haumea have planetary scientists searching for answers. “There is no self-consistent formation hypothesis for either set of satellites,” adds Raggozine in this FIT news release.

We also learn that moons the size of Pluto’s Nix and Hydra would have been detected if present at Makemake, and in fact would be near the detection threshold even for distant Eris. The paper notes that improving these detection limits would take extensive observations, a task perhaps suited to the James Webb Space Telescope. What we do know is that no satellites larger than about 8 kilometers in radius are found between 10,000 and 350,000 kilometers of Haumea. This is the region which, around Pluto, contains Charon and the four smaller satellites.

Image: A comparison of the four icy dwarf planets and their moons, with all objects to scale. These large bodies in the outer Solar System share many similarities, but one difference is that only Pluto has a collection of tiny moons (shown near the center). Research from Luke Burkhart at Yale University, Darin Ragozzine at Florida Institute of Technology and Michael Brown at Caltech found that Haumea, a dwarf planet on the edge of our Solar System, doesn’t have the same kind of moons as its well-known cousin Pluto. Credit: D. Ragozzine (FIT)/NASA/JHU/SwRI.

The paper is Burkhart et al., “A Deep Search for Additional Satellites around the Dwarf Planet Haumea” (preprint).

Next post: Looking for Life Around Red Giant Stars