Ever since coming back from the Breakthrough Discuss meeting in Palo Alto, I have been pondering the enormous issues the Breakthrough Starshot project will encounter. Getting a tiny spacecraft up to twenty percent of lightspeed is only the beginning of an effort that has to deal with power generation, a phased laser array of enormous strength and complexity, the miniaturization of critical components, lightsail integrity under thrust and much more.

These topics were freely discussed in Palo Alto, and especially at the Yuri’s Night party that Yuri Milner threw for the assembled conference goers. When I talked to Milner at the party, he suggested an idea that we have been working on ever since. In order to keep the discussion on the critical issues involving Breakthrough Starshot in front of the interstellar community, why not set up a linkage between the discussion areas of the Breakthrough site and Centauri Dreams? This site would maintain its usual structure and separate comments, but it would then include a section specifically devoted to pursuing the Breakthrough Starshot concept.

I am the world’s poorest programmer, but a crack team from Breakthrough Initiatives, led by Stepan Torchyan and including Peter Petrov and Konstantin Efimov knew exactly what to do. As of this morning, the new section goes live. You’ll find the ‘Challenges’ forum accesible through the ‘Breakthrough Starshot’ tab at the top of the Centauri Dreams logo, Click on ‘Breakthrough Starshot’ and you’ll see it is set up as a series of forums, each of them dealing with a single major issue for the project. A ‘Challenges’ link also appears on the Breakthrough Initiatives site.

What’s happening here is that any comments Centauri Dreams readers place in one of these forums will be mirrored on the Breakthrough Initiatives site, while comments posted there will appear on the ‘Challenges’ forum pages on this site. As long-time readers know, Centauri Dreams doesn’t require a login in order to post, but ‘Challenges’ does. You can set up a password on the ‘Challenges’ page. Click the ‘Breakthrough Starshot’ tab, then click ‘Sign In’ and, on the ensuing page, ‘Sign Up.’ 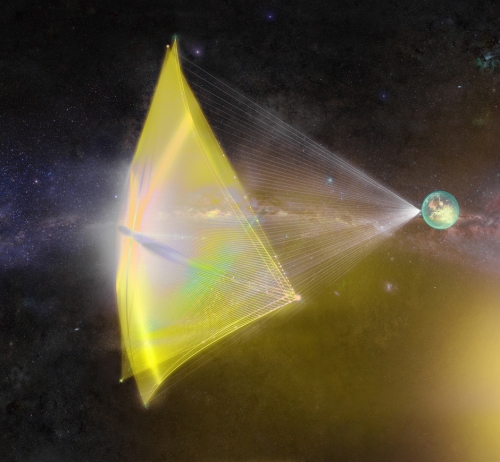 When you go to the new forum, you’ll see that the list of topics is lengthy, and I hope that we can continue the many good discussions we’ve already had on Centauri Dreams in this new venue, even as we follow the project with articles and comments on Centauri Dreams itself. Many of the current topics came under discussion in Palo Alto, but as Breakthrough Starshot begins its work this summer, each will come into sharper focus.

Simply put, there could be a deal-breaker almost anywhere on the list of Challenges. If we build the phased laser array to boost a Starchip up to a substantial percentage of c, would the sail be stable under the beam? Would the phased array work as we hope through the atmosphere? What about objects in the beam’s path — a bird, an airplane? What of the collision potential for a spacecraft moving at these velocities in cruise, and how do we manage to adjust the spacecraft’s course on the way? And a huge one: How do we manage data return considering the minute size of the Starchip we hope to send to Alpha Centauri?

Have a look at the Challenges forum as we begin to see how it will work. Stepan Torchyan’s team will check into any bug reports if problems arise, and after an initial shakedown, we should be able to add to the Breakthrough Starshot discussion daily. I’m happy to be able to bring these forums to the attention of the Centauri Dreams audience considering how much I’ve learned from readers here since I began the site in 2004. I have no doubt we’ll be able to make a contribution to this ongoing study to achieve what I’ve always dreamed about, a human technology arriving intact and returning data from the Alpha Centauri system.