So often planets described as ‘potentially habitable’ turn out to be over-rated — we look deeper into their composition and characteristics only to find that the likelihood of liquid water on the surface is slim. How to make more accurate calls on the matter of habitability? One way may be to combine orbital and atmospheric models, adjusting each with the known parameters of the planet in question. A new study does just that for the interesting world Kepler-62f.

About 1200 light years from Earth in the direction of the constellation Lyra, Kepler-62f has a radius 40 percent larger than Earth’s, which puts it well below the 1.6 RE demarcation line that is increasingly thought to define the difference between Earth-like worlds and planets that are more like Neptune. We’re probably looking at a rocky planet here. It’s also a planet that orbits its K-class primary at a distance that could place it in the outer regions of the habitable zone (as defined, again, by the presence of liquid water on the surface). 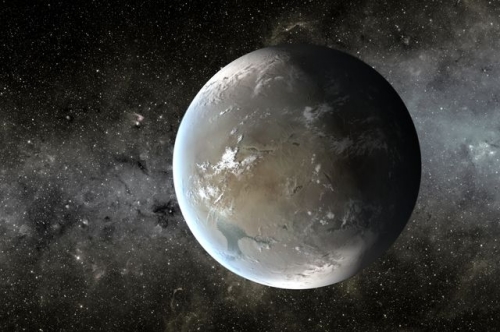 Image: Kepler-62f, shown here in an artist’s rendering, is far enough from its star that its atmosphere would need a high concentration of carbon dioxide to maintain liquid water on the planet’s surface. Credit: NASA Ames/JPL-Caltech/T. Pyle.

The new work on this world was conducted by Aomawa Shields (UCLA), working with Rory Barnes, Eric Agol, Benjamin Charnay, Cecilia Bitz and Victoria Meadows (all at the University of Washington, where Shields received her PhD). It examines the planet’s atmosphere to consider scenarios that could produce habitability. The team modeled climate possibilities using two different methods — the Community Climate System Model and the Laboratoire de Météorologie Dynamique Generic Model. Informing the climate modeling was the use of another computer model, HNBody, which was used to analyze and adjust the planet’s orbital parameters.

“We found there are multiple atmospheric compositions that allow it to be warm enough to have surface liquid water. This makes it a strong candidate for a habitable planet.”

The necessary composition involves a great deal more carbon dioxide that we find in Earth’s atmosphere, necessary to keep the surface from remaining in a deep freeze. Remember, the planet circles a K-class star cooler than the Sun, and at a distance further away from the primary than the Earth from our star. By adjusting carbon dioxide levels in the atmospheric model, the team learned that given various orbital configurations, there were circumstances where habitability was possible. Some configurations work better than others, but the team found that even with an Earth-like level of carbon dioxide, there were rare but possible orbital configurations that allowed at least part of the year to be warm enough for liquid water.

At 41% of the modern solar constant, this planet will likely require an active carbonate silicate cycle (or some other means by which to produce high greenhouse gas concentrations) to maintain clement conditions for surface liquid water. With 3 bars of CO2 in its atmosphere and an Earth-like rotation rate, 3-D climate simulations of Kepler-62f yielded open water across ∼20% of the planetary surface at the upper limit of the stable eccentricity range possible for the planet, provided that it has an extreme obliquity (90°). With 5 bars of CO2 in its atmosphere, a global mean surface temperature similar to modern-day Earth is possible for the full range of stable eccentricities and at the present obliquity of the Earth. This higher CO2 level is therefore optimal, as it is below the maximum CO2 greenhouse limit, and generates habitable surface conditions for a wide range of orbital configurations throughout the entire orbital period of the planet. If Kepler-62f is synchronously rotating, CO2 concentrations above 3 bars would be required to distribute sufficient heat to the night side of the planet to avoid atmospheric freeze-out.

There is a faint chance that with CO2 levels like the Earth’s, Kepler-62f could experience surface melting of ice sheets on an annual cycle. This would depend on a high degree of axial tilt, or obliquity — the angle between the planet’s rotational axis and its orbit. The Earth’s obliquity is 23 percent. An axial tilt of 60° or higher, coupled with summer solstice at a given hemisphere occurring at the planet’s closest approach to its star, could produce this annual effect, allowing surface conditions that were at least periodically habitable.

The paper is Shields et al., “The Effect of Orbital Configuration on the Possible Climates and Habitability of Kepler-62f,” published online by Astrobiology 13 May 2016 (abstract / preprint).