The thought that water and organic molecules might have arrived on the early Earth from the impacts of comets and asteroids has long been provocative, and our missions to nearby comets are now paying off with insights into the possibility. It was back in 2004 that the Stardust mission flew past Comet Wild 2, collecting dust samples that showed traces of the amino acid glycine. Possible contamination of the samples during their analysis left the question open, however.

Now we have news that the European Space Agency’s Rosetta mission has also found glycine — a significant organic compound that appears in proteins — at Comet 67P/Churyumov-Gerasimenko. The spacecraft’s ROSINA instrument (Rosetta Orbiter Spectrometer for Ion and Neutral Analysis) detected glycine in October of 2014, with later measurements taken during the August 2015 perihelion event, where cometary outgassing was at its peak.

Kathrin Altwegg (University of Bern), who led the study, calls this “…the first unambiguous detection of glycine in the thin atmosphere of a comet.” From the paper:

ROSINA’s double focusing mass spectrometer (DFMS) ionizes the incoming volatiles by electron impact ionization and detects the corresponding positively charged fragments. Unlike for meteorites or Stardust grains, there is no chemical sample preparation involved. Furthermore, the absence of a terrestrial source of glycine from the spacecraft is verified from observations before arrival at the comet. Therefore, glycine detected by DFMS has to be in this form already in the coma of the comet and is clearly not the result of contamination.

Although little glycine is released from the cometary surface, the detection of precursors to glycine formation, the organic molecules methylamine and ethylamine, is also significant. Glycine is the only amino acid known to be able to form without liquid water. Says Altwegg:

“We see a strong correlation of glycine to dust, suggesting that it is probably released from the grains’ icy mantles once they have warmed up in the coma, perhaps together with other volatiles. The simultaneous presence of methylamine and ethylamine, and the correlation between dust and glycine, also hints at how the glycine was formed.” 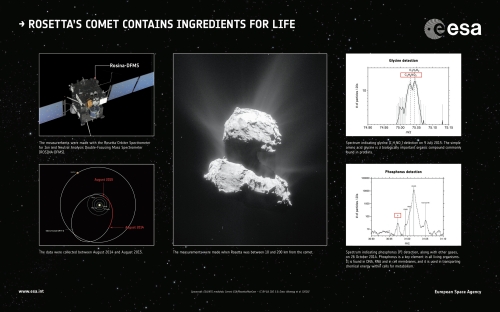 We also get word, in the paper published by Science Advances, that Rosetta found phosphorus at Comet 67P/C-G. The researchers argue that the number of organic molecules ROSINA has detected at the comet, now including glycine and phosphorus, make a strong case for comets as a delivery mechanism for prebiotic chemistry. This marks the first time phosphorus, an ingredient in the framework of DNA and RNA, has been found at a comet.

The presence of glycine, phosphorus, and a multitude of organic molecules, including hydrogen sulfide (H2S) and hydrogen cyanide (HCN), seen in the coma of 67P/Churyumov-Gerasimenko supports the idea that comets delivered key molecules for prebiotic chemistry throughout the solar system and, in particular, to the early Earth, drastically increasing the concentration of life-related chemicals by impact on a closed water body. The simultaneous presence of methylamine and the correlation between dust and glycine also suggest that the pathways for glycine formation on dust grain ices, as described for the ISM or the protosolar nebula, could also account for the cometary glycine.