Interesting news about Jupiter this morning even as the Juno spacecraft crosses into the realm of Jupiter’s gravity. It was six days ago that Juno made the transition into Jupiter space, where the gravitational influence of Jupiter now dominates over all other celestial bodies. And it will be on July 4 of this year that Juno performs a 35-minute burn of its main engine, imparting a 542 meters per second mean change in velocity to the spacecraft for orbital insertion.

The spacecraft’s 37 flybys will close to within 5000 kilometers of the cloud tops. I only wish Poul Anderson could be alive to see some of the imagery. I always think of him in relation to Jupiter because of his stunning 1957 story “Call Me Joe,” describing the exploration of the planet by remote-controlled life forms (available in Anderson’s collection The Dark Between the Stars as well as various science fiction anthologies). 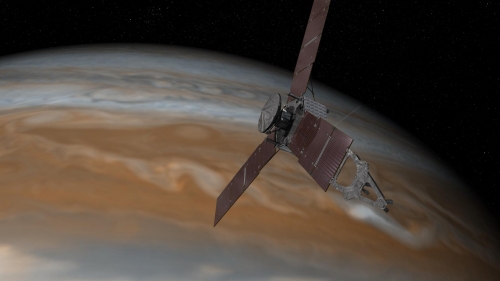 Image: Launched in 2011, the Juno spacecraft will arrive at Jupiter in 2016 to study the giant planet from an elliptical, polar orbit. Juno will repeatedly dive between the planet and its intense belts of charged particle radiation, traveling from pole to pole in about an hour, and coming within 5,000 kilometers of the cloud tops at closest approach. Credit: NASA/JPL-Caltech.

Our view of Jupiter has changed a lot since 1957, and Anderson’s low temperature, high pressure surface conditions have been ruled out, but the tale still carries quite a punch. As to Jupiter itself, today we get news that data from the Very Large Array (New Mexico) have been used to create the most detailed radio map ever made of its atmosphere. The work allows researchers to probe about 100 kilometers below the cloud tops using radio emissions at wavelengths where the clouds themselves are transparent.

Recent upgrades to the VLA have improved the array’s sensitivity by a factor of 10, a fact made apparent by the new Jupiter maps. Working the entire frequency range between 4 and 18 gigahertz, the team from UC-Berkeley supplements the Juno mission, anticipating its arrival to create a map that can put the spacecraft’s findings into context. Because the thermal radio emissions are partially absorbed by ammonia, it’s possible to track flows of the gas that define cloud-top features like bands and spots at various depths within the atmosphere.

We’re learning how the interactions between internal heat sources and the atmosphere produce the global circulation and cloud formation we see in Jupiter and other gas giant planets. The three-dimensional view shows ammonium hydrosulfide clouds rising into the upper cloud layers along with ammonia ice clouds in colder regions, while ammonia-poor air sinks into the planet amidst ‘hotspots’ (bright in radio and thermal infrared) that are low in ammonia and circle the planet just north of its equator.

“With radio, we can peer through the clouds and see that those hotspots are interleaved with plumes of ammonia rising from deep in the planet, tracing the vertical undulations of an equatorial wave system,” said UC Berkeley research astronomer Michael Wong. 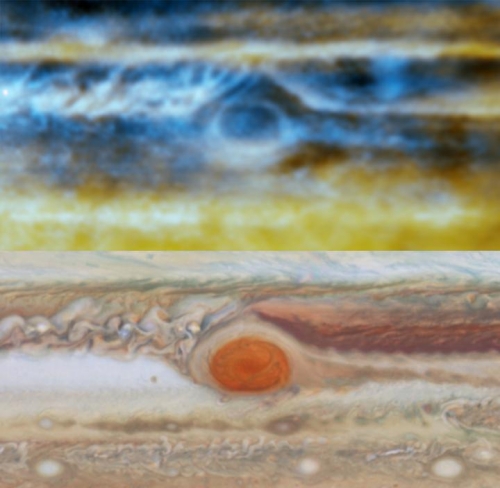 Fine structure becomes visible in this work, especially in the areas near the Great Red Spot. The resolution is about 1300 kilometers, considered to be the best spatial resolution ever achieved in a radio map. “We now see high ammonia levels like those detected by Galileo from over 100 kilometers deep, where the pressure is about eight times Earth’s atmospheric pressure, all the way up to the cloud condensation levels,” says principal author Imke de Pater (UC-Berkeley). The work is reported in the June 3 issue of Science.

Earlier VLA measurements of ammonia levels in Jupiter’s atmosphere had shown much less ammonia than what the Galileo probe found when it plunged into the atmosphere in 1995. The new work resolves the issue by applying a technique to remove the blurring in radio maps that occurs because of Jupiter’s fast rotation. The UC-Berkeley team reports that it can clearly distinguish upwelling and downwelling ammonia flows using the new methods, preventing the confusion between the two that had led to the earlier mis-estimates of ammonia levels.